I love color! What's life without some good colors to brighten it up?

The color of fire, orange expresses warmth, strength, urgency, prosperity, and vigor – suggesting optimistic movement, energy, and boldness (and hopefully, a change in the sluggish economic climate of the global recession of 2008 through 2012).

“There’s the element of encouragement with orange,” says Leatrice Eiseman, executive director of the Pantone Color Institute and guru of all things colorful. “It’s building on the ideas of courage and action, that we want to move on to better things.”

In fact, one of the many shades of orange was named as the top color of 2012 by the Pantone Color Institute. The honor was given to Tangerine Tango, a warm, glowing orange with undertones of red – think achiote on steroids!

The Color of Energy

Always the attention-grabber, it stands to reason that orange can incite people to move if they are standing still, or cause someone to stop if they are already up and about.

This is one of the reasons why sports equipment (like running shoes, workout wear, or balls) is often a bright neon orange, and why safety cones or other types of safety equipment are colored in the same shade.

Orange is also used in marketing brands. For example, many fast food restaurants include a bright orange color in their franchise locations, whether in the furniture, paint, employee uniforms, or elsewhere. Why? To keep customers moving along!

According to practitioners of chromatherapy (a method of Ayurvedic medicine), the psychological effects of orange include: 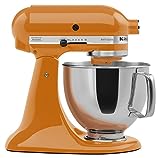 “Orange always conveys warmth and heat, deliciousness, and a certain voluptuous quality. So it works well in the kitchen."

If you plan to use orange in your home, you have a lot to choose from. Orange combines the “vivaciousness and adrenaline rush of red with the friendliness and warmth of yellow,” says Eiseman. This makes it perfect as a kitchen color.

Personally, I have always felt that the color orange has been underrated. Orange isn’t just the color of basketballs, American cheese, and prison jumpsuits… it’s also about pale peach and deep nectarine tones, the light, bright inside of a fresh pumpkin and its darker cooked counterpart, fiery pepper sauces, and the more profound tones of dried spices like paprika and cinnamon. Even golden browns are part of the orange family and should not be overlooked.

Orange suggests spice, warmth, and lusciousness. In fact, my kitchen is painted a pale peach tone and even years later I have not grown tired of the color (it’s also very flattering to one’s complexion, which makes it doubly useful). Consider pairing pale orange with a purple tone, like eggplant.

Consider painting a single wall in your favorite apricot tone to brighten up a room, or drape a variegated orange throw over your sofa. Even simply placing a few terra cotta plant pots can work wonders in a space.