I am not a big fan of the name, “Justice Department.” The implication of this title is that our legal system – cops, courts, and jails – is in the business of carrying out justice. A better title, in my view, would be the “Punishment Department.” Too often, punishment is viewed as synonymous with justice. But as anyone who has ever had a loved one physically abused, raped, or murdered knows, the punishment of the guilty party, no matter how satisfying it may be, cannot undo the injustice. This simple truth, however, has not stopped many from confusing punishment with justice in both their religious beliefs and political ideologies.

Injustice is a big problem for anyone who believes that some sort of a just god or other benign spiritual force controls and regulates the world. Monotheistic belief systems such as Islam and Christianity deal with this problem by promising that a day of judgment is coming for both individuals when they die and for the world in general in some sort of a future apocalyptic event. Things may seem unfair now, but they will someday be made right. Buddhism and Hinduism, on the other hand, believe that spiritual forces will inevitably cause people to experience the consequences of their actions. If “justice” is not carried out in an individual’s current lifetime, then it will come at some point in his or her future lives. The goal is to eventually become enlightened enough to see that the world we experience is just an illusion. Then you can be free of apparent suffering and injustice, and you will break free from the cycle of birth and rebirth.

Christianity in particular equates justice with punishment in its core theological idea: Jesus had to come to earth and be crucified in order to satisfy God’s desire for justice. Jesus, by taking upon himself the wrath of God, made salvation possible for those who believe. So apparently, when believers are rewarded and unbelievers pay the price for their refusal to repent, all of the obvious injustices in the world will be wiped away. There is a big problem, however, with this notion of justice. Even if some future day of reward and punishment comes, the injustices of the past still occurred, and nothing can ever undo the damage. Even if God is somehow able to wipe away bad memories, the pain experienced at the time that the injustice occurred was very real.

So what is the point of this little theological discussion? Am I trying to argue that we should stop punishing people because it is impossible to bring about justice? On the contrary, I recognize that punishing criminals has some very important and valuable functions. Strong punishments can deter crime, get dangerous people off of the streets, and make people who have done horrible things suffer. They cannot, however, undo injustice. The only way, therefore, of creating a more just world is to prevent crime and injustice in the first place. And while the justice system plays an important role in preventing crime, it is vitally important for a society to broaden its concept of national security and to seek out creative ways of preventing the likelihood of injustice. A strong case can be made that effective regulations and investment into education, infrastructure, and technological innovation, among other things, might do as much (or more) to enhance our security as putting tons of cops on the streets or building lots of weapons and jails. These actions may, in some cases, even cost less money. It is shortsighted, therefore, to focus too exclusively on punishing criminals and blowing up bad guys. If the goals are security and justice, then you need to be more creative and proactive. Of course, if the goals are merely to punish people and get revenge, then you can content yourself with nothing but weapons, cops, and jails.

Some people have given up on the concept of a just world. The only hope, they say, is to wait for judgment day. To me, this is both the ultimate copout and the final bailout plan. Since the world is a complicated place with difficult problems, it’s comforting to believe that some divine being or force will ultimately make things right. We are then freed somewhat from taking responsibility and doing the hard work of creatively engaging the world. And what I find particularly disturbing is that some people seem to take comfort in the fact that a lot of people are going to pay a heavy price. It will then be the ultimate opportunity to say, “I told you so” to both the blatant sinners and to the stubborn unbelievers who picked the wrong belief system (and who might have made fun of  “the faithful”).

Many people also think that God created human beings in his image. I tend to think that the reverse may be true. By creating an image of God as divine judge, we ended up with a being that deals with injustice as we do. In the end, when an individual has committed a crime, punishment is the best that we humans can do. If some divine being or force exists, I hope that he (or she, or it, or they) has a more creative and effective plan. 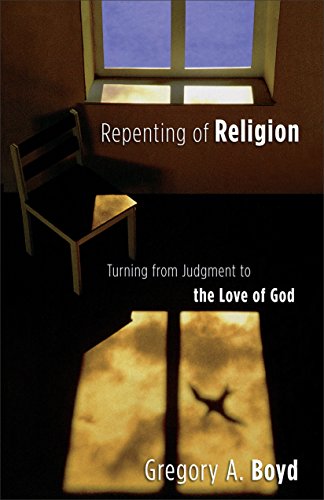 Repenting of Religion: Turning from Judgment to the Love of God
Buy Now