Many more species of animals and plants are endangered than the general public realizes. Lists of the most endangered are compiled regularly for many nation of the world and for each of the individual United States.

In the State of Ohio from 2009 - 2013, at least 23 animal species were listed as endangered, many on the federal level. Jungle Jack Hanna of the Columbus Zoo, Terri Irwin of Australia Zoo, and the Sea Shepherd group are all good examples to us to continue the battle against endangerment and extinction.

During 4th Quarter 2009, additional animals were to be added to the endangered list in Ohio, to bring the total closer to 50 species. This encompasses black bears, bobcats, several additional birds, many additional fish and clams, and additional insects and reptiles.

Those Ohio animals most endangered on the federal level currently are presented in bold print in the following list:

At the same time, Ohio has a problem with the proliferation of Zebra Mussels that crowd out other life forms - especially local clams and mussels - in Lake Erie and do structural damage in the area. From time to time, Ohio has also been overpopulated by deer.

Protecting species from extinction can sometimes be tricky in terms of balance. For instance, in the 1980s in an area of New Jersey, geese were protected because their numbers decreased quickly and were threatened by other species and hunting. After a few years of protection, they had proliferated and eaten all the local vegetation down to the dirt; this facilitated erosion that harmed other animals and plants.

Despite problems and projects of conservation in Ohio and the rest of the world, one of the most endangered groups of animals is comprised by whales. One whale species includes only 300 across the entire planet as of 2009, and some are so scare as to not be readily counted at all. 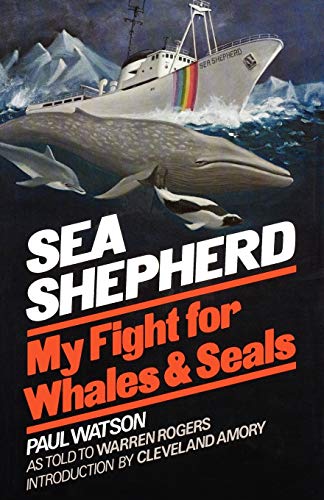 In September 2008, The Independent in the UK reported these five species as most endangered of all whale:

Around the world, we have heard the call "Save the Whales" since the 1970s. This problem was showcased in Star Trek® IV: The Voyage Home in 1986 and whales continue to be one of the most endangered species on earth in 2010. Several organizations have been founded to protect and promote the lives of whales of all varieties. One of the most aggressive is the Sea Shepherd Conservation Society.

Whales that live in the Southern Ocean are of the following species and nearly all of them are endangered or depleted, as of late 2010:

The Vernon Johns Story: The Road to Freedom
Buy Now

Vid from the Japanese Ship

During Segregation and the beginnings of the Civil Rights Era in America, a pastor in place before the renowned Martin Luther King Jr. stepped up was making news in this field. The Reverend Vernon Johns (1892 - 1965) is reported to have said, "If you see a good fight, get in it." He might support Sea Shepherd today, at any rate their willingness to fight for a good cause. Reverend Johns believed in nonviolent means, while critics of Sea Shepherd allude to the organization as a form of terrorist group.

The Sea Shepherd Conservation Society attracted global attention in 2008 - 2009 with its Cable TV show Whale Wars on the Discovery Channel. Episodes depict their campaign against the over-fishing of whales by Japanese organizations in the South Ocean of Antarctica. The SSCS also champions fish that are over culled, dolphins netted in tuna catches, and seals inhumanely slaughtered for fur.

According to the Sea Shepherd, while the Japanese maintain that they are culling only an appropriate number of whales for necessary research, the actual numbers caught and often brutally killed appear 1) excessive and 2) applied toward commercial gain instead of research. Footage on Whale Wars shows whales in the Southern Ocean sliced to shreds by inhumane hunting techniques and bleeding out into the waters.

Paul Watson and crew protested in front of the Japanese Consulate in New Zealand about illegal slaughtering whales in the Southern Ocean whale sanctuary. They are incensed at the seeming inaction of Japanese, Australian and New Zealand governments to act on this. Further, Sea Shepherd filed a formal complaint of piracy Netherlands two days ago against the captain and crew of a Japanese whaling vessel that collided with one of the SSCS ships.

News.australia.com reports: "[Acting Australian Priome Minister] Julia Gillard is the only politician who has had the courage to say something about the illegal activities Japan has undertaken; the rest of them are hiding behind Japan's kimonos as far as I can see," Mr Watson said.

Money donations have come "pouring in" to help replace the Ady Gil, since ad advertisement of the plight of Sea Shepherd was aied, starring Transformers star Isabel Lucas.

The most enraging factor for critics may be that Captain Paul Watson enlists the aid of the media in a number of ways and gets it.

The Crocodile Hunter: The Incredible Life and Adventures of Steve and Terri Irwin
Buy Now

The SSCS is a non-profit group headquartered in Washington State's Friday Harbor.

Its members are directly confrontational toward acts of animal abuse and poaching and the team goes out in search of these events. The SSCS has sailed several ships for this purpose and its most active currently are the Steve Irwin and the Bob Barker.

Steve Irwin, former operator with wife Terri Irwin of Australia Zoo until his accidental death on Labor Day 2006, had been examining the possibility of joining efforts with Sea Shepherd to help save whales. After his death, one of the SSCS was renamed in his honor. Long time TV host Bob Barker donated $5,000,000 to purchase the ship that was then named after him.

Mr. Paul Watson founded Sea Shepherd in 1977, having been a member of Greenpeace and active - aggressive active - in conservation. He gains financial support from corporations, the lecture circuit, celebrities and financial grants, along with written recognition from the Dalai Lama. Crew members are volunteers. In footage from Whale Wars, Mr. Watson states that he wants people that want to be there, not those dependent on a paycheck. Less than 10% of total revenues are applied to a small personnel payroll. Captain, crew, and celebrities that ride along and protest beside Sea Shepherd deeply believe in their mission to save wildlife and sometimes incur arrest from local constabulary and physical assault and injury from fishermen, sealers, and poachers. As of 2010, they have been so doing for 33 years.

While outside agencies call their tactics too violent, candid shots of the Sea Shepherd crew on board the Steve Irwin have shown them crying after seeing whales they tried to save killed at sea by Japanese fishermen. SSCS maintains that they must be aggressive against species endangerment and the broken international treaties that were written to protect wildlife. Certain species of whales are particularly endangered and without action to prevent their extinction, the Earth will lose them.