The island was originally known as “big Island,’ then as Rock Island, and finally now it is know as Arsenal Island

If you visit the Rock Island Arsenal or pass it going by way of the government bridge you will pass the replica of the Fort Armstrong blockhouse that represents what preceded the arsenal.

It is built near the tip of Arsenal Island overlooking the Mississippi River. It is a smallish wood blockhouse-part of a fort is a familiar landmark to people passing between Davenport, Iowa and Rock Island, Illinois. However very few, including myself when I worked there, know how the building got there or why.

In 1816 a chain of frontier defenses were built after the War of 1812. Fort Armstrong was built five miles from the principal Sac and Fox village, which was on the Rock River in Illinois. The Fort was on at the foot of Rock Island, Illinois in the Mississippi River.

The fort was 300 feet square and completed in 1817. It was the military headquarters in the Black Hawk War. It usually had about two companies of United States regulars.

In 1805 President Jackson sent an expedition to determine strategic sites for forts. One of these they called “big island” and was reserved by Congress for military use and called Rock Island. The Sauk Indians considered it to be a sacred Island.

“ When we arrived we found that that the troops had come to build a fort on Rock Island. This, in our opinion, was a contradiction to what we ha done---‘to prepare for war in time of peace.’ “ Chief Black Hawk

September 21, 1832 the Black Hawk War officially came to an end and a treaty was approved at Fort Armstrong.

During the Civil War a Prison Camp was maintained on the Island.

In 1850 the first bridge, known now as the government bridge was built. It is unique because it has a swing to let river traffic through. Jefferson Davis, who later became the president of the Confederate states, was secretary of State under President Franklin Pierce initially approved the bridge. Later he opposed it.

The Island is currently the home of Rock Island Arsenal and is host to several other government and some non-government tenants. Most prominent of these is the Tank and Automotive Command (TACOM) whose main headquarters is in Warren, Michigan. 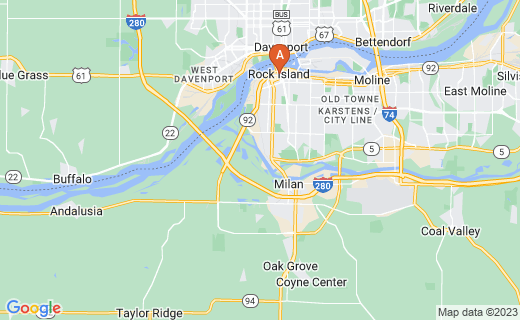