George Read’s grandfather was a wealthy resident of Dublin, Ireland whose son, John moved to the Maryland colony about 1726.

The Read’s appear to have been a part of the English aristocracy in Ireland. These people were English whose ancestors had moved to Ireland and put down roots in Ireland.

Unlike the native Celtic Irish who were predominantly Roman Catholic in religion or the Scot Irish, also of Celtic origin, who had been moved to Ireland in the seventeenth century by the British and were predominantly Presbyterian or other Calvinist persuasion, these English in Ireland were generally Anglicans and were often wealthy landowners or merchants.

Born in Maryland and Grew Up in Delaware

George Read was born in Cecil County, Maryland on September 18, 1733 to John and Mary Howell Read.

As a young man, George studied law in Philadelphia, Pennsylvania and was admitted to the Philadelphia Bar in 1753. A year later he returned to New Castle, Delaware and set up his law practice.

Married the Sister of Another Signer of Declaration of Independence

In 1763 George Read married Gertrude Ross Till, a widow, who was the daughter of the Reverend George Ross, the Anglican Rector of Immanuel Church in New Castle.

Gertrude was also the sister of George Ross who would also sign the Declaration of Independence in 1776. 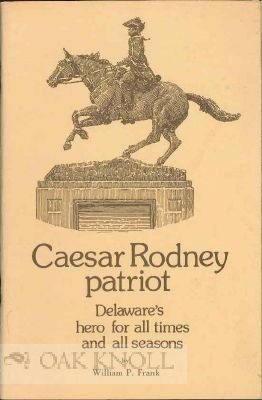 CAESAR RODNEY, PATRIOT, DELAWARE'S HERO FOR ALL TIMES AND ALL SEASONS.
Buy Now

A Moderate Who Initially Opposed Independence

Like other lawyers in the colonies, George was active in public affairs but, as tensions between the crown and the colonies began to deteriorate, he tended to side with the moderates who sought to resolve problems and maintain good relations with the King.

Read, while active in the political debates leading up to the Revolution, remained opposed to a break with England right up to the debate over independence.

Even though he was a member of both the First and Second Continental Congresses, he frequently did not attend the sessions and was reluctant to join those advocating strong action against the King.

When Congress first voted on independence on July 2, 1776, Read was among those opposed to the resolution.

It was because of Read that Caesar Rodney, Delaware’s third delegate to the Congress, who was home in Delaware at the time of the debate, was forced to make his famous overnight horseback ride to Philadelphia in order to break the deadlock in the Delaware delegation between Thomas McKean and Read.

With Read opposed to independence and McKean in favor the Delaware vote was split leaving the colony unable to cast its vote one way or the other.

With the pro-independence Rodney present the Delaware delegation became two to one in favor of independence.

Despite his no vote on the issue of independence, Read did step forward and signed the Declaration of Independence after it had been approved by a majority of the colonies.

George Read appears to have been a moderate who, while supporting the colonist's desire for liberty and agreeing with many of their complaints against the abuses by King George III and the British Parliament, felt that war and total independence were not the answer.

War is always a big step and, to men like George Read, seemed like a radical solution to their current situation.

However, his sympathies were with those supporting liberty. With the nation already in open rebellion against England, Read had no choice but to either join the step toward independence or side with those (known as Loyalists or Tories) who were joining with the British and taking up arms against the rebels.

Read remained active in both national and state politics.

He was a member of the Constitutional Convention after the Revolutionary War thus making him one of the few founding fathers who signed both the Declaration of Independence and the Constitution.

After the ratification of the Constitution, George Read was appointed the first Senator from Delaware by the legislature (originally Senators were appointed by state legislators rather than by popular vote as they are not elected).

George Read died on September 21, 1798 at his home in New Castle, Delaware.