How to Deal or Cope With Failure

We all fail at something at some point in our lives. We may fail to make the grade at school, may lose a job, may lose the love of our life, among other things. As you have success, you have failure. They are two sides of the same coin. You can't have one without the other, even though you wish you experience only successes and no failures. Failure is a fact of life. It is always lurking just around the corner and you have no choice but to learn to deal with failure, if you are to be successful. So, how does one deal with failure? Here are some ways you can deal with failure and turn your failure into a success.

Don't Brood Over the Causes:

A lot of people can't help themselves from dwelling over the reasons for their failure. While it is important to learn from mistakes you've committed that may have contributed to the failure, dwelling on it excessively can be mentally exhausting. Doing so will just make you more miserable. Instead, make a few points of the reasons for your failure and resolve to learn from them and avoid repeating them.

Don't Go Into a Shell:

Another classic pattern found among people who've experienced failure is the tendency to go into a shell. This is understandable but not desirable or healthy. When you cut yourself off from friends and family and cocoon yourself in your own little shell, all you do is to magnify many times over the failure you've suffered. When you are alone and don't share your feelings, you feel the burden of failure weighing on you more. Instead, keep the channel of communication open. Don't cut yourself off from the world. Yes, you failed, but remember it is just a failure and not the end of the world!!

Think Of Your Past Successes:

When your failure has you down and depressed, the best way to lift your spirits is to think back to the times when you were successful and achieved success. Apart from making you feel better, it might also help you rediscover some of the things that led to your past successes.

Think of Your Past Failures:

This might seem like a stupid suggestion. However, thinking about your past failures might help bring back memories of how you coped then and how you turned that failure into a success. Also, think about the many successful moments you had between your past failure and your present one. It would help motivate you to get out of your present failure.

Know That Failure Is Good Too:

You many not normally look upon failure as a good thing, but it is!! Of course, you don't wish failure upon you, but if you do fail, there are just so many things that you can learn from it. Failures always teaches a person valuable life lessons. It prepares you better and makes you a more complete person. If you look back at your many failures, you would realize that had some of those failures not happened to you, many of the good things that subsequently happened wouldn't have happened either. It is surprising that the thing that you thought at the time as the worst thing to have happened to you, turns up becoming the best thing to have happened to you.

Have Faith in You:

Believe in yourself, despite your failure. Know your capabilities and have belief in them. Don't doubt yourself. Don't trash talk yourself into believing that you are no good because of your failure. Instead, keep the faith. Know what you are capable of and know that one failure doesn't change your inherent strengths.

Plan for the Road Ahead:

Failure does not mean you sit back and relax or waste your time. Failure offers you a break to reassess your priorities and your goals. Make a plan of how you hope to overcome your failure and reach your goals and set about following that plan diligently. Never give up hope!! 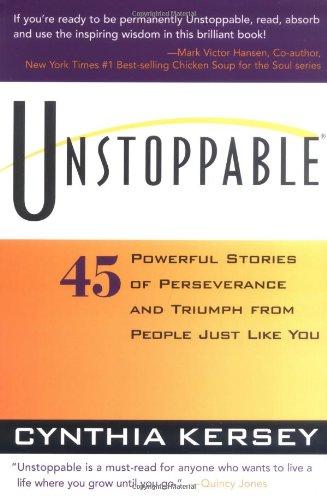 Unstoppable: 45 Powerful Stories of Perseverance and Triumph from People Just Like You
Buy Now

The Power of Failure: Succeeding in the Age of Innovation
Buy Now