This was not an easy interview to conduct. Yes, I still possess those supernatural powers that enable me to interview undead celebrities like Genghis Khan, Jack the Ripper, and James Dean. And I have retained the ability to talk with weird animals like the Proboscis Monkey, the Star Nosed Mole and the charming Hippopotamus.

But this interview was much more difficult. Like you, I had always believed that Mother Goose was a legend and not a real person. Was I dead wrong, you'll pardon the expression? Please read on to discover the amazing facts. 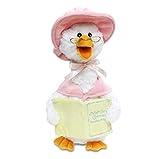 me – My voluminous, painstaking research has led me to find you. Are both of you really the famous Mother Goose?

Queen Bertrada II of Laon – Oui, je suis elle. Yes, I am she.

me – My French leaves a lot to be desired. May we do this in English?

me – You are both former queens of France and both your names in English are Bertha?

I am Mother Goose

Bertrada – That is correct. My full name is Queen Bertrada II of Laon and I married Pepin, the Short, the King of the Franks, in 740 A.D.

The people called him Pepin the Short because he resembled Danny DeVito in stature.

I am Mother Goose. My subjects called me Queen ‘Goose-foot’ because one of my feet was larger and shaped somewhat like the foot of a goose.

But it was not webbed no matter what anyone says. As you can plainly see . . . if I remove my large, oversized shoe.

I have another claim to fame as well. I am the mother of Charlemagne, my over-achieving son, who became the founder and ruler of the Holy Roman Empire.

And he was home schooled . . . by me. I was known as a devoted patroness of children.

I am the genuine Mother Goose.

Berthe – Attendez un moment! – wait a minute! Bertrada is always bragging. My name is Queen Berthe de Burgundy and I married King Robert II of France in the 10th century.

I am the genuine Mother Goose. I was known by my subjects as la mère d’oie – Mother Goose – a charming ‘bird-mother’ who spent my days 24/7 sharing enchanting fairy tales and rhymes with the local children.

Bertrada – When one speaks the truth, Berthe, it is not bragging. N’est-ce pas? And speaking of the truth, didn’t you get the nickname of Mother Goose because you gave birth to a child whose head was shaped more like that of a goose?

Berthe – That is a despicable lie, an untruth. It is true that my husband and I were close blood relatives, first cousins in fact, but my child did not resemble a goose. That is one of those urbane legends.

me – Your Royal Highnesses, do not be upset. Everyone who has ever enjoyed Mother Goose rhymes owes you both a debt of gratitude.

Since I am privileged to interview you both at the same time, I would like to get your impressions of some of the Mother Goose rhymes that I believe to be rather harsh and sadistic. I’m thinking of “Rock-A-Bye Baby” for example.

“Rock-a-bye, baby, in the tree-top. When the wind blows, the cradle will rock.

When the bough breaks, the cradle will fall. Down will come baby, cradle and all.”

What kind of a sweet lullaby is that to croon to a baby? The child could have nightmares for the rest of its life.

Bertrada – I have pondered on that very subject. In fact I rewrote it before I sang it to my sweet Charlemagne. Here is what I sang:

Rock-a-bye, Charlie, in the tree-top. When the wind blows, the cradle will rock.

If the bough breaks, the cradle will fall. But Mommy will catch Charlie, cradle and all.

Berthe – That was very clever, Bertrada. Isn’t this a coincidence? I did something of the same sort when I rewrote “Three Blind Mice” to sing to my sweet baby who passed away before his first birthday.

You remember how it goes:

These lyrics are ridiculous as well as frightening to a small child. How could the mice run after the farmer’s wife if they were blind? And if she had cut off their tails wouldn’t they be running from her instead of after her? And why even mention blindness to an innocent babe?

Kermit, the Muppets and the Old Woman in the Shoe

me – You are both so imaginative. Thank you for sharing your revised rhymes. I have a few updated Mother Goose rhymes of my own to add. Do you remember this one?

There was an old woman who lived in a shoe,
She had so many children, she didn't know what to do;
She gave them some broth without any bread,
She whipped them all soundly, and put them to bed.

Now what kind of a mother is that? Because she is overwhelmed and distraught, she deprives her children of the whole grains they need to grow, whips them and puts them to bed. I prefer my version:

The Old Woman Who Lived in a Shoe

There was an old woman

Who lived in a shoe.

She had so many children

She didn't know what to do.

So she sent seven of them to college

To get education and training.

The first is a famous weatherman

Who can tell you when it is raining.

The next went to law school.

Are you now all ears?

He will get you out of jail

If it takes twenty years.

One daughter became a chef

For a spot that is trendy.

Where does she work you ask?

The oldest is in real estate,

He sold the Brooklyn Bridge

Another son is a doctor,

With a practice that is new.

If you are at death's door,

He will pull you through.

Accounting is what one son chose.

To work he wears a tie and jacket.

How do I know what work he does?

He said he's in the numbers racket.

One son became an entrepreneur.

He started Stop and Shop you see.

Then he merged with the A&P group.

What happened to the Old Woman?

Save your concern and your pity.

She is supported by all seven kids

And lives in a penthouse in the city.

Kermit, the Muppets and Jack and Jill

me – Berthe, Bertrada – your laughter and applause encourages me to share with you my version of “Jack and Jill.” You remember the original:

Jack and Jill went up the hill,
To fetch a pail of water;
Jack fell down, and broke his crown,
And Jill came tumbling after.

Was Jack taken to the hospital in time to repair his skull fracture? Was Jill critically hurt as well? Why worry little children with such a sad story? I rewrote it for grownups:

Jack and Jill went up the hill

To fetch a pail of water.

Jack ran down and then left town

When Jill said, “I’m with daughter.”

Bertrada – I’m so glad you found me to interview. And I want to add, Berthe, I apologize for my unkind remarks about your baby. Every baby is beautiful to its mother. I am sorry for your loss.

Berthe – I accept your apology and condolences. I know you were not bragging. Charlemagne was in fact a brilliant, exceptional son. (They both embrace)

me – Thank you for the interview, Your Royal Highnesses. What do you say we all go to dinner at the little French café down the street – La Vie en Rose? Speaking of 'rose,' I just thought of a dandy 'grown-up' revision for "Roses are Red, Violets are Blue, Sugar is Sweet, And so are you." It goes like this:

Before we say Adieu ... I would like to share with you ... the quote that keeps me sane ... By my hero, the Mark Twain: "Humor is the great thing, the saving thing. The minute it crops up, all our irritation and resentments slip away, and a sunny spirit takes their place."

Footnote: Most of the rhymes and tales included in any Mother Goose collection are thought to have originated in the distant past as folk stories told to children. If there were an actual Mother Goose, she could have been either Bertrada or Berthe.

Most historians, however, believe that the nursery rhymes and fairy tales were oral narratives passed down from generation to generation by peasant families in France.

The first book of fairy tales using the name, “Mother Goose,” was produced by Charles Perrault, a French publisher in 1697 and translated into English around 1729.