It only takes a second to change your life 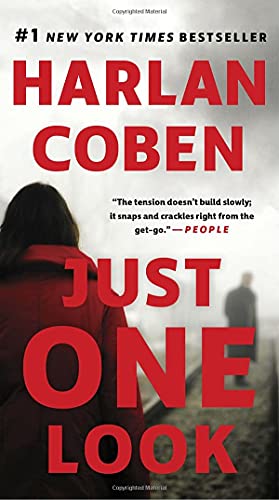 This last week was a border run week, which for us means hopping onto a cheap flight and scooting up north one hour into Thailand to relax at our favourite beach resort for a week.

Actually we only need to be out of Malaysia for a 24 hour period, but Nia Yang is worth spending a week at and makes a welcome change from Penang.

My reading material was mainly Harlan Corben, who I have just discovered and am consuming at a rate of knots... he has more twists and turns in his stories than one could imagine possible, and seems normally to provide three distinct ends to the story, that is, you get to the conclusion and think, that was good, then you reach the second revelation of the story that you never thought about and think, crikey, that was clever, and THEN you turn another page and find out the real finale to the story.... very striking in his delivery is Mr Corben.

So what has this to do with the hub title?

Lot's actually, you see his works also seem to spin on why just one short second of activity can shape a whole life history.

And everything can change.

This was brought home to me in Phuket, which you may remember was where many people died when the tsunami struck there on 26th December 2004. The hotel we were staying in is one which was closed due to extensive damage when that tsunami hit.

We stay on the third floor! but you wonder despite the chances of a second tsunami being remote.

Life can truly change in seconds, you can be a penniless truck driver one second and richer than your wildest dreams a second later if that lottery ticket is drawn.... or you can be the possessor of everything you could possible want but killed or worse maimed by a falling piano the next second.

Lifes' lottery or Gods will?

Well whatever you wish to believe or disbelieve, you have no control over things that happen around or too you, what you do have control over is how you will react or respond to those circumstances.

You can let circumstances control your life, or use them to shape your life.

Ironically I remember standing in our house in Spain in December 2004 discussing whether we as a family should make the long haul (and expensive) flight to Phuket for that Christmas, I fancied a Christmas in the sun at an 'exotic' location.

We decided to stay at home and have a 'tradtional' Christmas in our house halfway up a mountain near Ronda.

When I saw the devastation and loss of life on Boxing Day 2004, I was struck on how close to death we may have come.

My wife cannot swim and has a phobia about water since an early water accident, but she loves lying on the beach, my daughter was 3 years old, my son was 15 and loves water, snorkeling and would have been out looking at the coral reef, and I, well I would have been trying to decide who to save IF I had even seen that tsunami approaching.

As a believing disciple of Christ I will say that God's Grace protected us, from the deception that the enemy attempted to bring to our table with the thought that going to Phuket was a good idea.

If you are not a believer you will never agree there, so lets pass onward.

Why not listen whilst reading....

Lets move on towards that mark of the beast caption up top of the article.

Bible scholars have argued for centuries over the significance of 'the mark' so I will not add to their attempts to decide what it constitutes.

But it will happen, and so when I see that the events occurring lead nearer to the ability to mark EVERY individual with a 'mark' (or number) without which you cannot trade (and therefore cannot exist within 'society') I perk up my ears and take a considered look, rather like I was aware that a tsunami could happen again in Phuket when I stayed there, I am also aware that we MAY be the generation who will see the end of this world as we know it, witness Armageddon, or live through the Tribulation, or escape ALL of those things in the Rapture.

Our personal eternal existence may depend on what can occur in a split second.

I spend much time dealing with what is called 'KYC' which is gobbledygook for Know Your Client, which in turn is a concept that has grown to strength since the 9/11 'event' took place.

Right now the authorities have the ability and legal right to examine EVERY transaction you do that involved electronic funds, so your bank account, debit cards and credit cards are all an open book to anyone who has the 'authority' to demand a copy or who has the legal right to access ANY electronic record directly, without your consent and in most cases with no need for a court order.

In effect if anyone wants to do any transaction in business, then we (those offering financial services or products) need to do KYC on new clients, and that consists of requiring they send us a copy of an identity document and a utility bill to prove both identity and address.

I am so used to this now that I have all my KYC docs kept on my computers, laptops and stored in cyberspace in my gmail account, so that when I am (frequently) asked I can send them immediately to the requirer.

I also have my KYC docs notarial stamped so that even the more pernicious request will accept them, but despite that I still on occasion am required to provide a lawyers letter testifying to my 'integrity and honest' as well as a letter from a registered professional declaring that the image on my passport is a true representation of me.

Guess you can see why I am wary when I see advances on this type of data gathering.

Right now the authorities have the ability and legal right to examine EVERY transaction you do that involved electronic funds, so your bank account, debit cards and credit cards are all an open book to anyone who has the 'authority' to demand a copy or who has the legal right to access ANY electronic record directly, without your consent and in most cases with no need for a court order.

Welcome to the land of Homeland Security and the Bank Secrecy Act, which was strengthened with the advent of the USA PATRIOT Act.

Your world has NO PRIVACY when it comes to your financial life, and in effect we have already put in place all of the required legislation to allow those who are empowered to stop anybody who was considered 'persona non gratia' to transact any business or even have access to their own funds.

Was September 11th 2001 the second that al this changed, I don't think so, that second was planned for decades and put into effect way before that date, 9/11 was a convenient (and some would say too convenient) date and situation that allowed the 'powers that be' to instigate dramatic control measures that were able to be put in place as the public were crying out for order out of chaos.

Watch the following video by Derek Prince, who died in 2003.

This video is at probably 20 years old, and in it Derek tells us of 'things to come' which have now come and are still coming at us.

It's a long video, but worth taking the time to watch, if you are a believer, and especially if you are NOT a believer.

There are two parts, watch both.

If you are an impatient sort of person, let the video load and move forward to 19.00 mins (you will miss some good stuff, but if your brain thinks 'microwave' technology, at least get the main bit of the video)

It only takes a second to get it right or wrong.

For better, or worse

It does only take a second to change your life.

Whooooaaa did you just read a Christian believer saying fighting the New World Order was dumb!

Yes indeed you did, and here's why, you see scripture tells us clearly that these things WILL come to pass, and therefore if any believer try's to fight them taking place, they will be in opposition to both God and the New World Order.

Yep, that would be dumb!

But that does not mean we should accept the 'mark', whatever that turns out to be, no that would be dumber still.

Whatever the mark is, it will involve not just 'the mark' but also an oath of loyalty of allegiance ti the charismatic person who will be identified (by believers) as 'The AntiChrist' and this character will be worshipped freely by most of secular humanity, who will truly see him as a form of 'saviour' (thought not in a religious sense of course) as he brings the world together into a period of peace and harmony after it has been shaken for a while.

It is my belief that we are in that period of shaking already, and that God is shaking all things which can be shaken, in order that people will decide whether Christ or the world is the correct entity to place your trust in, and that decision will be THE split second that affects everything else in our lives.

My split second was nearly 20 years ago, and it did indeed change my life, and we have indeed been shaken by God during that time, and at times following God has been like trying to tame a wild horse (and no I am not saying God can be tamed or is a wild horse) where perseverance and an ability to ignore the pain and bruises bears dividends with time and patience.

No pain, no gain comes to mind.

God chastises those He loves, in order that they may gather strength, but He never troubles us beyond that which He knows we can bear, so provided we hang on in there, and TRUST God, He will bring us out of the mire stronger and better able to stand firm when the enemy comes after us with ill intent.

The Coming Economic Earthquake: Revised and Expanded for the Clinton Agenda
Buy Now

Check it out for yourself: http://www.usdebtclock.org/