Although the Pendle Witches are probably the best known of the witches tried for practising witchcraft in Lancashire in the 17th century, there were others who deserve our attention due to the ordeal they went through and in some cases the terrible punishments they received.

The main cluster of witch trials in Lancashire took place in 1612. James 1st had been on the throne since 1603. A staunch protestant, he was intolerant of Catholics and witchcraft. He had even published a treatise on the occult called ‘Daemonologie’ and passed an act of parliament condemning those convicted of witchcraft to death.

Strictly speaking not a Lancashire witch at all; Jennet Preston lived in Gisburn, which in 1612 was in Yorkshire (a county boundary change in 1974 means Gisburn is now in Lancashire). However, Roger Nowell heard evidence that she had been at a meeting with the Pendle Witches. Because she was from Yorkshire her case was heard at the York Assizes on July 27th 1612. She was charged with murder by Witchcraft of a man who had died four years earlier and the jury were also told about her meeting with the Pendle Witches. She was found guilty of causing death by witchcraft and hanged.

Knowing that a woman, who had met with them, had been found guilty and hanged just days earlier must have been terrifying for the Pendle witches.

These were three women from Samlesbury who were tried for witchcraft in the middle of the Pendle witch trials. They were:

Jane Southworth – a widow. Her dead husband was the son of the owner of Samlesbury Hall.

Crucially, during the trial, Jennet was found to have been ‘groomed’ by a priest to testify against these women and they were found ‘not guilty’. The priest was known to have travelled through Europe and is likely to have picked up his knowledge of witchcraft practices from there.

Thomas Potts included the Samlesbury witch trials in his book the wonderful discoverie of witches in Lancashire. The suspicion is that he did this to highlight how fair the trials were and how determined the judiciary were to distinguish between innocent people who were falsely accused and the truly guilty.

Margaret Pearson from Padiham was accused of killing a horse by witchcraft. Evidence was given by Chattox of Pendle (herself accused of witchcraft) and another Padiham resident. Margaret was found guilty and given a punishment of one year in prison and 4 days in pillory. The pillory was two blocks of wood, one on top of the other with holes for the occupant’s arms and neck. Once fastened down the occupant would be stuck in there and the object of ridicule to passers-by.

The pillory and stocks were common punishments in Britain in the 1600s. Pillories were wooden blocks with arm and neck holes trapping the occupants in place whereas stocks had leg holes. They were usually in a busy place such as a market so that the prisoner could be humiliated in public - hence the phrase 'he was the laughing stock' and the verb pilloried.

Isobel Robey from Windle was accused of causing sickness (not death) by witchcraft. It was claimed that two of her victims had called upon wise men to break the spell. In spite of the fact that one of the wise men had concluded that Isobel Robey wasn’t a witch the evidence convinced the judge at the trial and she was found guilty of causing sickness through witchcraft and hanged alongside the Pendle witches.

The Home Locations of those Accused in the 1612 Lancashire Witch Trials. 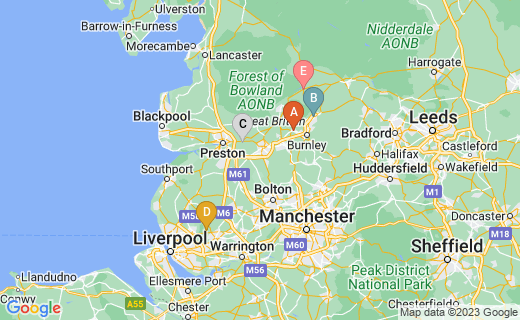 The home of 9 people accused of witchcraft.

The home of Jane Southworth, Jennet and Ellen Bierley

The home of Isobel Robey

The home of Jennet Preston

In 1633 at least 17 Pendle inhabitants were taken into prison and then tried at Lancaster having been accused of witchcraft. A lot of the evidence came from an 11 year old boy. Interestingly, one of the accused was Jennet Device, whose evidence had condemned her own brother, sister, mother and grandmother to death during the Pendle Witch Trials of 1612.

In February 1633, 17 of those accused were convicted of witchcraft and a report sent to King Charles 1st who had succeeded the throne from his father James 1st in 1625. He summoned four of these down to London, including Margaret Johnson who had freely admitted to being a witch.

The boy and his father and uncle were also brought down to London. Further questioning lead the boy to reveal that his evidence was false and his father had encouraged him to make the story up. Since physical examinations of the accused had also failed to reveal evidence that they were witches, they were acquitted.

This whole process was painfully slow – the medical evidence was dated July 1635 and in 1636 it is known that some of the original 17 were still being held in Lancaster Prison.

The Wonderful Discovery of Witchesmodernised by Robert Poole 2011