The ‘Pendle Witches’ and ‘Pendle Witch Trials’ are a piece of local history which was of national importance and still has relevance to the modern world given the skewed picture that media attention can give to public about any event and the continued existence of prejudice despite laws being in place to try to eradicate it. They were part of a cluster of trials revolving around Lancashire people accused of witchcraft in the 17th Century.

Where the Accused Pendle Witches Lived 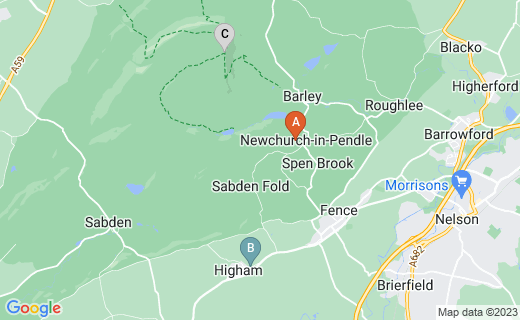 The home of Demdike and the Devices

The Home of Chattox and her family was near here

Who Were the Pendle Witches?

Elizabeth Device’s son and daughter Alizon and James Device – believed to be in their teens or early 20’s.

Although the trial physically brought the two families together, it is recorded that before then they had fallen out with each other over some clothes and food that Chattox's family had supposedly stolen from the Device's house.

The Samlesbury Witches were three women tried for witchcraft in the middle of the Pendle witch trials. Although from Lancashire, they were not residents of Pendle and the case was a wholly separate one.

Justice Bromley - The presiding judge at Lancaster assizes when the Pendle witch trials were heard.

Thomas Potts – Clerk of the Court and tasked with showing the justice system in good light wrote a first-hand account of the trial and the events that led up to it called ‘The Wonderful Discovery of Witches in the County of Lancaster’.

Roger Nowell – Local magistrate who chose to investigate the rumours of witchcraft – possibly because it was an astute political move at the time.

John Law - a pedlar and key witness in the case against Alizon Device. He gave evidence that she had cursed him and caused him to collapse in the road and lie paralysed feeling as though knives were pricking him all over.

Lancashire in 1612 was a remote and wild area. Stricken by several years of poor growing weather there was little food and many people resorted to begging to survive – often begging from their just as destitute neighbours and falling out with each other as a result.

King James 1st had published a treatise on witchcraft and Spirits called ‘Daemonologie’ and passed an act condemning those convicted of witchcraft to death.

People currying favour with the protestant king sought to stamp out pockets of Catholicism which, especially in rural areas like Lancashire, had become somewhat mixed in with superstitious practices or the sort which might loosely be described as witchcraft.

The majority of people, uneducated and poor would have probably brought in to the ideas of hell and eternal damnation and the possibility of salvation after death if you confessed to sins. The educated and well off used as a way to control those less fortunate.

Witch trials were happening throughout Europe and America in the 17th Century. At the same time as the Pendle Witch trials people from other areas of Lancashire and from Yorkshire were being tried for witchcraft.

Even then witches were stereotyped as being old crones – Thomas Potts comments that winkles on an old woman’s face are good evidence of a witch. At 80 years old and unavoidably wrinkled, this put Chattox and Demdike at an immediate disadvantage.

What Were the Accusations?

It’s impossible to be confident about what the accused did given that according to Potts they confessed to and accused each other of all sorts of extraordinary and unlikely things such as hearing dogs talk and being pushed in to a ditch by a spirit. In all probability they were not so much witches as ordinary, frightened and superstitious people trying to make sense of a harsh world. Their time in prison in foul conditions would have weakened their resistance further. At the trial they were charged with the following:

Chattox- causing the death of a man by witchcraft

Elizabeth Device – causing the death of a man by witchcraft

Anne Redfearn – causing the death of a man by witchcraft

Alison Device - causing illness and disability to a man through witchcraft

In March 1612, Roger Nowell began questioning suspects about their activities and their neighbours activities relating to witchcraft. Unfortunately having existing grievances Demdike and Chattox implicated each other and their families. They accused each other of killing people by witchcraft and spoke of visitations by spirits. According to Pott’s report they also confessed to their own acts of witchcraft.

Roger Nowell decides he has enough evidence to charge Chattox, Demdike, Alison Device and Anne Redfearn. They are held in Lancaster Castle dungeons.

April 6th 1612 Elizabeth Device meets with friends, relatives and allies of the accused. Roger Nowell, upon hearing of this questions many of these people some of whom confess to witchcraft and some of whom are implicated by the evidence of others – including star witness 9 year old Jennet. Ten of these are imprisoned in the dungeons with the four others. Demdike dies in prison.

August 1612 - The judges arrive at Lancaster to preside over prosecutions within the county, a procedure known as assizes.

Chattox initially denies, but ultimately confesses and is convicted of causing death by witchcraft. Elizabeth Device vigorously denies causing death by witchcraft but is convicted, partly with evidence given to the court by Jennet – her 9 year old daughter. James Device pleads not guilty but is found guilty as charged. Anne Redfearn charged and found guilty of killing a man by witchcraft although she denies this consistently. Alison Device is charged and after evidence from the man she is charged with cursing, she confesses and is found guilty.

Four of the other accused witches - Jane and John Bulcock, Katherine Hewitt and Alice Nutter are charged and convicted of witchcraft.

All five charged ‘Pendle Witches’ and their associates – the four other ‘witches’ from just outside Pendle, plus one other convicted in a separate case, are condemned to death and hanged.

Demdike was not charged because she had already died in prison before the trial.

Whilst it is shocking to us that someone could be tried, sentenced to death and executed in the space of two or three days. For the time the court system was quite advanced, reasonably thorough and considered quite highly.

A Play about the Pendle Witch Trials

Following extensive research using all available resources about the witch trials, Richard MacSween, Lancashire author and playwright has written ‘Devilish Practices’ an engrossing new play about the Pendle Witches. It brings a fresh perspective to the story of the Pendle Witches and gives the audience an insight into the lives of some ordinary Pendle people who suffered a terrible injustice 400 years ago.

I was fortunate to be invited to a rehearsal of the play which was unveiled to the public in Colne Muni in May 2012.

Devilish Practices is performed by Pendle Borderline Theatre; a local company of Lancashire actors, and therefore spoken in authentic Lancashire accents. Even in rehearsal I was quickly drawn into the lives of these very ordinary families and could feel the appalling shock that the accused witches must have felt upon being dragged into the court at Lancaster and condemned to hang.

By cleverly incorporating music and songs into the play, Richard has allowed the viewer breaks from the intensity of emotion which the play invokes. This also helps make the heart rendering story accessible to everyone.

Devilish Practices will be well worth attending. Whether you are a local person eager for a fresh view of a familiar story, a visitor to Lancashire keen to understand something of the county’s past or someone intrigued by the history of witchcraft in England, the play will leave you with your preconceptions broken down and replaced by a sympathetic understanding about what went on in Lancashire in 1612. And if that all sounds a bit serious, don’t worry – you will have a good time watching the play too!

An Excerpt from 'Devilish Practices' in Rehearsal

18th August 2012 In an interesting development, to commemorate the Pendle Witches, overnight the numbers 1612 marked out in white have appeared on the side of Pendle. Local gossip has suggested that Moorhouses Brewery might be have something to do with it, but whilst they do have a petition going, campaigning for the government to pardon the Pendle Witches, their website makes no mention of the numbers on Pendle. Who else might have done it? I don't know, but I shall keep my ears to the ground!

"Firing, The"
a novel by Richard MacSween playwright of Devilish Practices
Buy Now

The Wonderful Discovery of Witches modernised by Robert Poole 2011