It has tiny see-through pectoral fins and a dorsal fin that it uses to swim with and a leafy tail. It resembles the mythical dragon yet only grows from ten to twelve inches long. The Leafy Sea Dragon's appendages can change color to help camouflage it as it drifts lazily along with the ocean currents.

It is related to the pipe-fish and uses it long snout to suck-up plankton and small crustaceans that are part of its diet. Its range is in the Southern Seas off the coast of Australia and it also eats small shrimp known as mysids and amphipods.

The male of the species care for the eggs for nine weeks until they hatch which are squirted onto its tail by the female. They turn a bright purple before hatching and are helped in the hatching process by the male as it shakes its tail and rubs it against rocks, coral and seaweed in the surrounding water. This process can take up to 48 hours to occur and has never been duplicated in captivity.

They are extremely slow swimmers and are on the endangered species list as they are routinely captured by divers for private aquariums. The Leafy Sea Dragon is the official marine emblem of the State of South Australia.

The Southern Waters of Australia 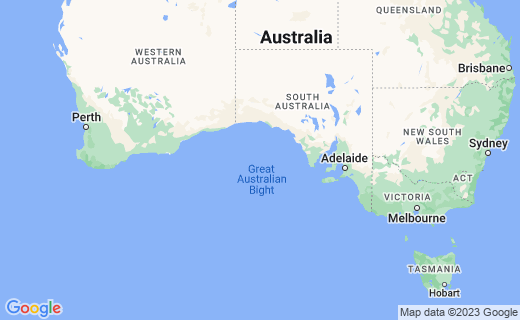 The Leafy Sea Dragon is equipped with long sharp spines that blend in as a part of their leafy appendages. These spines attach to the ends of their plate rings that cover their entire body, basically enclosing them in a protective spiny defense top and bottom. Their body's consist of many armored plates and ribbing for even more protection.

The Leafy Sea Dragon is the only animal that actually uses movement as a way of concealment. They do this by slowly 'drifting' along with the seaweed beds that they prefer to live in. Their leafy appendages also will change color depending on their surroundings to further confuse their enemies.

Their eyes move independently of each other allowing them to see in many directions at once which is another of their defensive tools they use to move slowly about their marine environment.

Divers have noted that a Leafy Sea Dragon will curl up in a ball when threatened exposing its many spines to its attacker. Because the Leafy Sea Dragon is relatively flat with a series of bony cartilage and appendages it does not make for a fat meal and many predators avoid them. Although this has not been observed in the wild many researchers believe that skates and sharks are their main enemies in the wild.

Of course man is their primary enemy as they are coveted for salt-water aquariums world wide and because of that have been put on a protection list with strong laws against their capture.

They both inhabit the Southern waters of Australia and are considered endangered. Weedy Sea Dragons are more often a reddish to blueish/purple in color with orange to yellow dots.

The Leafy prefers to live in 5 to 35 feet of water in kelp beds and marshy seaweed infested areas and avoids open water where their colorful appendages would make them stick out like a sore thumb. The fronds and kelp forests help to reduce strong currents and allow them to float slowly through their habitat in search of food.

The Leafy Sea Dragon only lives in the Southern waters of Australia from Perth in the West to Adelaide in the East.

The female of the species produce the eggs which are then inseminated when they are transferred to the male which then serves as a living hatchery during incubation. Much like the Sea Horse the male carries the eggs and has a series of tiny cup indentations along its tail designed to hold an individual egg until it hatches. It is believed that about 250 eggs can be carried at one time and that more than one female can use a male as a host.

What Have You Learned?