Since the first European settlers began to colonize the Americas, the American Indian has been a race that must traverse their livelihood between those of the Native way and those of the white way; consequently, it was and is only natural for the race of American Indians to mix with other races, such as the Anglos. This blending of two cultures allows for a third race, a mix of the two races, to take shape; however, even though it may appear that a person who is half Indian and half white would be able to mingle freely in both societies, this notion is false. A person who is of two races often finds it difficult to maintain personal identity and must be a sort of dual citizen in society. As a dual citizen, the person is often forced to negotiate between the Native ways and the white ways. Mourning Dove’s novel Cogewea underlines how these negotiations often led and continue to lead to a struggle in identity for many American Indians. The protagonist, Cogewea, is half Indian and half white. She grew up in both worlds as a child and, as an adult, she continues to confront her identity issues. Her conflict is the primary focus of Chapter VII: The “Ladies” and the “Squaw” Races. This chapter emphasizes Cogewea’s standing as a dual citizen and how she both successfully and unsuccessfully balances her life while living in two separate worlds.

Cogewea’s own personal identity and dual citizenship causes a problem at the races. At the end of the previous chapter, Cogewea declares her opinion on her racial identity by stating, “I’m part Injun and can participate in that as well as in the ladies race…I am going to pose as both for this day” (59). In this instance, and throughout the book, Cogewea personally identifies herself as both Indian and white. She does not consider herself more of one race than the other. However, the racers and the judges think otherwise. At the beginning of the chapter, Verona Webster says, “Why is this squaw permitted to ride? This is a ladies race!” (63). Despite personally identifying herself as white, others do not view Cogewea in the same light. In addition, later in the chapter, a judge also takes the same opinion as Verona Webster and states Cogewea did not win the ladies race. Although Cogewea does not share their opinion, her victory at the races is overshadowed by the lack of racial understanding on the part of the whites and the Indians. When Cogewea lines up for the squaw race, a fellow racer says, “You have no right to be here! You are half-white! This race is for Indians and not for breeds!” (66). The alienation Cogewea feels as a dual citizen is caused by both full blooded Indians and full blooded whites. This conflict in identity is not established in Cogewea herself but in the full blooded ethnicities around her. She is not accepted as part of either race because she is half Indian and half white. She is left in between the two. Ultimately, Cogewea’s dual citizenship deceives her and she decides to give the prize money back for both races; but before she leaves, Cogewea says, “I am as much Caucasian, I regret to admit, as American, and measured by you…ideals, a mere nobody; with no rights to be respected” (70). Cogewea still identifies herself as both Indian and white; however, she concedes that her dual citizenship accounts for little and she is considered less than both races.

The alienation Cogewea feels because of her dual citizenship is more a product of society than her own production. When Cogewea is away from society, at H-B Ranch, she is thought of as superior or equal to everyone at the ranch. Her identity as both Indian and white is never questioned and she is successfully able to negotiate both aspects of herself. As a fictional character, Cogewea represents a whole race of real mixed blood people who feel the same way. A person may be half white and half Asian, half African and half white, half German, a quarter Mexican, and a quarter Indian, etcetera, but they all share the identity of being a race of mixed blood and their struggles coping with their shared identities are very much the same. Since this race has to negotiate living in two different cultures, they are also dual citizens. Like Cogewea, a dual citizen must resolve the conflict of living as a person of two different ethnicities while also maintaining their own identity as belonging to both races. For the American Indian this conflict in identity remains intact today not only for Indians of mixed blood but also for full blooded Indians. Indians in general must take on the daunting task of living by traditional Indian ways while also trying to make a living in the white world; therefore, in many ways, all Indians are dual citizens. 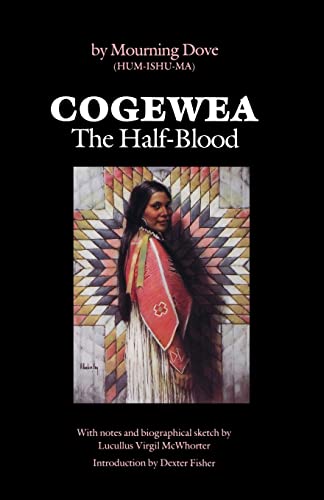 Cogewea, The Half Blood: A Depiction of the Great Montana Cattle Range
Buy Now