At about 9:00 AM EST in my city, the hilarious new animated William Shatner and Dreamworks/Weinstein Company feature film Escape From Planet Earth (PG) was released. It was produced largely in Canada, with a big-name voice cast.

Driving to the theater for a 10:00 AM showing, I learned from a radio broadcast about the Chelyabinsk Meteor event from the late night before (about 9:15 AM Friday, my time). I thought that the Asteroid 2012 DA14 Flyby predicted for February 15, 2013 had occurred early! When I heard later of the DA14 event in the afternoon, I suspected a flurry of conspiracy theories about Canada and asteroid control by sundown - or perhaps that Willliam Shatner does really own the universe.

I sympathised with the Siberian region affected by the meteor crash, learning from a well known asteroid mining company, Planetary Resources (Google, James Cameron, and others) , that it hit with the power of 1,000 times that of the Little Boy H bomb that demolished much of Hiroshima during WWII. However, NASA photos indicate that the meteor did not strike the gound, but burst into a meteror shower of smaller pieces.

Do these meteor event affect Earth's weather like sunspots do, or do they lead to extinctions? I agree with scientists who feel that some dinosaurs became smaller rather than dead - giant crocodiles (even the regular size), monitor lizards, Gila monsters, etc. -- even a dinosaur-like living species of bird was recently found and reported in National Geographic in January 2013. If ever a ptero-being ever actually did develop feathers, our current living species is it.

The Siberian rock did injure 1,400 people, however, although some reports quote 1,000 or even 500. Someone is trying to diminish the importance of this event, because I see that Russian-language papers are reporting over 1,000 injuries.

Intriguingly, Chelyabinsk has been the site of top secret nuclear research since WWII, with atleast one major nuclear accident during the Cold War. 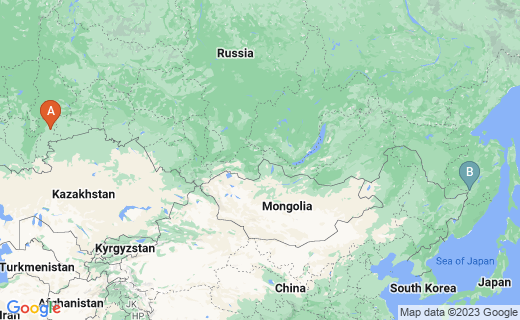 The estimated size of the object, prior to entering Earth's atmosphere, has been revised upward from 49 feet (15 meters) to 55 feet (17 meters), and its estimated mass has increased from 7,000 to 10,000 tons. Also, the estimate for energy released during the event has increased by 30 kilotons to nearly 500 kilotons of energy released. (http://www.nasa.gov/mission_pages/asteroids/news/asteroid20130215.html retreived February 15, 2013).

It was good that no reviews of the film were published before the release date of Escape, because those would have ruined the surprises. As I watched the film, I laughed at the dozens of references to Star Trek: The Original Series episodes and movies, Star Wars, Buzz Lightyear, Monsters, Inc. and many others. Then my mouth dropped opened at messages interwoven into the plot, much like those of The Triplets of Belleville, a delightful French animation in which even the Statue of Liberty is fat.

One jaw dropper is an interwoven message that the USA plans to steal the resources of every other planet and asteroid it can reach and then kill alien populations living on any of them. Reference is made to Planetary Resources asteroid mining company by mentioning the name of co-founder "James Cameron", cleverly separated as the names of two US Army soldiers and called out at once by a General that lost his dad in the 1947 Roswell Incident when a UFO lands on him in his back yard. This reference is lost on the audience kids, while the adults laugh. The kids have plenty to laugh at in the rest of the film and I hope they listen to the problems with overeating foods containing sugar and caffeine.

You must go and see the movie - in 3D - even if just to get a look at the gigantic bigger-than-IMAX Asteroid Gun the US has in its possession for mining alien fuel. Of course, it won't work without alien fuel in the first place.

US corporate greed and American obesity are brilliantly parodied throughout the film, funny and disturbing at once. One space hero wears corporate sponsorship patches all over his spacesuit. The colors in the animation are happy, bright primary colors, white, and black, with a few muted shades - not like the blaring colors of Disney TV shows for youth (those shows hurt my eyes).