The Princess And The Pea

The Princess And The Pea, A Fairytale by Hans Christian Andersen

The Princess and the Pea is a Danish fairytale first published in 1835. It was told and written by by Hans Christian Andersen. It has been extremely popular over the years, especially with girls, and has been adapted many times in books, movies, television shows, Broadway shows, cartoons, and more.

Once Upon A Mattress
Based on the acclaimed Broadway musical, an all-star cast brings a beloved fairy tale to life in Disney Presents ONCE UPON A MATTRESS. Queen Aggravain (Carol Burnett) sabotages the efforts of every young princess who hopes to marry her son, Prince Dauntless (Denis O'Hare) -- and no one else can settle down until he does! Honorable Sir Harry is determined to marry the lovely Lady Larken (Zooey Deschanel), so he sets off for faraway lands and returns with an unlikely candidate: Princess Winnifred from the swamps (Tracey Ullman). It's love at first sight for the Prince, so the Queen sets about planning her most difficult challenge yet. The palace is filled with merriment and mischief while everyone wonders, will Princess "Fred" pass the Queen's test?
Buy Now

ONCE upon a time there was a prince who wanted to marry a princess; but she would have to be a real princess. He traveled all over the world to find one, but nowhere could he get what he wanted. There were princesses enough, but it was difficult to find out whether they were real ones. There was always something about them that was not as it should be. So he came home again and was sad, for he would have liked very much to have a real princess.

One evening a terrible storm came on; there was thunder and lightning, and the rain poured down in torrents. Suddenly a knocking was heard at the city gate, and the old king went to open it.

It was a princess standing out there in front of the gate. But, good gracious! what a sight the rain and the wind had made her look. The water ran down from her hair and clothes; it ran down into the toes of her shoes and out again at the heels. And yet she said that she was a real princess ...

Princess and the Pea Books

The Princess and the Pea
Buy Now

The Princess and the Pea: A Fairy Tale (Little Pebbles)
Buy Now 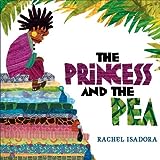 The Princess and the Pea
Buy Now

The Princess and the Pea (Part 2)

Well, we'll soon find that out," thought the old queen. But she said nothing, went into the bed-room, took all the bedding off the bedstead, and laid a pea on the bottom; then she took twenty mattresses and laid them on the pea, and then twenty eider-down beds on top of the mattresses.

On this the princess had to lie all night. In the morning she was asked how she had slept.

"Oh, very badly!" said she. "I have scarcely closed my eyes all night. Heaven only knows what was in the bed, but I was lying on something hard, so that I am black and blue all over my body. It's horrible!"

Now they knew that she was a real princess because she had felt the pea right through the twenty mattresses and the twenty eider-down beds.

Nobody but a real princess could be as sensitive as that.

So the prince took her for his wife, for now he knew that he had a real princess; and the pea was put in the museum, where it may still be seen, if no one has stolen it.

There, that is a true story.

Faerie Tale Theatre: The Princess and the Pea

In 1984, Shelley Duvall starred in a Princess and the Pea episode of Faerie Tale Theatre. Also, keep an eye out for Liza Minnelli.

Faerie Tale Theatre: The Princess and the Pea

In 1984, Shelley Duvall starred in a Princess and the Pea episode of Faerie Tale Theatre. Also, keep an eye out for Liza Minnelli.

The Very Smart Pea and the Princess-to-be
At last, the true story behind the Princess and the Pea! (Come on, did you really think a princess could feel a pea through 20 mattresses?) In this retelling of the classic fairy tale we're finally presented with the pea's-eye view. This fresh green perspective allows us to see that the tiny legume held lofty expectations from the early days in the pod. We also learn something we suspected all along--the whole thing went down a little differently than rumors held. (One can imagine a whole line of revisionist fairy tales recast from the eyes of crucial inanimates--the beanstalk, the glass slipper, the red riding hood.)
Buy Now

The Princess and the Pea & Other Stories
Buy Now

The Very Smart Pea and the Princess-to-be
Buy Now

The Princess and the Pea (Usborne Young Reading)
Buy Now

Princess and the Pea Gifts

Once Upon a Mattress - On Broadway

A performance from Once Upon a Mattress at the 51st Tony Awards featuring Sarah Jessica Parker.

Any additional thoughts on the Princess and the Pea?