Richard I, Good King Richard; Richard the Lionheart  of Robin Hood fame, What was his real story?

At the time of Henry II's death he had two living sons, Richard and John and a grandson called Arthur born after the death of his father Geoffrey.

The battle for the throne

Richard wanted to be heir to all his fathers dominions. Henry had wanted the land to be split between all his sons, the two that were alive and Geoffrey's posthumous son, Arthur. In order to make his claim more formidable Richard had formed an alliance with the King of France, Philip Augustus II and wanted all his fathers territories. His brother John, who had been his fathers favourite moved to Ireland, away from his brother and Henry's grandson was given Brittany.

Richard was aware of just how much of Europe he controlled and kept away from England as much as possible preferring the more comfortable climate in Anjou. Richard was aware of his responsibilities to his various dominions, When he heard that Jerusalem had been sacked by Saladin he raised an army and with King Philip Augustus II of France set out on the third crusade. He took his army and fleet to the extremes of the Mediterranean solving problems with supply and transport of men , larger than any european king had ever faced before. He negotiated the Treaty of Jaffa in 1192 which enabled Jerusalem to survive for another 100 years.

Richard planned to be home in 1191 and if he had made it home he may have avoided the problems which he did encounter upon his return. Richard was captured and held prisoner by the Germans between December 1192 and February 1194. In England John revolted and tried to take power, probably in the anticipation that his brother would not be released. It is evidence of the strong government in England that Richards' agents were able to control John.

Despite having gone off to war with Richard, King Philip Augustus II saw Richard's imprisonment as an opportunity for territorial gains and he captured Vexin and was barely stopped by Richard's forces at Rouen. 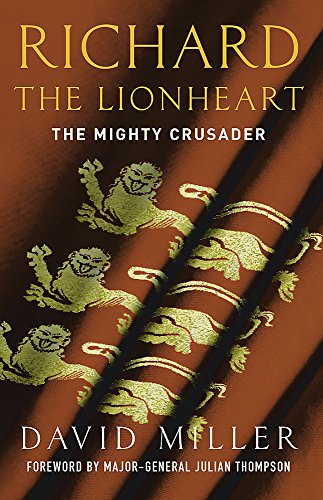 Richard The Lionheart: The Mighty Crusader
In a biography as compelling and controversial as its subject, Richard I of England, comes bursting to vivid life
Buy Now

Richard was released in February 1194 after payment of a large ransom. He made a quick visit to England during March to May 1194 and then returned to Europe to regain the territory lost whilst he was in prison. By the end of 1198 he had just about succeeded but never lived to enjoy the fruits of his labour as he died in April 1199 following a wound suffered at the siege of Chalus- Chabrol near Limoges.

Depending on which versions of the Robin Hood story you have seen or read you are either disappointed or saying "I knew that". Me, I'm disappointed I grew up with Richard the Lion Heart, King of England- what a shock to find he wasn't here much. A further shock was that England was poor not because of greedy King John but because the war and the Kings ransom had drained the countries treasury.

Other hubs in the series