The Assassination of King Alexander 1 of Yugoslavia

Alexander1 suceeded his father, Peter 1 on 16th August 1928 as King of Serbia, Croatia and Slovenia.

The late 1920s were a tempestuous time. On 8th August 1928 the Serbian leader Stjepan Radic died in an assassination attempt in parliament. He died of a shot in his stomach some time after. As a result of this attempt Alexander changed the name of the country to Yugoslavia and on 6th January 1929 prorogued parliament and pronounced himself dictator of the newly named country. He immediately outlawed the cyrillic alphabet and tried to introduce the use of the Roman alphabet. In 1931 he introduced political reforms. He allowed universal male suffrage but ensured that voting was done in public by abandoning secret ballots and using extreme pressure on even minor government officials to ensure that their votes were cast as he wished. Alexander ensured that his wishes would be passed by appointing over half of the upper house of assembly himself so that they would vote in accordance with his wishes. He also changed the law so that a law could be passed by one house only, therefore Alexander had his dictatorship

The Croatians were unhappy with King Alexander's proposals and made plans to assassinate him with the aid of Benito Mussolini, the Italian fascist dictator.

In 1934 the King travelled to France in a bid to form an alliance. The french government dispatched the foreign minister Louis Barthou, General Alfonse Georges and Admiral Berthelot to meet the king. They were travelling through Marseilles when Vlada Chernozamsky jumped out of the crowd onto the running board of the car and shot at the men. His first target was the King. He fired two shots at him at point blank range and he died immediately. His second target was a chauffeur who also died. At the time of the incident it was believed that he was responsible for the death of Barthou who died one hour after the attack.Research undertaken many years after the event indicated that Barthou was killed by accident by a french policeman. The general and Admiral escaped unscathed. A policeman armed with a sword cut the attacker down and as he fell of the car he was attacked by the crowd but not before he was shot in the head by a policeman. By the time the police cleared the crowd away, Chernozamsky was dead.

For the first time an assassination had been caught on film as newsreel cameras had been filming the progress of the King through France. The body of the chauffeur had become wedged against the brake of the car which gave the newsreel men ample opportunity to gain the footage

Chemozamsky, although a Bulgarian, was a member of the Internal Macedonian Revolutionary Organisation (IMRO). The IMROP were fighting for the secession of Macedonia from Yugoslavia.

Alexander was buried in the Memorial church of St George which his father had beneficed. He was succeeded by his cousin Pavel as his son was a minor. Peter who became Peter III died in exile in 1970 of cirrhosis of the liver. He was the third and last King of Yugoslavia. 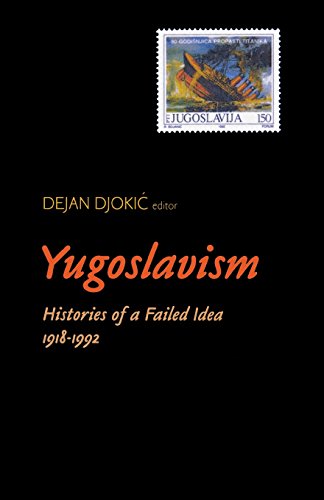 Yugoslavism: Histories Of A Failed Idea, 1918-1992
This volume explores historical, political, social, diplomatic, and economic aspects of the Yugoslav idea-"Yugoslavism"-between the creation of the nation in 1918 and its dissolution in the early 1990s.
Buy Now