I enjoyed the privilege of teaching American History for many years in high school, GED, after-school enrichment, ESOL and adult education settings.

Students and I sought out as much unvarnished information as is available from local universities, related research projects, and descendants of Civil War soldiers, Local Native American groups, and African slaves. Information also came from the many Ohio museum curators involved in historical research for The War Between the States and from historians at Columbus, Ohio's Martin Luther King Jr. historical theater complex. We learned many true stories of the Underground Railroad from curators of the houses we have on the historic route from the Ohio River to

Our classes enjoyed speakers from Columbus who had had ancestors who escaped slavery or who had helped former slaves through the workings of the Underground Railroad in Ohio. Some were African Americans whose ancestors had joined Native North American nations in Ohio or Canada, or had become black cowboys.

There are over 800 documented Underground Railroad sites and 3,000 miles of escape routes found in the State of Ohio.

During the American Civil War and its related hunts for runaway slaves, someone is reported by legend to have said that the runaways disappeared as if on some underground railroad.

Trains had become an important mode of transport by those days and the reference fit. Vital human links in the chain of pathways and hideaways were called conductors and station masters.

The most well-known participants have become famous and intriguing parts of African American History during the month of February that honors the ethnic group in America, but also around the year and even in other countries. Canada was the end point for many runaways and the beginning of a new life for many ex-slaves. However, the Underground Railroad is known as far away as Tibet. 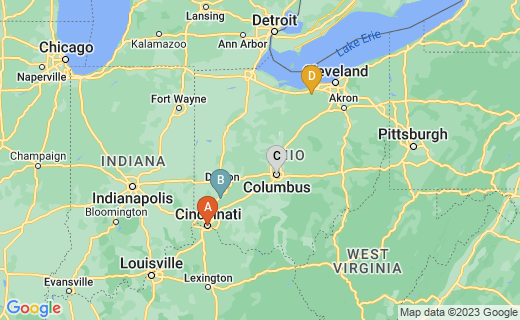 Oberlin was called "The Town That Started the Civil War" because no runaway slave that made it this far was ever returned to the plantation.

At least eight cities, including Ashtabula, Painesville, Cleveland, Sandusky, Toledo, Huron, Lorain, and Conneaut, along Lake Erie served as starting points to transport the fugitives from slavery to freedom in Canada.

The Secret Railroad of Ohio

A look at the map above shows how many routes along the Underground Railroad crossed through Ohio. The network is most concentrated in the state.

Ohio was an important crossover point for ex-slaves escaping bondage during the American Civil War, since the town sat on the shores of the Ohio River. Rushing water separated North form South and made a buffer and a safety margin for liberty.

Homes operating on the Underground Railroad are found today on guided tours in Downtown Columbus, Westerville, and throughout Cincinnati and other Ohio communities. Middle school enrichment activities involves programs that take youth to homes on the Underground Railroad, assign each one a part as a runaway slave, conductor, station master, slave owner, etc. over a three-day weekend.

Cincinnati leaders are pleased to offer a home to the National Underground Railroad Center, 50 E. Freedom Way in Downtown Cincinnati on the Ohio River, 45202.

Freedom Center on the Ohio River 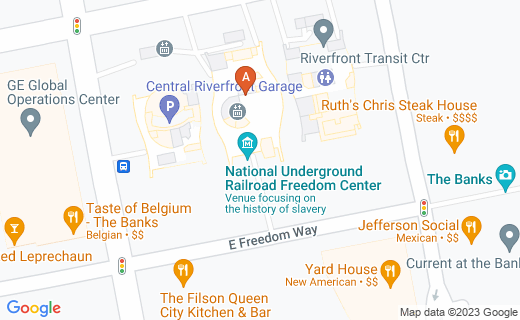 I mentioned Tibet because His Holiness, the 14th Dalai Lama, has been honored with the center's International Freedom Conductor Award for 2010 and has been scheduled to receive on on October 20th in Cincinnati. he receives this distinction in recognition of his tireless life-long efforts to free Tibet from Chinese rule and on behalf of human rights around the world.

From her teen years until her passing at 98, Ms. Height ignored the prejudice against her for being African-American and female and worked for equality for all people. We say that many people make a life's work of something, but Dorothy Height actually did so, without a single detour.

The first two groups I mentioned above out-casted her for bring female and African-American, respectively, but she pressed on with elegance to find a way where there was no way. She did it for at least 80 years, from the seed-time of the Civil Rights Movement back in the 1930s, until April 2010.

Ms. Height was a strong and effective leader in the Civil Rights Movement that took over the 1960s and the Kennedy and Johnson presidencies. As a child, I never heard of her. Her work was held in the background, but she continued to do it.

She directed the National Council of Negro Women for 40 years beginning in 1957 and continued serving that organization after her retirement from the post. She never stopped. She began her work by participating in anti-lynching protests and voter registrations at a teen and then as a social worker, became an executive of the YWCA and a founder of its Center for Racial Justice, welcoming its racial intergation in the 1940s. She aided the beginnings of the National Women’s Political Caucus in 1971.

Dorothy Height may have been the first person to understand that maltreatment of all minorities comprise a single Holocaust - Blacks, women, Native Americans, Jews, Asians, whites in the minority among some larger groups; numerous genocides and other targets. All of them. All are part of one larger tragedy. Ms. Height brought together people and organizations to combat the forces aligned against African-American and women's rights and that was a start. The Underground Railroad and other organizations seek to combat all inequality and this mission shows in the people whom they have selected as International Conductors.

Ms. Height worked at the New York City Welfare Department in the 1930s and she exposed the exploitation of black female domestic day- laborers. They gathered on street corners called “slave markets” and were hired for 15 cents an hour by white housewives driving by, looking for cheap maid services. In comparison, an aunt of mine during these same years - also named Dorothy - was hired at 75 cents an hour as an entry-level office clerk.

Besides giving her entire life to Civil Rights, Ms. Height in 1963 was on the platform when Dr. Martin Luther King Jr. proclaimed, I Have a Dream for the famous March on Washington crowds and when the other men spoke. However, she was one of the lead organizers of the March and already a recognized speaker. She had won a college scholarship from an all-white panel, based on her speeches about the Reconstruction Amendments to the Constitution: 13, 14, and 15. The only woman to work on such major national projects, she was not given a chance to speak a word. She did not complain. What she would have said, she wrote in her 2003 book Open Wide the Freedom Gates.

Prejudices blocked Ms. Height's path several times, but she ignored them and went around. Ms. Height received the Presidential Medal of Freedom in 1994 and the Congressional Gold Medal in 2004, among many other honors and awards that brought light to her work. She received three dozen honorary PhDs. Finally, she received honors during the 2009 Presidential Inauguration of Barack Obama.