Why is Black History Important?

Black History is American history and recognized as important long before many imagined it was accepted.

First recognized as an event in 1915, Black History Month was celebrated at the 50th Anniversary of the Emancipation Proclamation.

In 2012, we are just three years short of the Sesquicentennial of the proclamation that freed black slaves in America. The celebration grew into a month-long event that has continued to develop and gather events and opinions of all kinds.

Each year the study of African American histories becomes more interesting as the National Geographic, Smithsonian, and IBM Genographic Project indicate increasingly more closely that all races are related by DNA.This has also been demonstrated in TV shows like Who Do You Think You Are?

There are some ethnic genetic differences that look huge to us, but on the larger genetic scale, the percentages of differences are remotely tiny.

Broadcasts from National Geographic specialize in the surprises that genealogical seekers experience when they find their ancestors and current relatives they knew nothing about. I've been surprised and so have thousands of others, making a knowledge of ethnic histories necessary to the understanding of each of our backgrounds. 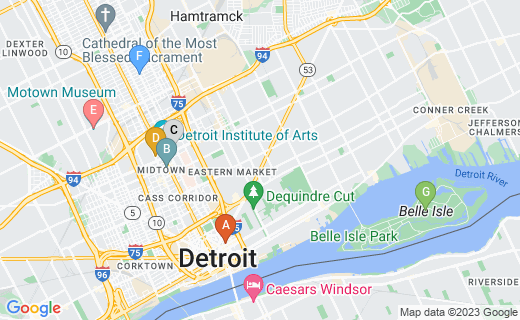 This is likely the last stop on the Underground Railroad before hurrying across the Detroit River by night.

Last Stop on the Underground Railroad

One of my favorite US cities for historic installations and other attractions, Detroit is packed with interesting Black History. Several churches in town are historic stops on the Underground Railroad and some maintain museums in honor of that heritage.

Detroit was the last stop before Canada, namely Windsor ON, across the Detroit River. Underground Railroad installations are popular in the Province of Ontario as well. A popular tour takes visitors through Detroit and Windsor, then on to the North American Underground Railroad Museum in Ontario.

All of the above attractions are pinned on the map offered below. While 1st Congregational Church of Detroit (map point A) may have been the very last stop on the Underground Railroad before Windsor, Ontario, Canada; I wonder if escapees and their conductors and guides ever used Belle Isle to the east as cover.

A SAG producer, director, and actor, Sean H. Robertson is reviving Michigan's film industry after state tax incentives were cancelled in 2011. Operating 313Wood: The New Detroit, he has already garnered success and recognition for African-American and other artists in a wide range of venues.

One of Sean's latest adventures is his Internet-based film called Great Lake State. He is also working on filming his novel trilogy based on his Cries of Vampyra.

The first Black cowboy is through to be a man born the same year as my grandfather, in 1970.

His name was William Pickett, held up as a legend for his roping, riding, and shooting skills. He was African American and Native American.

It is thought that, on some Texas trails, about a quarter of cowboys were Black.

Black Cowboys in the American West

Black Cowboys of the Old West: True, Sensational, And Little-Known Stories From History, First Edition
Some voices maintain that there are "no such thing as Black cowboys", but they are incorrect. My ancestors in the 1800s on their way to California saw the Black Cowboys, as this book describes real life individual. These cowboys of color are exactly real and this book is valuable in testifying to their existence. It has a favorite place in my own library.
Buy Now

Politics and War - Black America Is There