With or Without Universal Healthcare

Michael Moore is a critically acclaimed documentary film maker. Most Americans remember Moore’s first major break when he made the documentary Bowling for Columbine, about the gruesome attack two teenagers made against their high school. Critics remember Moore for winning an Academy Award for this world renowned documentary. Following his award winning documentary, Moore made Fahrenheit 9/11. “It took in $119 million in North America and another $103 million abroad, making it the largest-grossing documentary ever” (Breznican P.1a). Sicko became Moore’s next big hit, winning another nomination of an Academy Award. Although Moore is an award winning filmmaker, there are other reasons that prove how credible Moore is as a documentary filmmaker. When Moore began researching the health care system of the United States he fell upon a common faux pas of U.S. health care; Denial of covering a person’s ailments for any number of reasons. An excellent example of how widely known Michael Moore’s achievements are is the Noe family, presented in the beginning of Sicko. When Doug Noe heard of Moore’s research he emailed Moore to inform him of their families struggles with their insurance company, Cigna. In short, Cigna was denying their one year old child coverage of a second cochlear implant, stating that it was experimental to have two cochlear implants. The family followed this rejection with a letter to the company stating that Moore was creating a new documentary about health care, and they were already giving him information about their disagreements. Within weeks they had a message on the answering machine explaining that the case had been reviewed, and their daughter was approved for her second cochlear implant. This speaks volumes to Moore’s credibility. Just the mention of his name and documentary in the same sentence was enough to reconsider health care coverage.

Moore continues to engage audiences through other health insurance stories similar to the Noe family’s struggle. Every story Moore chose to share with his audience is emotional. Moore uses his audience’s emotions to try to persuade them to stand up and do something about the health care crisis in the U.S. What types of people are in this audience? It is simple. Moore’s audiences range in age from educated to uneducated, but the target audience is the younger audience. Moore is trying to show the young citizens of the country the errors the government is making. In other words, Moore is trying to educate students about the misgivings of the U.S. health care system. Another audience Moore is trying to initiate is the lower middle class. Many of the families in the movie Sicko are included in this class. The lower middle class of America is extremely family focused. All of the families in the film are the same way. For example, Rick is faced with choosing which finger to reattach, ring or middle, because he couldn’t afford both of them. He chose his ring finger because he has always been a romantic. Many citizens within the lower middle class work hard for their money and are romantics. This story appeals directly to this audience.

Another unique way Moore entrances his audiences is through compare and contrast. Moore visits Canada, Britain, and France to meet with their citizens. He generates stories from interviews with these citizens. “None of those stories are inconsistent with this defensible claim: medical care in the rest of the industrial democracies is for all practical purposes free of the fear of financial disaster. And that is the important point” (Marmor, Okma, Rojas P.49-50). This is a point within the documentary in which Moore successfully achieves by demonstrating how citizens of other countries have an easier time. Citizens of other countries are less stressed out because they do not worry about medical bills, but Americans do. Although the comparison to other countries’ national health care plans effectively enhances the emotions of the audience, Moore tends to drift away from the real topic at hand. At this point in the documentary, Moore goes off on a tangent about babysitters and laundry maids supported by other countries’ governments. He continues on about this, and even ends the film walking up the steps of the U.S. capitol building to ask the government to do his laundry. Throughout the film the emotions and points are easily convincing, but Moore could have dropped his obsession with laundry to keep with his health care topic. Many citizens will be happy with lobbying for the free health care and no looming financial burdens over getting the government to do their laundry.

Moore’s portrayal of the health care in the U.S. is very one sided. There are many flaws with the health care system, but an effective argument always displays both sides. Moore intrigues his audiences through emotions, even going as far as to use an extremely effective soundtrack. Simply playing off people’s emotions isn’t going to be enough to convince the country to use universal health care. “According to an MSN-Zogby poll, for example, two-thirds of Democrats plan to see the film, compared to just four percent of Republicans and thirty-one percent of Independents” (Marmor, Okma, Rojas P. 50). Moore might have been more successful in drawing in attention of all political parties if he had covered all sides of the debate. Moore attacks the health care system, but doesn’t actually explain what a universal health care system includes. If Moore spent more time explaining the idea of universal health care, then maybe people would be more inclined to do something. Moore successfully makes a very strong impression on the citizens of the United States, especially when he used the stats showing how much money it took the health insurance companies to pay off the senators. In the end, Moore makes a lasting impression. His last few sentences of Sicko can help motivate thousands to support universal health care,

“When we see a good idea from another country, we grab it. If they build a better car, we drive it. If they make a better wine, we drink it. So if they come up with a better way to treat their sick, to teach their kids, to take care of their babies, to simply be good to each other, then what’s our problem? Why can’t we do that? They live in a world of WE not ME. We’ll never fix anything until we get that one basic thing right.” (Moore) 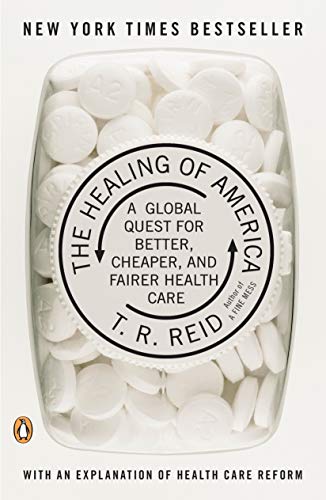 The Healing of America: A Global Quest for Better, Cheaper, and Fairer Health Care
Buy Now