Who was the real historical figure who inspired Bram Stoker's Dracula? Read on to find out ...

Who was Vlad Dracula?

Vlad III the Impaler is believed to have inspired Bram Stoker to call his famous vampire villain 'Dracula'. His surname was Draculae - and there are two theories as to the meaning of this second name.

The first (and most likely) is that is comes from his father Vlad II who was titled Vlad Dracul because he was a member of the chivalric Order of the Dragon - Societas Draconistrarum in Latin.

The second theory is that the name 'Draculae' came from the Romanian word for 'devil' and meant 'son of the devil'. While this possible meaning may have caught Bram Stoker's attention, it is less likely because in Romania Vlad III the Impaler was seen as a hero - it is in Western Europe that he was vilified.

Vlad III Dracula got the nickname 'the Impaler' because of his preferred method of capital punishment - impaling offenders on a wooden stake and leaving them to die slowly and painfully, sometimes over a number of days. This practice was condemned in a number of pamphlets published in western Europe by political and religious leaders. But western Europe was no stranger to torture as a means of law enforcement so why where they so quick to speak out about Vlad Dracula?

The reason is the same reason that Vlad III is seen as more of a national hero in Romania: he was successful against the Turks. In the 15th century the Ottoman Turks established an empire based in the country known as Turkey today, and began to extend their political and military power into Eastern Europe. They had many military successes and their march of conquest seemed to be unstoppable - at one point Vienna in Austria was under siege. Vlad III was one of few rulers in the region who managed to defeat the Turks and repel them from his lands, but he didn't receive much help from Western leaders. Hence they wanted to make Vlad look bad - because he had made them look bad for not helping a fellow-Christian ruler.

Was Vlad Dracula a vampire?

While Vlad Dracula was a fairly ruthless ruler, his methods weren't much more cruel than many leaders in Europe at the time - in the Middle Ages the public death of convicted criminals, traitors and the king's enemies was considered a kind of street entertainment. Impaling victims was not necessarily any worse than disembowelling, quartering or any of the other techniques common in Western Europe.What was shocking with Vlad Dracula is the alledged numbers of people he had put to death.

There is no record of Vlad Dracula engaging in any kind of supernatural behaviour. In Romania he is remembered as something of a national hero - there are no legends about magical abilities or over-coming death. It seems that the name 'Dracula' only became synonymous with vampires when Bram Stoker published his 1897 novel of the same name. He was researching vampire myths of Eastern Europe when he came across the name Vlad Dracula in a history book. This seems to have been the motivation to name his central character - simply because with its roots in the Latin word for dragon, Dracula does make a villainous sounding name. If you don't like dragons, anyway!

If you are interested to know more about the inspiration behind Bram Stoker's Count Dracula, click on the titles to read these articles:

Bran's Castle in Transylvannia is often presented as 'Dracula's castle' but it is not clear on what evidence this claim is based. It is only loosely connected with Vlad III 'the Impaler' and there is no evidence Bram Stoker knew of its existence, never mind that it inspired his writing of Dracula.

One castle with a much closer connection to Vlad Tepes is Poenari Castle in Wallachia. it is not as pretty as Bran Castle, mainly because is was indeed one of Vlad Dracula's principal fortifications in the fight against the Ottoman Turks. It's impregnable position made it invaluable for defense of the surrounding countryside.

The castle was errected at the start of the 13th century by the rulers of Wallachia, and only fell into disuse and disrepair in the 17th century. Today the exterior walls have been repaired and the castle can be visited. But be warned - there are over 1,000 steps to climb to reach this towering fortress. 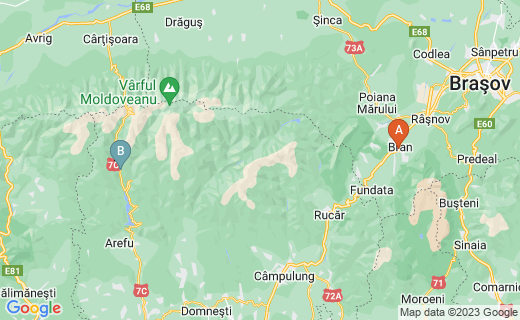 One of Vlad the Impaler's most important fortifications.

One of Vlad the Impaler's most important fortifications.