What was the Regency Era?

The Regency Period in the United Kingdom

It's a period of time beloved of romantic novelists and hotel owners but what was the Regency era? Just when and why did it happen? If you've read a Jane Austen novel or watched a screen adaptation of one of her works, you'll have a pretty good idea of what the Regency period may have looked like: men in tight trousers and long boots squiring ladies in high-waisted gowns to balls in Bath. What you may have missed is the broader picture of what was happening the Britain at the time. Here's an overview of Britain's Regency period.

The Royal Pavilion at Brighton

The Time Period of the Regency

Between the restored Stuart monarchy and the Victorian era sat the Georgian monarchs. The Regency happened during the reign of George III and, strictly speaking, lasted for the final nine years of the King's life (1811 - 1820). However, the Regency is often regarded as more than the shift of power from the King to the Prince Regent and there is a view that the Regency era in art and literature lasted longer than the formal political regency. Taking this broader view, the Regency Era can be said to last from around 1790 to 1837.

The Formal Cause of the Regency

George III was one of Britain's longest serving monarchs, but sadly his reign was marred by mental illness. The King had suffered at least two bouts of insanity before the Regency. After a particularly bad period in the late 1780s, a Regency Bill was drawn up in 1789, but the King recovered his wits and the Bill was withdrawn before it passed through Parliament.

The King endured more short bouts of illness until he finally lost his health permanently in 1810 when his youngest and favourite daughter, Princess Amelia, died at the age of 27. George would weep and wail for his lost daughter, then at other times delude himself that she was an immortal, living in Hanover with a family of her own.

When it became clear that the King would not recover, an Act was passed naming the Prince of Wales as Regent for his father. The Regency began on 5 February 1811.

George Augustus Frederick was the eldest son of King George III and his wife Queen Charlotte. He was born on 12 August 1762. The young Prince of Wales had several good qualities, including an aptitude for languages. As he grew older he developed into a fine conversationalist and had a keen eye for design. Sadly, he also had a taste for over-indulgence that extended into all aspects of his life; he had a great many mistresses, ran up huge debts in funding his lavish lifestyle and grew obese.

George III was essentially a simple man, known as "Farmer George" to his subjects. Unusually for a King, he appears to have enjoyed a happy and loving marriage with his Queen. There were no mistresses for George III and he spent most of his life in and around London, surrounded by his family. He was not impressed by the profligacy of his son and refused to bail the Prince of Wales out of debt (not unreasonable since between Parliament and the King, he had an annual income which would amount to around £10 million today). The contrast between father and son could not have been more marked.

George III did finally relent and offer to help his son out of debt (he eventually amassed an outrageous debt that would today amount to around £48 million) but on the condition that he married a cousin, Princess Caroline of Brunswick. The King and Queen no doubt imagined that marriage would help the Prince to settle down; in the event, it was a disaster. The couple detested each other and the Prince only got through the ceremony with a combination of Dutch courage and remonstrations from his father. He spent the wedding night drunk on the floor of his new wife's bedroom. By the time he became Regent, the couple were living apart and the King had custody of their daughter. 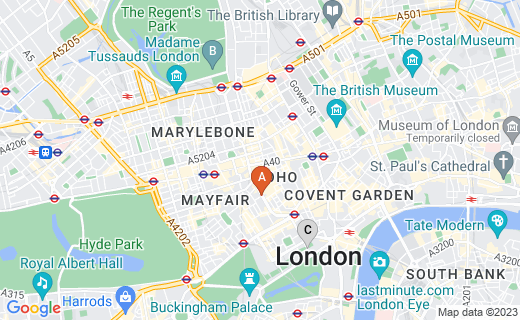 Prince Regent, Patron of the Arts

Although the Prince Regent was an adulterous, politically meddlesome drunk, he was also a lover of the arts. According to his friend Beau Brummell, the Prince loved music and "played the cello better than any prince in Europe". Of course, more than music, he loved fashion, hence his patronage of Brummell. The Prince indulged his vanity by ordering costumes of all sorts and having himself painted in various guises, from Field Marshall to Hussar. Whether he followed Brummell's habit of cleaning his boots only with champagne is unknown!

George was keen to leave his mark for posterity and set about building. Regent's Park and Regent's Street were part of a scheme devised by the Regent and John Nash. Regent Street runs from Carlton House, the Prince Regent's London home through central London up to Regent's Park. Originally the Prince envisaged a new palace for himself in the Park, but this was dropped.

The Prince's residence at Carlton House was more than a house, it was just about a palace. However, once George became King he wanted something grander. He had Carlton House demolished in 1825 and a terrace of houses was built instead. The money from the leases of the houses was put towards building Buckingham Palace.

The Poor in the Regency

Whilst the aristocracy were living in a rarefied world, beneath them was a seething mass of poor. London was full of "rookeries" or slums, consisting of poorly built houses, crammed together and between which there were narrow slime-filled alleys frequented by thieves and thugs. In the rookeries men and women didn't drink for pleasure, as the Prince Regent did; they drank to forget their misery.

In popular culture, one of the writers most identified with the Regency is Jane Austen. Her novels provide a window into Regency society and allow us to visit the great and the good of the time. Other notable writers and poets include:

From Regency to Victorian

The End of the Regency

George's regency ended on 29 January 1820 when his father died and he ascended the throne. He was 57 years old, obese and ruined by drink and possibly laundanum. He had his wife barred from his coronation.

Due to ill health, George IV was often incapacitated and, like his father, spent a good deal of time secluded at Windsor Castle. His reign lasted 10 years. His only child, Princess Charlotte, had died in childbirth in 1817, so the throne passed to his brother William IV. The excesses of the Regency slipped away and, particularly once Queen Victoria ascended the throne, a far more sedate era followed.