How And When Does Bread Become Toast?

At what point does bread become toast?

We all know we put a piece of bread into a toaster or under a griller, push down the lever or press the magic button and hey presto toast appears a few minutes later. However do we really know at which point during this process, toast is actually made?

Interesting and thought provoking question no doubt that may or may not actually have a definitive answer. Let's see if we can work out just when the humble slice of bread becomes a piece of crunchy toast.

Let's start with the toaster. I am sure we all agree that bread goes into a toaster. What happens next is almost a mystery. Perhaps if we look closer at the toaster, we may be able to find the answer.

There are many types of toasters on the market.

Some cater for two slices of bread, some for four. Some toast on both sides at once whilst others only one side at a time. There are flat plates, grillers and even ovens.

All which turn bread into toast. But when? 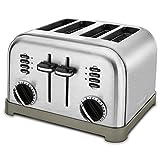 The earliest toasters were manual. Here bread is positioned within a hinged folding rack and placed against a heating element. After the desired 'color' is achieved, the rack is turned around and the other side is 'toasted'. In these versions, there were typically no dials, and no switches to get the desired outcome; it was all up to the user to determine when to take their 'toast' out.

The invention of the electric toaster brought with it a musical signal, or bell which sounded out when the pre-set conditions were met. Some use a thermostatic switch in which it automatically ends the toasting period when the surface temperature of the bread reaches a maximum level.

Some toasters pop up, some don't. Some toasters have glass see-through sides to allow you to watch it cook, others don't. Some have a feed-system where you place a piece of bread on one side and it rotates on a conveyor belt like system, coming out on the other side cooked and brown.

The modern toaster can take any or all of these forms, and you can find products that have a pop up function, a dial to set brownness, a heating element with a thermostatic switch inbuilt and even a timer to control the entire process.

Whether you push down a leaver, press a button or close a hinged door, the question still remains, when does bread become toast?

Maybe Laura Hadland knows the answer. After all she holds the world record for the largest toast mosaic.

Using over 600 loaves of bread and 9 toasters, she created art.

Possibly the ultimate art, turning a photo of her mother-in-law into toast, effectively with almost 10,000 slices of browned bread of varying degrees.

Measuring 32 x 42 feet, this took 6 hours and 40 pairs of hands to create an original birthday card and beat the previous record which was a mere 29 x 42 feet.

The desired piece of toast can differ significantly so maybe the ultimate answer will have as many varied responses. Maybe we need to concede defeat and agree that bread becomes toast at different times, based on different conditions which can vary based on the toaster operator and the toaster itself. No two toasters make the same toast. No two toaster operators can make same toast every single time.

Given this, it could be said then that bread becomes toast when:

Bread becomes toast as some point between when it is placed into a toaster and comes out cooked. As toast.

Maybe it is a three step process.

Toast Is Hot - Use Toast Tongs to Protect Your Fingers. Ouch! 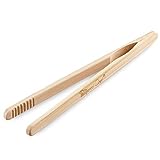 Scientists have discovered a math equation for toast perfection.

Can you believe it!

British food researchers at the University of Leeds discovered what they believe is the true way to make ideal toast. All based on mathematics.

It took three months, over 2,000 slices of bread and $15,000. I wonder if it was worth the effort. According to a poll of 2,000 people, the winning formula provides the perfect balance of external crunch to the toast and internal softness.

Question: When does bread become toast?

To achieve this you need a 'typical 900-watt' toaster with a dial set to 'five out of six' to achieve a temperature of 154 degrees Celsius.

Further studies suggest that the ultimate piece of toast is achieved when additional conditions are met:

If you are looking for the ultimate toast made into the ultimate snack without any mess consider using a reusable toastabag. Place your 'bread sandwich' into the bag and slot it into the toaster and it will toast your sandwich to perfection. Apparently. They are also great to use to heat up pizza slices and more.

How do you cut your toast?

When does bread become toast?

Well we know know the answer to this question. It is all based on maths. Who'd have thought.

Regardless though, everyone will have their own take on the perfect slice of toast. Whether you prefer frozen bread, perfectly fresh or day old bread, white, multi-grain, wholegrain, rye or gluten free. The choice is yours and yours only.

Maybe you cannot create the ultimate piece of toast without your favourite jam, marmalade or spread. Maybe it needs to be cut a specific way. Triangles, squares or not at all.

What ever your preference, the answer is now known so you can relax enjoy your toast today, in any tone or shade you like.

All Hubs are Original Material by 'Work At Home Mums' ©