Forty Miles A Year Is Gradual ?

World Wide Flooding due to the Polar Shift.

In an effort not to agitate you with my insipid belief's, I will present this topic as a question. Is the World Wide Flooding we are experiencing due to heavy rains and changing weather or a direct result of a Polar Shift, you make the call?

I recently came across a site called Zeta Talk that offers some interesting if not frightening predictions and backs them up with concepts that many of us have already reached on our own. They also back up their claims with predictions of which many are coming true today, but are not of the scale that have been anticipated.

In Allen W. Eckert's 1976 fictional book The HAB Theory he outlines the Polar Shift theory. Often fictional books are written simple to introduce theories and concepts, that the masses are perceived, not to be ready for, and to avoid creating controversy and 'scientific scrutiny.'

War of the Worlds by H.G. Wells is a perfect example, however the supposed reaction of the public to the radio show of the same name in 1936 was widely misrepresented in an effort to create panic, as was the format. I just can't picture folks committing suicide and fleeing to the hills cause of some radio show, it would take a little more persuading than that to cause a public that basically cares only about themselves to give up all they have, just because they heard on the radio the Martians were invading.

Wouldn't you first have to believe that Martians actually existed? The whole concept is absurd, but not without precedent, as the Flat Earth concept and Darwinism clearly demonstrates.

Again I ask you who says the world is not ready for the truth? The Media? The President? Mom?

Just recently (last couple of years) airports in Florida and airline pilots world wide have had to readjust their instruments and markings on runways due to . . . yes you guessed it Polar Shift, and yet the public didn't bat an eye at this 'news', what gives.

"The Federal Aviation Administration required the runway designation change to account for what a National Geographic News report described as a gradual shift of the Earth’s magnetic pole at nearly 40 miles a year toward Russia because of magnetic changes in the core of the planet," the Florida newspaper’s website also said.

Does anyone else think that FORTY miles a year is gradual?

To quote a fictional character seems a little inane, but appropriate.

"We have become a race of technologically advanced imbeciles living in a world we don't understand and don't have any real desire to know anything more about than what affects us directly and individually."

Almost every human on this planet has experienced some form of flooding at some point in their lives and so this concept is readily accepted. However, despite numerous archeological data supporting World Wide Flooding and Polar Shift, not many people have experienced or even heard of the concept, let alone believe it is possible. Contempt prior to investigation, is a concept most of us eagerly accept and practice, the power of deriding another's belief is a common practice of those of us unwilling to take the blinders off.

After all why use critical thinking to arrive at your own truth when you can sit in front of a TV and have someone do your thinking for you?

The overwhelming amount of 'evidence' seems to point to flooding because of the Polar Shift and yet their has been no official announcement, to my knowledge, to this effect. Of course the ones most affected by important news are usually the last ones to find out, as anyone whom has survived a natural cataclysm can tell you.

I survived the Nashville flood of 2010 only because I lived on a hill and probable would have slept through the whole thing if my neighbor (downhill) from me hadn't woke me up looking to park his cars in my driveway. It has rained just as hard numerous times since I lived there with no flooding so why would it flood now. I went on the internet to find my answer and just before the power went out, I visited a USGS site that admitted to releasing water from dams upstream due to them reaching critical levels. Of course if they had begun releasing water when the storm started (as they have done in the past) would we have had the resulting flood, hard to say, but seems unlikely!

I believe this is due to the way we think, and until we change our thinking process, we may remain in denial. We as a society often look for the cure instead of the cause.

Even if you don't believe anything I have said in this article, by all means do your own research, when I googled the subject I got over 7 MILLION links . . . so perhaps there is something to World Flooding due to the Polar Shift.

World Wide Flooding and Polar Shift is a fact many of us are simple unwilling to accept, due to a lack of critical thinking and a willingness to accept what the corporate owned mass media tell us is the truth.

Is 40 Miles A Year Gradual?

What Can I Do?

I have often been asked by naysayers, if the poles are really going to shift causing earthquakes, massive flooding, tsunami's, volcanic eruptions and weather changes . . . what can I do about it?

Uh . . . I'm not a brain surgeon, but if I lived next to the coast, I would simple move to higher ground.

If food and water shortages are to become a reality what can I do about it?

Uh . . . Gee, I don't know maybe buy some extra food (non-perishable items) and water every time you go to the grocery store.

My thoughts on the subject is that one might want to prepare just in case.

My point is that if The Powers That Be knew beyond a shadow of a doubt that massive geological upheavals are to occur in our near future, does anyone really think that we the public would be informed? They need the economy to keep on working so that they can sneak away into the night unnoticed.

The reason I wrote this article is not to scare anyone, but to inform them. If one pays attention to the weather World Wide and not just in your area, then they will begin to see a pattern and notice that all the flooding cannot be due to just rain.

Officials have admitted publicly that the Poles are moving at a rate of 40 miles a year, this is NOT a gradual rate. In ten years the poles will have moved the width of Colorado, that is an all day drive, does anyone think that is a gradual shift?

Did We Miss Something?

Related Books on the Topic 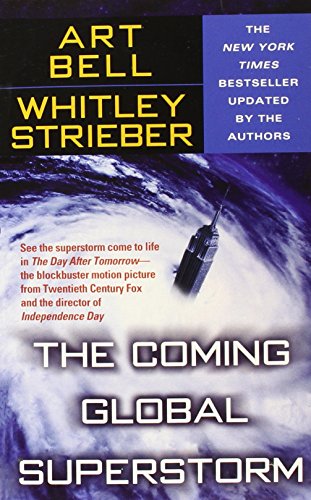 The Coming Global Superstorm
This book outlines a possible scenario of how and why ice ages can and do happen throughout history. Just one cool summer could produce this scenario, very interesting read.
Buy Now