About Blackbeard the Pirate

Blackbeard, the infamous legendary pirate who ruled the Atlantic seas in the early 1700s was a man shrouded in mystery. Indeed, historians have pieced together the last 18 months of his life, but before that, not much is known.

He was born as Edward Teach (or even Thatch). Before he became a pirate of his own sloop, he may have been a privateer.

A privateer was a person who plundered enemy ships under the blessing of a government during a war. When a privateer gained possession of items from a ship, a percentage of it went back to the government for whom the privateer worked.

Because privateers learned to live a lifestyle that involved adventures on the high seas, many of them would go into “private business” when a government contract finished. They would become pirates, essentially carrying on their duties as privateers, but now illegally.

Pirates would raid ships and keep the loot for themselves, dividing it among their crew. Often the pirate did not pilot his own ship and would divide his booty with his pilot. This way, pirates could focus on robbing other ships and commanding their crews.

How Blackbeard Got His Name

Teach got his start after arriving in the Bahamas in 1716 and befriended a pirate named Benjamin Hornigold. He served under him for only a short time, but gained valuable skills as a pirate.

By 1717, Teach gained control of a French ship, La Concorde. From there, he really began to build his notorious pirating career.

When he took control of La Concorde, he allowed slaves and privateers to serve on his ship. There was no loss of life.

With that, his nickname began to catch on: Blackbeard. His characteristic features were a long black beard that started high on his face. He let the beard grow long and would separate it into many braids, tied with ribbons.

He only helped his startling look by inserting slow-burning cords of wood into his hair that would smolder and send off smoke. This may be the stuff of legend, but this revolting image is what people think of when it comes to Blackbeard.

Ocracoke and Pamlico Sound, Where Blackbeard Liked To Hide 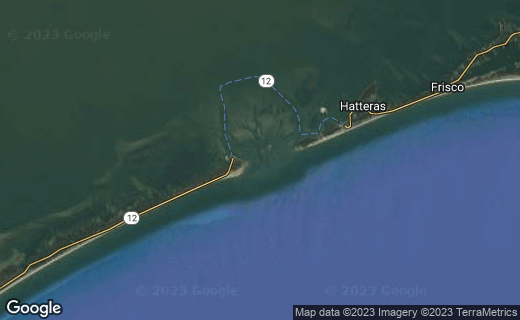 Blackbeard the Pirate Was Democratic

He used his monstrous image to intimidate other people and ships. People would often surrender without a fight to him because he looked so terrifying and his reputation preceded him. He actually engaged in much less physical violence than other pirates.

In 1718, flourishing in his endeavors, Blackbeard was the commander of four ships and over three hundred crew members.

He was known as a democratic leader. Many pirates held democracy in high regard, though it lacked such virtues as humanitarianism or equal justice for those not onboard their ships.

He also ruled his ships with equality. African slaves and anyone else who served under him had equal rights as long as they contributed to the well-being of the crew and did their part.

One of Blackbeard’s more infamous antics was in May of 1718. He was in the port at Charleston, SC and took control of the harbor. He plundered quite a few ships, including one bound for London. This London-bound ship had quite a few well-to-do members of European society on board.

Blackbeard took them hostage and demanded a medicine chest. He declared he would spare the hostages if they provided him with what he asked. He gave the government of Charleston a deadline.

The deadline came and went and the passengers feared for their lives. Blackbeard continued boarding and robbing ships while he waited to see what officials were going to do.

Finally, they relented and he got his chest of medicine. With that, he released the hostages and headed north on his ship, Queen Anne’s Revenge.

Blackbeard’s flagship, Queen Anne’s Revenge was heavily armed. However, he lost her at Beaufort Inlet, due to the ever-moving sands near the Outer Banks of North Carolina.

Do You Think Blackbeard Really Sunk His Own Ship

Historians believe they found Blackbeard's ship exactly 278 years after it was lost. They aren’t 100% sure, but because of the dates of various artifacts on it, they are fairly certain that they have found it sunken in the depths of the sea. It was covered with barnacles and coral by the time they found it and was also a victim of salt-water erosion. That has made it extremely difficult to positively identify her.

Some say Blackbeard deliberately destroyed his ship to make his fleet a smaller target for would-be attackers.

At about this time, the English king declared he wanted to curb piracy and make the seas safer. He pardoned countless pirates through the governments of the colonies. North Carolina governor Charles Eden pardoned Blackbeard.

Blackbeard didn’t give up his pirating ways, however. Many speculated that Eden was on the pirates’ side. He did little to stop piracy along the coast of his state.

Blackbeard was so disposed to live the nomadic life of a pirate, he never settled in one place for long. Many stories exist about how Blackbeard married a dozen different women during the course of his life, staying with each one only a short time. He always returned to his ships on the sea.

Eventually, however, Blackbeard’s enemies caught up to him. In November of 1718, Lieutenant Robert Maynard commanded two ships to try to defeat Blackbeard. The governor of Virginia, Alexander Spotswood, was not sympathetic to the pirates’ cause. He ordered Maynard to dispatch Blackbeard at whatever the cost.

Maynard commanded two vessels. He had many less men to fight than Blackbeard and his ships weren’t armed so that he would deftly navigate the inlets of the Outer Banks. The Outer Banks were (and still are) notorious for their shoals and ever-moving sandbars.

Despite these odds, he still confronted Blackbeard.

Once their ships crossed, Blackbeard fired volleys of cannons toward Maynard’s sloops. He crippled Maynard’s second ship, The Ranger, and killed its captain.

Midst all the smoke and gunfire, Blackbeard saw a lot of carnage on Maynard’s first ship, The Jane. He didn’t see any life whatsoever.

Moments later, he boarded Jane with his crew. What he didn’t know was that Maynard ordered his troops to hide out of sight and wait. As soon as Blackbeard was on his ship, dozens of men pummeled the invaders. Blackbeard whipped out two small guns he carried with him, firing shot after shot., but not really finding any targets.

Maynard, however, had a more sure shot, and fired his own gun. One bullet hit Blackbeard. He stumbled and was disoriented momentarily but recovered enough to take out his sword and begin fighting Maynard.

Blackbeard’s sword was stronger than Maynard’s. His sword broke Maynard’s, and Blackbeard cornered him. Just as Blackbeard raised his own sword to finish off his enemy, a member of Maynard’s crew came up behind Blackbeard and slit his throat.

Maynard finished the job by decapitating Blackbeard and hung his head on the bow of his ship. This would serve as a warning against piracy. Crewmembers disposed of Blackbeard’s body by throwing it overboard.

Blackbeard’s tales of piracy had far-reaching effects. When he died, places as far away as Boston published news of his death in their papers. Benjamin Franklin himself even wrote a ballad about Blackbeard entitled, “The Downfall of Piracy”. Though the original words are lost, the fact that Franklin was moved to write about Blackbeard speaks volumes about his deeds out at sea.