July 1960 - A Landmark Month That Lives On In Surprising Obscurity

July 1960 was an interesting month, notable for the astonishing lack of historic moments that took place during those 31 days.

Oh sure, to those who were born in July 1960, it was a bit of a landmark. And there was Somali Independence Day... and Elvis hit the charts with It's Now or Never,one of his biggest singles ever... and the Etch-A-Sketch appeared in toy stores for the first time... and the Stars and Stripes got 50 stars... and JFK snagged the Democratic nomination... but really, who remembers all those things now?

No, July 1960 languishes sadly in the shadows, as far as popular memory goes.

So let's track down those golden gems of events and give that long-ago month its rightful place in the public eye. Join us, won't you, in a fond look back at July 1960...

Photo: Ceremony of transfer from Army control to NASA control July 1, 1960 By US Army [Public domain], via Wikimedia Commons

The tricky-knobbed Etch-A-Sketch was to the children of the '60s what the iPhone is to today's youth. Just consider this conversation, which could have been recorded (in sterophonic 4-track sound on a mod slim-line tape machine!) in many North American homes, July 1960 ... 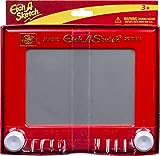 Hot Summer On the Hit Parade

When those wacky kids weren's busy with good clean fun of twiddling knobs on the Etch-a-Sketch, they were turning the knobs on the car radio or bedroom transistor set, seekingto tune in the latest musical hits - rock 'n' roll music, of course, to drive the oldsters to distraction and heat up a hot summer night. Who else turned on the romantic steam, back in July 1960, like the King, the one and only Elvis Presley?

Elvis Presley's single "It's Now Or Never" (B-side:"A Mess of Blues") was released in July 1960 and launched itself immediately to the top of the UK and US charts, re-introducing the singer to his public after a stint of military service at a US base in Germany.

With lyrics by Wally Gold and Aaron Schroeder set to the tune of O Sole Mio, in July 1960, Elvis's softer side won over even the most conservative of radio station programmers - and reclaimed the hearts of record-buying fans, to the tune of 20 million copies.

In this fan video, the song is played over live footage of Sergeant Presley as he returns to the United States (March 1960) and meets the press - ready to re-invent his hip-swivelling bad-boy image as a clean-cut young American crooner. Take a listen!

The speech JFK gave at the 1960 Democratic National Convention, 15 July 1960, came to be called "The New Frontier," a phrase that seems now to weirdly foreshadow Star Trek's "final frontier," for those of us who grew up in the 1960s as hopeless nerds...

Other campaign communications from JFK:

Meanwhile, in Fashion... - In July 1960, Jackie Kennedy sets the style

Jacqueline Kennedy refuses to wear another dress that looked like a lampshade, declares that girls who wear fur coats look like roadkill (I'm paraphrasing here; she probably didn't use the term roadkill), and popularizes the lean, tailored, A-line styles that were the bane of "hippy" women well into the next decade.

Of course, that's not all.

My friend John Tannahill has a whole different take on the magical month of July 1960, to begin with, including an especially loving look at our beloved iconic toy Etch-a-Sketch. John dubs July 1960 the "Most Important Month of the Twentieth Century" - see if you agree!

A few other things of note did happen in July 1960, and this page of mine is a work in progress. In fact, there's a whole (slim) file folder of July 1960 facts and frivolities, sitting on my desktop, just waiting for time to be added here.