Mighty Mom is a keen observer of life. She shares her personal experiences and opinions in helpful and often amusing ways.

When it comes to horror, there are many genres. Personally, I lean toward the psychological thriller. Monsters from the deep or giant apes are not for me. Aliens from space? No thanks. But draw me into the sociopath's lair and I'm one happy moviegoer. I love a good cat-and-mouse between sickos and the good guys who dare climb up into their heads. I love the mystery of not quite knowing if something "could" happen or "did" happen -- that makes it all the more frightening. Most of all, I love surprise endings!

And so, without further prologue, I give you Mighty Mom's top 10 scariest movies. I've listed them in REVERSE order of my own personal preference.

When fans turn fanatic, watch out. Stephen King's fertile imagination has spawned many movies. What I like about "Misery" is that it's so real, and the action is so contained, that it could easily be a play.

Plot summary: Famous romance novelist Paul Sheldon (Caan) drives off the edge of a Colorado road during a blizzard, suffers two broken legs, and is rescued by his ''number one fan,'' Annie Wilkes (Bates), a repressed psychopathic ex-nurse who straps Paul into bed and makes him her patient ...and her prisoner. Entertainment Weekly says, "Bates gives Annie an underlying homicidal gleam. She has a gift for playing cheerily hostile, paranoid misfits."

MM comments: Even if you're used to writing on deadline, I hope you never experience the life-or-death pressure of writing for a "boss" as cruely demanding as Annie Wilkes!

Plot summary: Detective William Sommerset (Freeman), one week left before retirement, is assigned a new partner in the form of Detective David Mills (Pitt). The duo are on the trail of a demented serial killer, one who is killing people according to the punishments of the Seven Deadly Sins. Although shown after-the-fact, there is no doubt about the torture and depravity associated with these murders. The perpetrator gets extra points for attention-to-gory-detail.

MM comments: You wanna talk about surprise endings!? This one will knock your block off!

Plot summary: Another Colorado town. 15-year-old Genevieve Gage and her best friend Tiana Moore spend a lot of time surfing the Internet and sending messages to strangers in chat rooms. Upon meeting a "student" who goes by the screen name of Captain Howdy, Genevieve and Tiana decide to attend a party at Captain Howdy's house. Tiana's tortured body is found in a car's trunk, her mouth stitched shut. Genevieve is held captive with other teens by the schizophrenic Captain Howdy. He's into collecting his "chat room friends" and adorning them with body art that includes tattooing, piercing, branding, and scarification.

MM comments: I honestly don't recall anything about the plot. The naked torture victims and close-ups of human body parts being pierced by large spikes gives me shivers, tho. Another moral of this story: like bipolars, schizophrenics like Captain Howdy should stay on their meds! And teens should be leery that not all "friends" are really friendly!

It wants ME... the house wants MEEEEE

Based on the book by Shirley Jackson, this gothic B/W film is directed by Robert Wise. The star is definitely the haunted mansion, Hill House. And since this is 1963, the special effects are effective, not overdone.

Plot summary: Dr. Markway, doing research to prove the existence of ghosts, investigates Hill House, a large, eerie mansion with a lurid history of violent death and insanity. With him are the skeptical young Luke, who stands to inherit the house, the mysterious and clairvoyant Theodora and the insecure, timid Eleanor (Julie Harris -- in a defining role). As time goes by it becomes obvious that they have gotten more than they bargained for as the ghostly presence in the house manifests itself in horrific and deadly ways.

MM comments: I remember first watching this with my mother sometime in the 1960s or early 1970s. It left an indelible impression on me then. Further viewings have not disappointed. Would definitely not be the same in color. 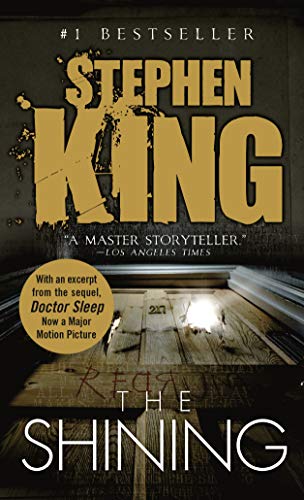 Plot Summary: Novelist Jack Torrance take a job as a winter caretaker of the isolated (also Colorado if I'm not mistaken!) Overlook Hotel. Jack brings his wife Wendy and his son Danny, who has a mysterious power known as "The Shining" that shows him things from the past and future. As the long winter sets in, horrific visions of past misdeeds perpetrated at the Overlook become commonplace. Jack descends into insanity and turns on his family.

MM comments: Who is the villain in this story? Is it the haunted hotel? Is it sensory deprivation? Or is it the maddening nature of writing itself? Be careful hubbers. If you find yourself typing "All work and no play makes Jack a dull boy" over and over and over, step away from any sharp tools and get professional help immediately.

Plot summary: Skeptical journalist Rachel Keller (Naomi Watts) goes to the Pacific Northwest to investigate the mysterious death of her niece and three friends, who all died on the same day at the same time- 10:00 PM exactly 1 week after watching a mysterious video. Rachel finds pictures of the cabin where her niece and her friends had stayed a week before their deaths. Rachel goes to the cabin and finds a videotape there. The videotape is linked to a string of suicides at a horse ranch. Needless to say, she can't resist watching it, thus setting off the death clock for herself. With one week to live, Rachel races against time to find out the secret of Anna Morgan and her creepy daughter Samara.

MM comments: The suicide-by-electrocution scene really stunned me. The niece whose hair turned stark white was pretty unexpected, too. But there are creepy scenes and good tension throughout -- up to the very last.

You DON'T Want this Tooth Fairy to Visit!

Plot summary: Red Dragon, the Thomas Harris novel that introduced serial killer Hannibal Lecter to the world, was adapted for the screen by Michael Mann as "Manhunter." Criminal profiler Will Graham (Petersen) has an uncanny ability to think like the killers he tracks. Will has been in retirement since catching Hannibal "the Cannibal" Lecter (Brian Cox). Being inside that particular deranged mind caused Will to have a nervous breakdown. Will's boss Jack Crawford (Dennis Farina) visits Will at his home on the beach (Florida) , showing him pictures from a family murder scene and asking for his help in catching a new killer they have dubbed "the Tooth Fairy" (Tom Noonan).

MM comments: I read the book first. Usually that leads to disappointment with the film version. But I LOVE this movie. What I find most insidious is that if a demented serial killer targets your family, you have no idea -- until it's too late.

A lethal form of identity theft

Plot summary: Yep. Another FBI profiler, this time a profilerette. Special Agent Illeana Scott (AJ) steps in to get inside the head of a cunning serial killer in Montreal. She theorizes that the chameleon-like killer is "life-jacking" - assuming the lives and identities of his victims. Is the killer in plain sight? Could he really be that bold and cunning???

MM comments: I won't reveal the trick ending, but let me say that there are twists, turns and double-crosses in this film to keep you guessing till the end.

Stay far away from Manderley!

I'm as big a fan of "Psycho" as the next horror junkie, but my pick goes to this lesser-known Hitchcock film. Starring Joan Fontaine and Laurence Olivier (no one does "brooding" like Sir Laurence), Judith Anderson and Nigel Bruce.

Plot summary: "Rebecca" s a compelling mystery/haunting ghost story about a tortured romance, a literal translation of Daphne du Maurier's 1938 gothic novel of the same name, in the tradition of Charlotte Bronte's Jane Eyre. The film follows the tragic courtship, marriage and relationship of a naïve, plain young woman (Fontaine) to an aristocratic, moody and mysterious widower (Olivier) who lives in an estate called Manderley. The shy bride experiences fear, pain and doubt when psychologically dominated by the 'presence' (and memories) of her new husband's deceased first wife (named Rebecca, but never seen on screen). She is also tormented by Rebecca's sinsister housekeeper (played by Anderson). Only by film's end, with the flaming destruction of the estate, do the real character and secrets of Rebecca's death become clear.

MM comments: I'm surpised more people don't know about this movie. If you prefer gothic to gore, this is a gotta see!

And Last but Certainly not Least...

Based on the novel by Thomas Harris. Directed by Jonathan Demme. Starring Jodie Foster, Anthony Hopkins, Scot Glenn, Anthony Heald and Ted Levine (who is now in the series "Monk").

Plot summary: Serial killer Buffalo Bill is kidnapping, murdering and skinning the hides off young women across the midwest. Young FBI agent Clarice Starling is assigned to the case by her boss/mentor Jack Crawford. Brave Clarice attempts to gain insight into the twisted mind of the killer by interviewing Hannibal "the Cannibal" Lecter. As she matches wits with Lecter -who has the darkest of all minds- and follows his clues, Clarice solves the case in a stunning denouement.

MM comments: From the moment I first saw the preview posters in theatres I HAD to know: Why does the woman have a butterfly over her mouth? What can butterflies possibly have to do with silencing lambs?

You'll never listen to the song "American Girl" or look at sewing or poodles the same way again!

The Silence of the Lambs
Buy Now