The Secret Life of marilyn Monroe

She was born Norma Jean Baker in Los Angeles 1926. Her troubles started early in life, for her birth was illegitimate, and her childhood was spent in orphanages and foster homes, while her mother spent most of her life in mental hospitals.

Norma Jean was lonely and insecure, leading to her early marriage at age 16. The marriage did not last long, and during world War II Marilyn was working in a factory while picking up side work as a model. She was not very successful, but was merely one of thousands of many disadvantaged girls desperately trying to get ahead.

Norma Jean was noticed in passing by Howard Hughes and that resulted in her landing an agent and screen test, however, Norma Jean was just another face int he crowd and she knew that if she wanted to become hugely popular she would have to have plastic surgery on her face to make it more feminine, like Lana Turner's. Plastic surgery in the 40's was not any where as mainstream as it is today, and most Hollywood stars lived with their imperfections. But Norma Jean wanted the whole 9 yards, and to get it, she needed power, and power would only come from devastating beauty.

She had her nose, chin and jaw remolded, and became Marilyn Monroe. She began getting parts in movies, and had a memorable walk on part in All About Eve playing a dumb blond. 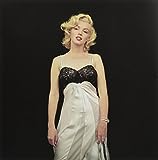 All About Marilyn to the end

She was moving along, and still desperately clinging to the hope of becoming a major star, and in the early 50's it was looking like her ship was going to come in. She made Niagara and Gentlemen Prefer Blondes in 1953, and was at her stunning best. After a string of hit movies she took a break to marry Joe DiMaggio. An event that brought the couple valuable publicity.

Marilyn battled insecurities, and depression. She was trying to be accepted as a serious actress, and no matter how much work she did, and how much success she achieved, she was still never satisfied. She divorced Joe DiMaggio and married Arthur Miller bringing her a new respect among the intellectual crowd.

In 1957 she got the opportunity to play opposite one of the most respected actors in the business, Lawrence Olivier. Olivier was professional did not get along with Marilyn, and regularly fought with her on the set. She was growing very unreliable, sometimes not showing up, or arriving on the set late, costing the producers a fortune.

She continued to ride her popularity, but her looks were definitely slipping, and if she did not come up with a new image, and level of respect from the public, she would be just another has been.

Being adored by people and men in particular, was so important to Marilyn that having another persona was a difficult concept to grasp. Suddenly, In the early 60's she became interested in landing John F. Kennedy. They had an affair, and Marilyn had visions of becoming the first lady. In her desperate frame of mind winning a married man in an important position would have both placed her in a role that could have given her a level of respect, and going from top to sex symbol to the level of sophisticated first lady, would not be a bad way to round out a career, and it would have greatly boosted her shaky ego. She had been getting what she wanted since the early 50's and now the doors were beginning to close on her. Kennedy would cheat with the greatest of ease, but like Big Daddy Joe, he maintained his facade of "married family man."

In 1962 she overdosed on barbituates at 36. Her final years were spent drinking heavily, and checking herself into psychiatric hospitals.

There have been many books written about Marilyn Monroe. Many sensationalizing her death by stating she was murdered, but the film footage from her later years combined with what those close to her have said, conclude that she committed suicide.