A voice over of the main character, Fletcher, getting ‘sent down’ (incarcerated) for 5 years (narrated by Ronnie Barker himself).

We are told he is a ‘career criminal’ so this man has been in prison many times before.

The clashing of huge doors and the clinking of keys is heard around the echoing corridors of Slade Prison.

And so begins every episode of one of the best comedies ever to have been created in Britain.

Porridge (1974-1978) has a winning formula as a comedy because it used an ensemble cast so well. Ronnie Barker and Richard Beckinsale are cellmates in Slade Prison under the watchful gaze of Mr McKay, the hard Scottish prison guard played by Fulton Mackay and Mr Barraclough, McKay’s opposite, a guard who actually seems to like the prisoners (who then run rings around them), played to perfection by Brian Wilde.

The show was written by Dick Clement and Ian La Frenais who had already has considerable success with The Likely Lads and Whatever Happened To The Likely Lads in the late 60s and early 70s. They would go onto have further success with Auf Wiedersehen Pet and the movie, The Commitments.

Ronnie Barker plays Fletch as a lovable rogue. If there’s a way to beat the system, he will find it. He knows every trick in the book and he is like a mentor to the young, first time in prison Godber, played by Richard Beckinsale. Both are ably assisted by one of the strongest ensemble casts in comedy history, the characters are wonderful – Ives, Warren, Lukewarm (the wonderfully camp Christopher Biggins), McLaren, Mr Collinson and Harry Grout, the prison hard nut, feared by the rest, played brilliantly by Peter Vaughn. Surprisingly, Vaughn appeared in less than 10 episodes in 3 series but his performance is so memorable that viewers always seem to remember his name.

Clement and LaFrenais seem to have copied the ensemble recipe for success offered up by shows like Bilko, The Lucille Ball Show and in the UK, The Rag Trade and Nearest and Dearest; people like to see the same characters, they like familiarity. Ronnie Barker makes Fletch a very likeable, funny, wily bloke, out for his own ends to get what he can from the worst of circumstances. The other characters are used as catalysts and he plays off them really well.

Porridge run for 3 seasons and was made into a film in 1979, which is still shown regularly on British TV retro channels like GOLD and Dave TV.

It had a follow-up show, ‘Going Straight’ about Fletch after his release from Slade Prison but it never achieved the same success as Porridge in spite on winning Ronnie Barker two BAFTA awards.

Porridge is one of those TV comedies which actually ended on a high note. Even the film which was made after the show fininshed was a big success. The show had a winning formula and Clement, LaFrenais, Barker et al are to be commended for not letting it drag on until it was unpopular, which so often happens in the UK.

Here are some of my other Great British Comedy Reviews - more will follow soon. 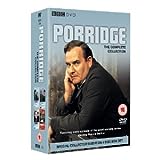