A Little Bit about Arch Enemy

Arch Enemy is a melodic death metal band from Sweden. Their 3rd album called Burning Bridges is pretty awesome! However, this is the last studio album to feature the power and roughness of Johan Liiva’s vocals. Arch Enemy is also famous for having founder Michael Amott on guitars. His younger brother Christopher joins him as the other guitarist. Sharlee D’Angelo plays the bass guitar while Daniel Erlandsson plays the drums.

Burning Bridges is the first album that got me into Arch Enemy and these guys are impressive. Where do we start? From the somewhat slower and fast picking Pilgrim, the catchy song Dead Inside to the incredibly fast Angelclaw, this album is full of melody!

What is your favorite song on the album Burning Bridges?

The Immortal refers to the way that human life really is. There has been so much research done, yet scientists have not really found ways that humans can be “immortal” in the literal sense. Life is a journey where we really discover what the human condition really is. In life, there is good and bad. The album only gets better as it goes along. Dead Inside is a really outstanding song with a terrific lead guitar performance! The song is about someone that has been deceived yet he does not find out for a very long time. He becomes dead inside, burning up with anger. He is then left to deal with the misery of being deceived and taken advantage of. Human beings unfortunately do deceive each other sometimes. The Pilgrim is about having the faith that you can be saved along with thousands of other immortal souls. There are miracles for those that believe in them. His whole life, he has served GOD believing that HE was just but he is not sure. You can be sure that GOD is a just one. HE loves all of us unconditionally no matter what. Consider it a miracle that the band brings up this subject as well. It may raise awareness of the importance of having faith that in the end GOD takes care of all of us. Silverwing is a really fast song about chasing our dreams in life and never allowing others to destroy our pride. A dream left not chased or not pursued is a dream that is just that-a dream with no purpose. I always had a dream, a vision that I was going to do freelance work and here I am sharing my knowledge with the world. Seed of Hate is about someone that has fears and doubts in him. He stands in the falling rain and in tears. He has been transformed into a person that hates others, a sort of misanthrope. The song features some of Johan’s best vocal work as well as excellent guitar riffing. I really thought that Johan is the best vocalist that Arch Enemy has had.

Angelclaw has one of the best choruses that I have ever heard as Johan Liiva shouts “Angelclaw” and the melody kicks in! This one is a definite classic! The album ends with the heavy yet atmospheric song Burning Bridges. The song is about a friendship or relationship that was never meant to last. Whether there are or were any lessons learned, the band brings up the subject for thought. Burning Bridges is one of the best shorter albums in the melodic death metal genre and one of the best that was released in the year 1999.

The Song Called Dead Inside

A Map of Halmstad Sweden, the City Where Arch Enemy Was Formed 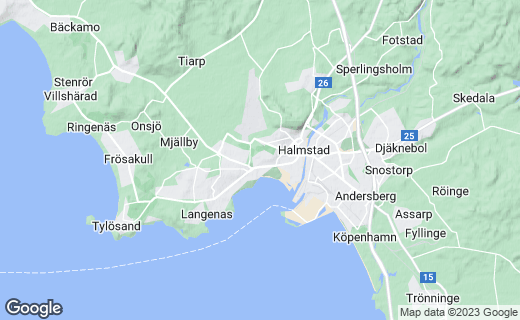