The full title is Gensomaden Saiyuki Requiem Character Song Mini Album - Four Songs. But it's rather too long to fit in the title at the top so it unfortunately had to be cut off. The essence of the title should still be there though. 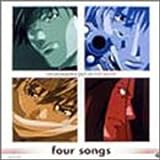 If you look at this music album featured on the right (the first product), you can see a case-in-point of what I'm talking about.

As you can see, the music album is rather horribly misnamed.

How will those looking for the Saiyuki Four Songs music album find what they're looking for if it's being labeled as a Drama CD?

Hopefully, this hub will help people find what they're looking for.

I know how difficult it can be to scour the Internet and click on practically all the pages in Google's search results just to find what you're looking for. I must have typed every variation of this music album's title as well as practically all possible keywords related to the Saiyuki series just to get something from the search results.

Saiyuki - Confronting Their Demons (Vol. 3)
Anime Gensomaden Saiyuki volume 3. The cover features Sha Gojyo, one of the 4 main characters in the series. His red hair and red eyes mark him as a hanyou (half-human, half-demon).
Buy Now

Know that the series is also known as simply "Saiyuki". The spelling of Gensomaden also varies. Sometime, you'll see it spelled as "Gensoumaden" and, for some reason, even, "Genso Maden", which just adds to the difficulty of finding what you're looking for.

This hub will be making a lot of references to Gensomaden Saiyuki Requiem Movie because of its relation to the music album in question.

If you want more information about this movie, then you can just look at this.

Saiyuki - Old Friends New Enemies (Vol. 2)
Anime Gensomaden Saiyuki volume 2. The cover features Son Goku, one of the 4 main characters in this series. He appears to be the youngest in the group, but he's actually the oldest, not that that makes him mature. He loves eating. in fact, his trademark phrase is, "Sanzo, harahetta (I'm hungry)". He really looks up to Sanzo, argues a lot with Gojyo and loves Hakkai's delicious cooking.
Buy Now

This album contains 11 tracks but only 4 are songs. The rest are all instrumental music.

The 4 songs are each sung by the Sanzo-ikkou's respective seiyuus (voice actors).

Saiyuki - Storms (Vol. 4) [DVD]
Anime Gensomaden Saiyuki volume 4. The cover features Cho Hakkai, another of the 4 main characters in this series. He's actually a human-turned demon. He's mild-mannered, kind and polite but don't piss him off or you'll regret it
Buy Now

The last three are all background instrumental music from the movie Gensomaden Saiyuki Requiem.

But if you go to Amazon Japan's information page on the Four Songs music album, you'll be able to listen to very short samples of the entire album's track list.

This was sung by Seki Toshihiko who is Sanzo's seiyuu.

You can definitely hear Sanzo's voice in listening to this song.

This song sounds serious but it also has a nice catchy tune to it.

The words 'can't you see? It is my solitude' are sung in English.

The translated lyrics has much meaning with words and phrases like 'my wounds that demand a meaning have opened again, although I know there are no answers', and 'I who am searching, what do I want to see?'.

This song seems to be speaking of Sanzo who does have a dark and tragic past.

I carry the punishments, and when I sleep, only the lies keep growing fainter

Saiyuki - Journey Begins (Vol 1)
Anime Gensomaden Saiyuki volume 1. The cover features Genjo Sanzo, the leader of the Sanzo-ikkou. He's a monk of the highest order, but he smokes, drinks and kills.
Buy Now

Aside from being an orphan, he had had to see his mentor and father figure, Komyou (or Koumyou) Sanzo, die right in front of him when he was still but a young child.

To top it off, the demons who offed Komyou also stole his Seiten Kyomon (the light sutra), which now rightfully belonged to Sanzo.

Now Sanzo is searching for his mentor's stolen memento.

Before he met Goku, Gojyo and Hakkai, it can be said that Sanzo was pretty much alone in spite of being surrounded by many other people because he wasn't close to any of them.

When only pain is truth / My Soul / It cannot be saved

2. Proud Of My Loneliness

This was sung by Hoshi Soichiro who is Goku's seiyuu.

The song has a different tone to it that seems to sound like a mixture between serious and not-so-serious.

The title of the song is sung in English.

The translated lyrics has a lot of meaning with words and phrases like 'I'm free, the sadness forgotten, I have no interest in returning to that far off evening', and 'in unloosening chains, my heart is bound, unchanging, the sky I am gazing at is oppressively blinding'.

The song seems to be speaking of Goku who, in spite of his cheerful and happy-go-lucky nature, does have a sad past. He has previously been imprisoned in a cave for years where he was all alone.

One more time, embracing all of my past and dreams, I'll keep on living

Proud Of My Loneliness by Goku

He, of course, longed to be free, and he kept calling out to someone to come and save him.

It was Sanzo who eventually came to free him from that cave.

Sanzo had said that he could hear Goku's voice calling him and it was irritating and annoying him.

So he set out to look for Goku to tell him to shut up and stop calling him. In the end, when he found Goku, he ended up taking the brunet with him. With his three friends by his side, Goku isn't alone anymore. He's free and he has people to be there for him.

One more time, embracing all the tears and smiles, I'll keep on living

This was sung by Hirata Hiroaki who is Gojyo's seiyuu.

This song sounds very lively with such a catchy tune that really fits Gojyo's wonderful voice. The fun beat of the song is rather ironic though, considering the seriousness of the translated lyrics.

The translated lyrics has a lot of meaning with words and phrases like 'though I've looked for love this much, I haven't fallen', 'rather than living long, I want to end it all', 'I haven't stepped down from important things', 'I gave up on what I wanted long ago', and 'pain left behind from struggling fingertips, I can just call that the truth'.

The song seems to be speaking of Gojyo who, like the rest of the Sanzo-ikkou, has his own sad past.

If I decorate the past with tears, I'd be telling sweet lies

Gojyo is actually a hanyou (a half-breed, half-human and half-demon) and this is signified by his red hair and eyes.

There are many people who consider hanyou as bad luck and say they are cursed, which leads to hanyous being shunned by most people.

Gojyo has had to experience this too. He sees his hair and eyes as the red color of blood.

And he hates this, having a lot of issues with this. Once, he even cut off his shoulder-length red hair.

Though I've looked for love this much, I haven't fallen. I'm not interested in reciting stories from long ago.

This was sung by Ishida Akira who is Hakkai's seiyuu.

This isn't really like a song though because it's mostly Hakkai talking.

But there is background music and some parts are sort-of sung like the English words 'I have something in my mind, something so sweet'.

The translated words of what Hakkai is saying does have a lot of meaning to it with such lines as 'speak the words of beloved reasons and the purpose of human life', 'that day I chose to leave that town without so many things from long ago', and 'living embracing nothing but hatred'.

This is really like Hakkai speaking and telling those listening what's on his mind.

My field of vision was covered with nothing but hypocrisy

— Sei Mei Sen... Something In My Mind (translated English lyrics)

Sei Me Sen... Something In My Mind by Hakkai

He also seems to be referencing his tragic past.

He went to try to save her.

In his quest to do this, he ended up destroying a thousand demons, which turned him from a human into a demon.

His efforts were in vain though as, when he'd finally reached Kanan, he had to watch her end her life right in front of him. Hakkai still has issues and regrets about that of course. But, being with his three friends helped him not to dwell on the past and not let his demons keep haunting him all the time.

— Sei Mei Sen... Something In My Mind (translated English lyrics)

4.5 out of 5 stars from 4 ratings of Gensomaden Saiyuki Requiem - Four Songs

Not only are the songs amazing and great, they have also been sung by the seiyuus of the 4 main characters.

If you're unsure, then check out the song samples. You might find that you actually like the voices of the Sanzo-ikkou. Even the background and instrumentals sound good.

For more information on Saiyuki music albums, check these out: