Doctor Who - The Second Doctor

The failing health of William Hartnell (the actor who portrayed the very First Doctor), led to one of the major keys to the longevity and continual interest caused by the Doctor Who series – regeneration. By 1966, the producers of the show had to come up with some way to keep on air. Instead of asking the audience to suspend their disbelief to accept another actor in the same role, they made the role one with a changeable face.

The Second Doctor is notable for being the most poorly-documented of all the Doctors. For this reason, he is also the least known, today. Only 6 of 21 serials with the Second Doctor exist with all episodes intact – four of these have no video at all!

While fans have reconstructed the serials with recordings that children made off their television sets and pictures that were taken to offer the actors as souvenirs. Indeed, it took 30 years and a worldwide network of fans to trade tapes and files so the most complete “reconstructions” could be found.

Doctor Who: The Power of the Daleks
Buy Now

The face of the doctor wasn't the only thing to change when he was regenerated into a new form, apparently upon death from exhaustion. He suddenly was shorter, smaller, had a flair for playing the recorder, took relatively little care in his appearance and was significantly younger. Not only did a new actor take over, but the new actor was also allowed to take the character of the doctor in a new direction.

Of course, there are a few things that always remain. The doctor is brilliant, he has a highly developed sense of fairness and has already grown rather fond of humans. Patrick Troughton, though only 12 years younger than his predecessor, looked quite a bit more youthful than the white-wigged First Doctor Hartnell.

Already famous for his portrayal of the title character from “Robin Hood” and Phineas from “Jason and the Argonauts” on BBC television, Troughton's début as the Doctor was something of a television event among young people in the UK when it aired at the end of “The Tenth Planet” in October of 1966. Even more people watched when he took over the role full time in the “Power of the Daleks", commanding over 8 of 45 million possible viewers or, about an 18-share on a Saturday night).

How did Patrick Troughton play the Second Doctor?

Patrick Troughton was given a great deal of leeway in how he would portray a very different character of the Doctor. A long-time character actor, he had intended to approach the role as more of a swashbuckling hero, but would up using the persona suggested by Dr. Who creator, Sydney Newman. His “cosmic hobo” became the basis for his portrayal of the character from November 1966 to his final role in the monumental 10-part serial “The War Games,” which aired in June of 1969.

The Second Doctor is well known for being active, and much of the surviving footage depicts him and Jamie (McCrimmon) running around somewhere. Overtly cowardly, he is sometimes seen being talked into doing the right thing by the afore-mentioned Mr. McCrimmon.

By taking his “Cosmic Hobo” persona to the limit, he emulated Charlie Chaplin's Hobo character. Unlike Chaplin, Troughton is more direct about allowing the audience in on the joke: his fool is actually the most clever person in the room.

Gone are many of the historical serials of the original show – many of the Second Doctor's adventures take place in the relatively near-future of various other moons, planets, space stations and ships floating about in space, as well as contemporary Earth adventures.

Doctor Who with Jamie McCrimmon

While he played the doctor, he gave few interviews, preferring instead to knock a few pints back with his co-stars, most notably Frazer Hines, who played the longest-serving companion to date (by episode), Jamie McCrimmon. After three years in the role, during what many affectionately call “the rubber monster years,” Troughton retired from the role to pursue a career in film. Like other actors after him, he deemed seasons of the show to be long enough of playing such a prominent role without being forever typecast.

Having played the doctor between 1966 and 1969, he also came back for three additional specials before he died in 1987 (while attending a science fiction convention in the US).

What was the most recognisable trademark of the Second Doctor?

While all incarnations of the doctor require “thinking-time” the Second Doctor is the only one to play music while doing it. To this end, he is rarely, if ever, without the recorder he picked up shortly after regenerating. Also always at his side is a bandanna/kerchief that is used for a great many more things than runny noses.

Other parts of the Second Doctor's dress are also iconic, such as is 1920s style, over-sized beaver coat, tied with a rough string. In its very deep pockets, he keeps comical surprises that seem to regularly come in handy, such as fire crackers and other trinkets from his travels. Unlike the long coat of the First Doctor, his replacement acts the part of a buffoon in a shorter coat with tails.

Ben and Polly with The Doctor

Who were the Second Doctor’s assistants?

When he regenerated, the Second Doctor “inherited” two human companions from 1960s London. Polly and Ben Jackson were both involved with the computer plot to take over the Earth in “The War Machines,” but inadvertently found themselves on the TARDIS when Dodo decided to stay home. They continued to travel together until the Doctor made another stop in contemporary London, leaving after “The Faceless Ones” in April of 1967.

After Polly and Ben left, the next adventure introduced viewers to a young 19th century woman named Victoria Waterfield. Naturally timid and recently orphaned by the Daleks, she takes off in the TARDIS to try to forget the events that led to her life-changing events. She is more contemporary to Jamie than their 20th century counterparts and their relationship is very different.

The 22nd century young woman, Zoe Heriot, joins Jamie and the Doctor while serving aboard the space station that serves as the setting of “The Wheel in Space.” There, she serves as a “librarian” of sorts, and has been trained as a “human computer” on the colony she calls home. Her mathematics and logic rival (and sometimes surpass) that of the Doctor, but she lacks some elements of common sense that Jamie has in spades, making their relationship somewhat more adversarial than with Victoria.

Though not a companion, we meet Alistair Gordon Lethbridge-Stewart in “The Invasion” while he's still a Captain. The character would later become known to viewers of the show for several decades as The Brigadier, leader of the United Nations Intelligence Task-force (UNIT), now seen in both Doctor Who and the spin-off show, Torchwood.

The very first use of the infamous sonic screwdriver is observed with the Second Doctor, though its use is far more pronounced and varied in later serials. He also proves adept at cobbling together diverse technologies and improvising weapons against just about any threat.

Though not a technology, the Second Doctor exhibits a higher degree of mental prowess than the First Doctor. This culminates in long distance (and apparently compressed) communication with the Time Lords during his very last appearance.

Legacy of the Second Doctor

The Second Doctor is notable for having been such a profound influence upon the development of what has become a 45-year old depiction of a nine-hundred and something year-old Time Lord. The Fourth Doctor (and arguably the most popular of all time), Tom Baker (The Fourth Doctor), cites Patrick Troughton's performance as formative in his own interpretation of the character, as does Fifth Doctor Peter Davidson. Other subsequent actors who have played the role cite the Second Doctor as being influential.

War Games (which I find oddly reminiscne tof a scene from the Wizard of Oz - or is it just me?)

In addition to the Cybermen and the Daleks that the First Doctor tangled with on his adventures, new villainous adversaries showed up in abundance, including the Macra, an animated seaweed, zombie scientists with poison breath, several out-of-control robots and the Yeti-wielding Great Intelligence. Among several threatening inanimate objects seen with the Second Doctor include the poisonous bubbles sent by Ice Warriors (look for the creative and surprisingly threatening use of soap bubbles throughout the late 1960s) in “The Seeds of Death.”

Among the more common, though no less malevolent, threats to life and liberty the Doctor encounters are humanoids gone bad. This includes the world-dictator Salamander, mad scientists bent on world domination or revenge (take your pick), the militaristic Dominators, warring mining interests, power-hungry colonists, the War Lord and brutal British soldiers of the 18th century.

The Doctor's second regeneration into a third Time Lord

The Doctor continued his adventures with the enormously popular companion team of Jamie and Zoey throughout Season Six. Between April and June of 1969, the ten-part serial “The War Games” was broadcast on BBC-1. We meet the second person of his own “race” and are introduced to the Time Lords before this deliberative body punishes him for interference. His “lenient” sentence of exile to 20th century Earth is in deference to turning in The War Chief and making a passionate argument for the duty to set things right in the Universe.

As part of his punishment, his appearance is changed during a regenerative process that the season ends amid. This is notable as we only see the first part of the transformation in the black and white of the 1960s era of the show. The Third Doctor, Jon Pertwee, does not appear until the start of the next series, in the serial, “Spearhead From Space.”

When Patrick Troughton left the role of the sometimes Dr. John Smith in 1969, the show took up again with another acclaimed actor, Jon Pertwee in the role. When the series returned in 1970, it was in colour. It is rumoured that the doctor was indefinitely exiled into the UK by writers, due to budget constraints.

Doctor Who - The Second Regeneration

Want to know more? Here is the complete guide to this era 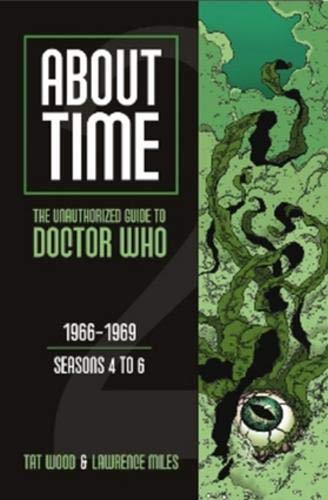 About Time 2: The Unauthorized Guide to Doctor Who (Seasons 4 to 6) (About Time series)
Buy Now

Doctor Who: The Power of the Daleks
Buy Now

Because of the shortage of footage of the Second Doctor, your best bet is to buy this: