A Hotel Becomes a Landmark and Leads To Lincoln

Samuel Gettys (English for the Irish "Getty") was the founder of the American Civil War site, Gettysburg, Pennsylvania around 1786 after the Revolutionary War was assured to be well over. He owned land at this time, but was financial unstable after the war. The community's first name was Gettystown when his son James Gettys (Getty) successfully sold parcels of land and saved the family from despair.

The family became famous, as did their namesake city and a likely descendant who became the foremost Lincoln re-enactor on the East Coast of the United States.

In 1804, James sold land to Mr. Robert Troxell, who erected a tavern on the property and called it Sign of the Buck. By 1863, deep into the war, the tavern had expanded to become the Union Hotel - note the name Union in a state belonging to the Confederacy.

After the three devastating days of battle at Gettysburg, the Union Hotel became a hospital. By 1888, the hotel was a tourist attraction called the City Hotel, wandered over by visitors from around the country who wanted to touch the grounds and hospital of Gettysburg.

If you have seen Daniel Day Lewis riding across those battlefields on horseback as Abraham Lincoln, you will have an inkling of the cold and haunting, ghostly ambiance of the grounds. Thrill seekers wanted to see it in 1888 as veterans gathered there for the 25th Anniversary of the battle. Gettysburg enjoyed a business increase that week.

The Gettys/Getty family became famous, as did their namesake city and a probable descendant who became the foremost Lincoln re-enactor on the East Coast of the United States.

The Gettys Hotel B & B 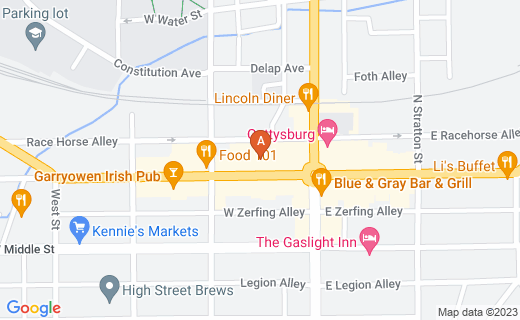 For those who enjoy the supernatural, the Gettys Hotel is known among tourists as having a haunted room. A "Ghost Quest" weekend has been popular with visitors, as is a special Lincoln Weekend.

National Historic Register Plaque Outside the B & B

The hotel turned a good business during the Reconstruction Era, particularly lucrative later from 1920 to the 1960s, as American families began the great caravan of automobile tours we now take for granted. They are even parodied by comedy films like National Lampoon's Vacation and the 2015 sequel, Vacation.

The decades of the 1970s and 1980s saw the building become an apartment high-rise, but the next decade saw a Youth Hostel there. It was renamed in 1995 as the James Gettys Hotel (actually a B & B) and has been places on the US National Register of Historic Places.

This hotel and its founder are not the only famous Gettys/Getty in Gettysburg. Another Getty, possibly a descendant of Samuel and James, was a most famous Abraham Lincoln actor. 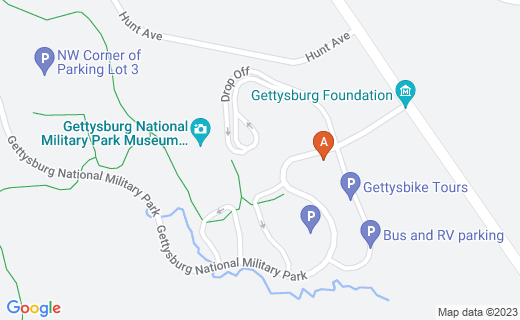 The President Dwight D. Eisenhower National Historic Site is located near the other Gettysburg history attractions, just to the southwest of them. All of these locations are nearby the Gettys Hotel B & B and other recommended accommodations for visiting Gettysburg, especially during the Annual Battle of Gettysburg Re-Enactment.

Civil War re-enactors and living history actors populate the historic sites of Gettysburg and preserve accurate American history as they help us remember the important people of a national past. Such re-enactors have become important in accurate film portrayals of Abraham Lincoln and his administration as well. 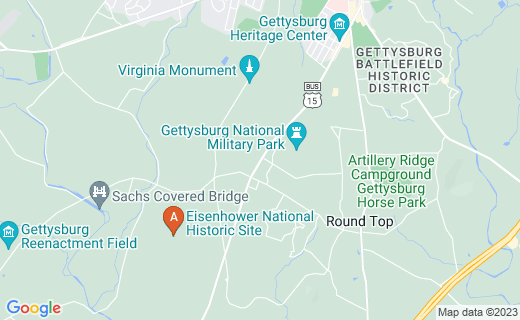 The Embodiment of Lincoln Today

The Lincoln Forum leadership and members were devastated in September, 2015 to learn that actor James Getty, known as Gettysburg's most famous resident in the 21st century, had died at age 83. He embodied Abraham Lincoln fully as he performed the Gettysburg Address at each annual celebration of the anniversary of the related Civil War Battle.

Someone else will need to portray Lincoln for Gettysburg, Pennsylvania beginning in 2016. Lincoln himself lived only to to age 56, while Getty lived an additional three decades and was still believable at the 16th President.

For those who admire Abraham Lincoln and like to learn more about the American Civil War, The Lincoln Forum is an organization that collects ongoing research out this respected US President. Teachers and students can enjoy its many events, but anyone is welcomed to subscribe free-of-charge to benefit from its newsletters.

Other offerings include symposia, tours, re-enactments, author presentations like Karen Abbott's Liar, Temptress, Soldier, Spy: Four Women Undercover in the Civil War, and other events. If not for the regular communications and announcements from this organization, many of us would not have known about the passing of Jim Getty.

The unforgettable James Getty of the 21sty Century was a top notch re-enactor who delivered Abraham Lincoln in person to audiences in Gettysburg for 40 years, beginning at the age of approximately 43. He entertained and informed tourists, federal government departments, business and civic groups, classroom students, teachers, and symposium attendees.

Jim Getty was as much Lincoln as he was himself, as much Abraham Lincoln as Hal Holbrook is Mark Twain on stage. Getty was attracted to Lincoln for what he learned were the President's honorable goals and concern for America, and the methods he used to achieve those goals.

Getty began portraying the presidential hero in 1970 in Sandusky, Ohio because as he grew a beard, people remarked on his resemblance to Lincoln. Those remarks started him on his 40-year journey as the Civil War President. By 1977, he and his wife and youngest son, in high school, had moved to Gettysburg. For the last 15 years of his life and portrayals, he was a valued member of The Lincoln Forum. (Reference: The Lincoln Forum Bulletin, Fall 2014).