One of the Greats

Henry Fonda was an actor who commanded a lot of respect, and deservedly so. His tall, lean frame, soft voice, and air of moral integrity made him much in demand.

His acting career lasted almost 50 years and he appeared in some of the finest films of Hollywood's Golden Age. In 1978 he was given a Life Achievement Award by the American Film Institute and he is ranked at number 6 on their all time screen legends list.

In the years since his death, Fonda's career has been re-evaluated and he is now held in even higher regard than during his lifetime. His naturalistic, totally believable style of acting has been widely admired and he is recognized as one of the Hollywood greats of the classic era.

Henry Fonda was born in Grand Island, Nebraska, in 1905. As a youth he was good at sports, particularly running and swimming. After working part-time in his father's printing works he decided to become a journalist and he majored in journalism at the University of Minnesota.

In his late teens he became fascinated by the theatre, and after starting in amateur theatrics he decided to work full time in what he loved and he got a backstage job with the Omaha Community Playhouse where he frequently worked with Dorothea Brando, Marlon's mother. 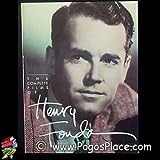 It was at Omaha that he started serious acting and he made a big impact in the lead role of 'Merton of the Movies' at the Playhouse in 1926. In 1928 he decided to become a full time professional and he moved to New York City where he spent 5 years with the University Players, his reputation, and the roles he played, growing each year. Here he first met and worked with Margaret Sullavan, to whom he was briefly married in 1931, and his lifelong friend, James Stewart.

By the early 1930s, Fonda was appearing more regularly in productions in New York and critics were beginning to notice him. He got his first big break in 1935 as the leading man in 20th Century Fox's screen adaptation of 'The Farmer Takes a Wife' which he had played on Broadway to great acclaim.

His Hollywood career then took off spectacularly, with performances in the backwoods drama The Trail of the Lonesome Pine (1936), the first Technicolor movie filmed outdoors, and Fritz Lang's You Only Live Once in 1937. A critical success opposite Bette Davis, who had picked Fonda, in the film Jezebel (1938), was followed the following year by the title role in Young Mr. Lincoln and his first collaboration with director John Ford, quickly followed by two more Ford projects, Drums Along the Mohawk (1939) and as Tom Joad in The Grapes of Wrath (1940), for which Fonda received an Academy Award nomination. Joad is regarded by many to be Fonda's finest role, but it was his friend James Stewart who won the Best Actor award for his role in The Philadelphia Story.

In Preston Sturges's The Lady Eve (1941), Fonda showed that he could play comedy too, appearing opposite Barbara Stanwyck as an unworldly innocent duped by a confidence trickster. He then partnered Gene Tierney in the successful screwball comedy Rings on Her Fingers in 1942.

After making 'The OxBow Incident' in 1943, Fonda enlisted in the Navy. He served for three years, and was commissioned as a Lieutenant Junior Grade in Air Combat Intelligence in the Central Pacific. He was awarded a Presidential Citation and the Bronze Star.

After war service, Fonda resumed his partnership with Ford as Wyatt Earp in My Darling Clementine (1946), as a Mexican priest in The fugitive (1947), and in Fort Apache (1948), in a rare unsympathetic role as a rigid, martinet army colonel along with John Wayne and Shirley Temple in her first adult role. In all Fonda did seven post-war films until his contract with Fox expired.

At this point Fonda took an extended leave from Hollywood, returning to Broadway to play his most popular and Tony Award-winning) role in Mister Roberts, a comedy set on a US navy ship in World War II where Fonda, a junior officer, wages a private war against the captain.

He was later lured back to star in the movie version in 1955, starring with James Cagney, William Powell and Jack Lemmon. It was a troubled production. John Ford had been assigned to direct, but he wanted many changes; Fonda, who had invested much in the project, argued with him and at one point they came to blows. Ford was replaced as director and the pair never worked together again. Fonda went on to give a great performance in Alfred Hitchcock's The Wrong Man in 1956.

The following year Fonda made his first attempt at movie production with 12 Angry Men. The low budget production was completed in only seventeen days of filming and was well-received by critics worldwide. Fonda shared the Academy Award and Golden Globe nominations with co-producer Reginald Rose and won the 1958 BAFTA Award for Best Actor for his performance as "Juror 8", who with common sense and perseverance eventually sways the jury to an acquittal.

During the 1960's Fonda performed in a number of war movies and westerns, including 1962's The Longest Day and How the West Was Won, 1965's In Harm's Way and Battle of the Bulge. In the Cold War suspense film Fail-Safe (1964), Fonda played the resolute President of the United States who tries to avert a nuclear holocaust.

In Sergio Leone's Once Upon A Time In the West (1968), against type, he played Frank, a coldhearted killer and in the same year he teamed up with his old friend, james Stewart, in Firecreek, where Fonda once again played the heavy. In 1970, Fonda
and Stewart again co-starred in the western 'The Cheyenne Social Club'.

From 1959 Fonda had been interested in the new medium of television and from then on he alternated his movie commitments with TV. He starred as Marshal Simon Fry in the well-received series, The Deputy from 1959 to 1961, and in 'The Smith Family' (1971-72), and guested on dozens of other shows. His celebrated one-man show on famed trial lawyer Clarence Darrow was broadcast by NBC in 1974. He also narrated many films and TV programs, from The Battle of Midway (1942) to America's Sweetheart: The Mary Pickford Story (1981).

Despite failing health, Fonda continued making TV and movie appearances through the 70's and 80's, although quantity was winning over quality. He played in a number of mediocre disaster movies like 'Rollercoaster' and 'The Swarm' but he took longer breaks between films as he had been diagnosed with prostrate cancer and heart arrhythmia. His work was given full

appreciation by the critics and in 1979, the Tony Awards committee gave him a special award for his achievements on Broadway. He also received Lifetime Achievement awards from the Golden Globes and Academy Awards in 1980 and 1981.

There was one final and most important milestone for Fonda to reach. In 1981 he appeared in 'On Golden Pond' as an irascible old professor, philosophising and allowing himself to become more accessible as he nears the end of his life. The film co-starred and was initiated by his daughter, Jane Fonda, and marked a professional and personal triumph for Fonda. Directed by Mark Rydell, the project provided unprecedented collaborations between Fonda and Katharine Hepburn, and Jane Fonda. Jane has said that elements of the plot echoed their real-life father-daughter relationship. The film was well received by critics, and with eleven Academy Award nominations, it earned nearly $120 million at the box office, becoming an unexpected blockbuster. In addition to wins for Hepburn (Best Actress), and Thompson (Screenplay), On Golden Pond brought Fonda his only Oscar - for Best Actor (it also earned him a Golden Globe Best Actor award). Fonda was by that point too ill too attend the ceremony, and his daughter Jane Fonda accepted on his behalf. He was 76, and the oldest person ever to win the Best Actor award.

As a young actor, Fonda developed a reputation in Hollywood as something of a ladies' man and he was seen about town with many young actresses. In all he had five marriages. His first to Margaret Sullavan in 1931 ended after only 2 months. In 1936, he married a New York socialite, Frances Ford Seymour and they had two children, Peter and Jane. Frances was several times committed to a mental institution for depression. During one visit there in 1950, shortly after Fonda had requested a divorce, she committed suicide by slitting her throat with a razor.

Fonda married a third time later in the same year. The bride was was the stepdaughter of Oscar Hammerstein II, Susan Blanchard. He adopted her daughter, Amy, but the couple divorced in 1956. The following year Fonda married Afdera Franchetti, who was 28 years younger than him, and the daughter of an Italian aristocrat. They divorced in 1961.

Soon after, Fonda married the model, Shirlee Mae Adams, and they remained together until his death in 1982.

The Sky is Gray
Buy Now