Irish Songs and Singers to Remember

With the advent of St. Patrick's Day and the sacrifices of Lent put away temporarily, we can enjoy memories of these past and present artists of song and dance. Hundreds of Irish singers and song writers have added a depth of artistic expression to history, culture, and music that is hard to describe and impossible to grasp in a single article.

They have influenced all in the United Kingdom and many in the United States, particlularly in Appalachia and Allegheny folk and blue grass melodies and dancing. They sang in the hills and they sang as they worked their way across America to the West Coast with the railroads.

These are a few from the past and the present.

The Irish Tenor sings "The Minstrel Boy" in the following video. This is an Irish patriotic song written in the laste 1700s by Thomas Moore. Moore set his lyrics to the Irish tune of "The Moreen."

Moore likely composed his lyrics to honro his friends at Trinity College in Dublin, Ireland. These young men had fought and died in the 1798 Rebellion of the United Irishmen.

Moore's lyrics became famous and popular to the extent that Irishmen fighting in the American Civil War also sang it. It was sung in World War I and World War II as well by Irish descendants. Today, choirs of the protective services - fire and police - in large cities still sing this song, even though they are no longer predominantly Irish, as they once were. It is often played on bagpipes as well by popers' associations at funerals, including at those for men and women in the protective services.

"Danny Boy" came to replace this song as an Irish Army favorite, but John McCormack's rendition is still widely known:

The minstrel boy to the war is gone,
In the ranks of death you'll find him;
His father's sword he hath girded on,
And his wild harp slung behind him ...

Isle of Hope, Isle of Tears

The Irish Tenors and the First Immigrant at Ellis Island

The Three Tenors became famous around the world in the 1970s - 1990s. Added to global renown later were The Irish Tenors: Finbar Wright, Anthony Kearns and Ronan Tynan.

Isle of Hope Isle of Tears, sung by The Irish Tenors, is about Annie Moore, an Irishwoman. Annie Moore became the first immigrant into America through Ellis Island in New York.

Moore emigrated from County Cork on the steamship Nevada and arrived in America oon January 1, 1892. She was 15. It was her birthday.

As the first person to be processed through Ellis Island, she was awarded a $10 gold piece. Phillip and Anthony moore, her brother ebtered afterher. It is unclear whether they were related to Thomas Moore, who wrote The Minstrel Boy. 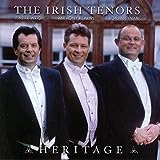 The Irish Tenors include Olympic Champion, Doctor, and Irish Tenor: Ronan Tynan. With two leg protheses, Ronan Tynan won record numbers of Gold Medials in the 1984 and 1988 Summer Paralympics competitions and became a world class vocalist. One year after having problematic legs amputated, he was winning track and field competitions. He went on to become a physician specialist in Orthopedic Sports Injuries, but is best known as a singer. Incredibly, he won numerous cometitions to become a member of The Irish Tenors.

He is a real winner, a tribute to Ireland and America, and one of my heroes

Irish singer Dennis Day is connected to Jack Benny, as they worked on radio and TV for the entire duration of Benny's radio and TV career. Jack discovered Dennis in 1939 and employed him long-term as a singer and comic sidekick, rather like Batman's Robin. Dennis appeared with Jack until the latter's death in 1974 - 35 years, although Benny maintained that he was still only 39 (a running joke).

The clip below is a song that is an Irish comedy/novelty number, often performed by Dennis Day in his appearances.

Ventriloquist and singer Jimmy Nelson was also the television spokesman for the Nestles' candy company. His dog Farfel would sing,

A mistake on the first audition, the snapping jaw got Jimmy Nelson the job.

Nelson had his own TV show for kids every day Monday - Friday afternoons evenings called "Studio 99 1/2" New Jersey beginning in 1960. He also did guest appreances as well as the Nestle commercials.

Donald O'Connor was the seventh child of Irish descended circus performers that had made it into vaudeville, which was "The Big Time" in early 20th century America. He bagan dancing and perform acrobatics at age 13 months on stage with his family. With various family members lost and added to the act, The O'Connor Family continued for years, perfroming a variety of entertainment right along with the Three Stooges.

O'Connor was driven to perform the most number of varied acts he could - to the point that one night he worked on a boken arm and did not realize it. He kept working hard and became famous as an actor, singer, and dancer on Broadway and in Hollywood.

In 1944, O'Connor was drafted into the US Army Special Forces, where he entertained troops oversees during World War II. After the war, he enjouyed many years of a long career that added television to the media he mastered.

rriving in the middle of seven children to a Tacoma, Washington couple of Irish Descent, Bing Crosy later studied law in Spokane. He lost interest in that career, or never attained much law interest form the start.

He liked singing and playing the piano and drums. He was in a band early on and he and the piano player traveled to Los Angeles in 1925.IN not too many years, he was singing people through the Great Depression with saongs that dpwnplayed the need for money. After a series of "Road" picures with Bob Hope (The Road To...), he He won the Academy Award for best actor as the priest in Going My Way in 1944. The video below is an Irish song from that picture.

For more about Bing Crosby and the game of golf, read the material from our HubMobster friend William F. Torpey.

This contemporary Irish rock band came together in Limerick in 1990 with lead singer Dolores O'Riordan. The band performs alternative rock, indie/idie pop, rock, post-punk, and pop rock numbres. The Cranberries became internationallly known via their first album, Everybody Else Is Doing It, So Why Can't We? today they feel they succeed further than Sinead O'Connor may have doen in determination and meaning.

The group was one of the most successful rock acts of the 1990s with nearly 15 million albums sold in the US aside from other nations. They earned four Top 20 Albums recognition on the Billboard 200 Chart and eight Top 20 Singles on the Hot Modern Rock Tracks Chart.

The song presented here is Ode to My Family.

The Cranberries - Ode to My Family

Incredibly, in 2009 Celtic Woman is performing the Isle of Hope Nationwide Tour (begun February 13) to commemorate Annie Moore and Ellis Island as well as the contribution of the Irish to America. An International Tour will follow.

Begun in 2004, Celtic Woman has been in the Number 1 slot on Billboard World Music Charts for 95 consecutive weeks to break the former record. Their published music has gone Platinum in the US/South Africa and Gold in Australia/Japan. The vocalist women - Alex, Chloe, Lisa, Lynn, and Mairead - and other performers appear under the direction of Composer/Musical Director David Downes and Executive Producer Dave Kavanagh. A Gallery and Tour Dates are available at Celtic Woman.

More Of the Irish