The mother of all monster movies

King Kong was ranked by the American Film Institute as among the 50 best films of the 20th century. He is one of the most amazing, popular, and iconic characters in the history of motion pictures. His 1933 debut was a legendary piece of pure cinema - simultaneously a terrifying monster movie, epic fairy tale, tragic love story, and deeply resonant cultural myth.

Kong making his last stand atop the Empire State Building is one of the movies' most indelible and iconic images. The greatest of the great apes tragically pursues his helpless, hopeless passion, and 72 years after he emerged from his jungle lair this remains one of the movies' immortal tales of unrequited love. And the heartbroken, heartbreaking look in his eyes as the planes shoot him off the Empire State building remains the greatest single special effects shot ever made.

King Kong is a brilliantly structured adventure movie. The first 40 minutes are all set-up, as wildlife documentary filmmaker Carl Denham (Armstrong) sets sail for the South Seas in search of a rumoured fabulous beast, taking along apple-filching Depression waif Ann Darrow (Wray) because exhibitors have told him his movies won't make any money unless there's a love interest.

Staging a screen test for Ann, Denham dresses her as a fairytale princess ("The beauty and the beast costume") and coaches her in screaming at nothing (a skill required of all who play opposite special effects creatures). "What does he really expect her to see?" remarks a crewman.

The Venture drops anchor off Skull Island, the natives of which live in the shadow of a massive wall. In the wall are a pair of huge doors obviously designed to keep something out. Periodically they sacrifice maidens to the deity ("Kong") that lives on the other side of the fortification. The voyage to Skull Island has been fraught with expectation, as everyone speculates on the dangers or romantic possibilities of the trip. But when the natives kidnap Ann and tether her to a sacrificial altar beyond the giant doors, King Kong stops promising and starts delivering. The second hour of the film, set on two savage islands (the other is Manhattan) is non-stop action. Out of the jungle comes Kong, a giant gorilla who carries Ann off to his lair.

When Denham and Driscoll, plus a crew of disposable sailors, set out to rescue Ann, they come across a whole ecosystem of prehistoric creatures, all of which (paleontological accuracy be damned) want to eat them. The reptiles also want to eat the blonde, but Kong, who is constantly fighting off rivals, is intrigued. In a 30s' racist touch, it's taken as read he was unimpressed by the black girls sacrificed to him over the years and, in a scene censored for years but thankfully restored, peels off her clothes and sniffs his fingers. The ape may be a monster, but he's also an innocent in love. Chief technician Willis O'Brien gives Kong childlike human mannerisms: playing with the corpses of defeated enemies as if wondering where the life has gone, and chewing furiously on any passing human who doesn't meet his standards of beauty.

Carl and Jack rescue Ann and Kong is disabled with gas bombs. In a simple cut he is brought to New York and exhibited on Broadway as The Eighth Wonder Of The World. An elegantly-dressed crowd pay top dollar for the show, which ends abruptly when popping flashbulbs enrage Kong, who thinks the press are out to hurt Ann. He breaks loose, and goes on the rampage. Instead of dinosaurs, he rages against New York's mechanical beasts (a subway train, a flock of biplanes) and scales skyscrapers with Ann again in his huge paw. Atop the Empire State Building, then the tallest building in the world, he makes a defiant last stand as buzzing planes strafe him - the lead crew is played by producer-directors Cooper and Schoedsack.

Mortally wounded, he plunges to the street, where Denham delivers his epitaph, "It wasn't the airplanes, it was beauty killed the beast."

None of the humans - not even scream queen Wray - can compete with Kong. But the film remains a perfect star vehicle. It prepares for its hero's entrance with hints of mystery, violence, eroticism and fantasy, then cuts loose with all the action, adventure and incident you could wish for.

The film endures because of the timelessness of its central story and the care that went into its creation. Using then state-of-the-art special effects - rear projection and stop-motion animation, overseen by effects maestro Willis O'Brien - the film creates a wholly integrated world where the appearance of magical creatures makes absolute sense. The climax with Kong and Wray at the top of the Empire State Building is an eloquent summation of the film's themes of doomed romance and the violent clash between the primitive and the modern, and remains one of cinema's great iconic sequences.

Kong Gets Nasty with T Rex

Kong on the Empire State Building 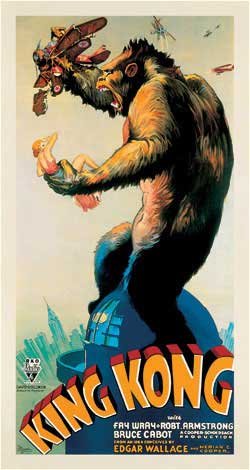