A womb of great modern music

In a little basement room behind a Chinese laundry on West 55th Street in New York City was born a musical relationship that would produce some of the greatest music recorded in the 20th Century. It was in that little room that great composer/arranger Gil Evans (whose room it was) and trumpeter Miles Davis explored their ideas about jazz and put together what famous jazz disc-jockey Symphony Sid (real name Sidney Tarnopol) announced as "something new in modern music" - the nonet which produced the music which would give rise to the so-called "cool school" of jazz and the aptly-titled album "Birth of the Cool."

This album would establish Miles's credentials as a leader at age 22. Great baritone player Gerry Mulligan said of Miles: "He took the initiative and put the theories to work. He called the rehearsals, hired the halls, called the musicians and generally cracked the whip."

Mulligan was one of a group of musicians who would gather in that dark and, by all accounts, rather dingy room, and talk through the theories and ideas, swapping information and experiences and building a huge reservoir of knowledge about jazz performance and theory.

The music theorist and composer George Russell, who died last week and who deeply influenced both Miles and Evans, described this room: "A very big bed took up a lot of the place; there was one big lamp, and a cat named Becky. The linoleum was battered, and there was a little courtyard outside. Inside it was always very dark."

But this room was a dark womb in which was gestated a lot of great modern music.

The Birth of the Cool

The nonet that produced the album Birth of the Cool went into the studio on three different dates and the personnel differed on each date, except for Miles himself, Bill Barber on tuba, Lee Konitz on alto, and Gerry Mulligan on baritone, who appeared on all three dates. The first date was 21 January 1949 with Kai Winding on trombone, Junior Collins on French horn, Al Haig on piano, Joe Shulman on bass, and Max Roach on drums. They recorded the tracks "Move", "Jeru", "Budo", and "Godchild".

The third recording session took place on 9 March 1950 with Gunther Schuller on French horn, Lewis still in the piano chair, Al McKibbon holding the upright, Max Roach back at the drum kit and J.J. Johnson still blowing the trombone. they recorded another great Evans arrangement, "Moon Dreams", "Deception", "Rocker" and the only vocal on the album, sung by Kenny Hagood: "Darn that Dream".

The nonet had appeared before in live dates at the Royal Roost in September 1948, generating little excitement from either fans or critics. "Yet," wrote Ted Gioia in a September 2008 article marking the 60th anniversary of the gig, "with hindsight, we can make the claim that this was the most important jazz band in the world in the late summer of 1948."

Gioia went on: "If you were constructing a family tree for modern jazz in the second half of the 20th century, almost all of the milestone events could be trace back to this one ensemble. It may have been a commercial failure, but it changed the course of American music."

Many of the musicians involved went on to create careers of their own which made weighty imprints on the music. Mulligan, Konitz, and Lewis in particular had stellar and innovative careers.

But the real stars of the show were of course, Miles and Evans, whose greatness was foreshadowed on these dates and would be confirmed a decade later when the two got together again to record three milestone albums which were hailed by British jazz critic Max Harrison as having "a freedom and plasticity that have been surpassed only in a very few works such as Stockhausen's 'Gruppen fur drei Orchester'". High praise indeed for jazz albums. Harrison went on to say that the sounds Evans created were new "not only to jazz writing but to all orchestral music."

Each of these albums was conceived as a total work of art, much like a concerto from trumpet and orchestra.

The orchestrations were rich and produced a sound that was quite new for jazz. It stretched the boundaries of jazz, something Miles was beginning to get quite a reputation for doing. It also opened new frontiers in the relationship between improvisation and written composition, and the relationship between jazz and classical music. Is the track "The Maids of Cadiz (Les filles de Cadix) " merely an arrangement of Leo Delibes' song or a new composition in its own right? Jazz musicians, especially the be-boppers, often "quoted" phrases or sometimes whole lines from other pieces of music in their solos. This track puts a new slant on that, as well as asking questions about the so-called "third stream" in jazz.

The whole album has a sort of wistful feel to it, lacking Miles's usual edge, in part due to the fact that he plays flugelhorn only on all the tracks. This was the only album on which he would use only that instrument.

Ian Carr summed up the album in his biography of Miles thusly: "The music on it glows in the memory. It is profound, delightful, full of confidence and immense optimism. Throughout, there is the feeling that the past is rich, the present enjoyable, and the future full of promise."

The future of promise was not long in coming: in July and August the following year Miles would be back in the same studio with charts written by Evans, this time of his arrangements for Miles of the music of the Gershwin show Porgy and Bess .

This album was recorded in four three-hours sessions and used an orchestra much like that used for Miles Ahead, but it is used rather differently. It picks up on the call-and-response style of much gospel music, with Miles acting preacher to the orchestra's congregation. Miles's sensitivity to the orchestral moods created by Evans is extreme. Listening to tracks like "Gone, Gone, Gone" and "Prayer", in particular, can, as Carr says, literally make the hair on the back of one's neck stand up. Incredible performances.

The track "Prayer" is musically and emotionally the highpoint of the album. Miles's solo is beyond outstanding, beyond category. As Carr writes, in this performance Miles "seems to have cut his way back through layers of experience, through bebop, through early jazz, through western orchestral music, through and beyond the whole western tradition, to the archetypal expression of the black race where the 'field holler' began, and the where the spokesman (soloist) is expressing the aspirations of a complete and homogeneous society." Totally engrossing music that is impossible to ignore once you have listened to it.

The whole album is just superb and a musical experience of great depth of feeling and thought where everything seems to be meant to be just as it is. Miles called it "the hardest record I ever made."

Again the music asks questions about the relationship between the original composer and the arranger and soloist. To quote Carr again: "They do more than justice to Gershwin's great opera, transforming it, deepening it, and uncovering roots of which even Gershwin was probably unaware." 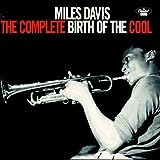 The Complete Birth of the Cool
Buy Now

This relationship with composed music was brought to another level by the album Miles and Evans would start planning in 1959, which started with Miles hearing for the first time Joaquin Rodrigo's Concierto de Aranjuez for guitar and orchestra.

"After. listening to it for a couple of weeks I couldn't get it out of my mind," Miles said later.

Evans began to research other Spanish music and came up with Manuel de Falla's ballet music El Amor Brujo from 1915, from which the track "Will O' The Wisp" is derived.. He also wrote three pieces based loosely on Spanish folk forms called "The Pan Piper", "Saeta" and "Solea".

An orchestra was assembled in studio which had to take 15 three-hour sessions to complete the takes necessary, and then producer Teo Macero spent another six months putting the album together. He used for the first time on a jazz album a number of stereo tricks: "We had the bands going off the side and one band going in the middle and then coming back and splitting it and going to the sides again" he said.

On the track "Saeta" some of these effects can be heard.

Once again this album asks questions about musical relationships and in particular the whole western tradition of "classical" through-composed music to the more demotic music usually denoted by the term "folk" - the blues in the United States, and what Miles saw as the Spanish equivalent of the blues, flamenco. He summed up the difference between the two traditions as "the difference between talking to a Spanish nobleman and talking to a gypsy."

As Carr notes, "Miles Davis is plumping for the values of the gypsy."

This album is perhaps one of the most accessible of Miles's output for listeners who are not much into jazz per se. For this reason it has been dismissed by some as "elevated light music" and "not jazz" - to which Miles made the very appropriate response, "It's music and I like it." What more can one say, really?

Just that Evans's arrangements are quite exceptional and the whole production superb. More than that, just enjoy the thing, damn it!