Alongside her multiple studio albums, Namie Amuro has also released four best of/compilation albums that chronicle four very different aspects and eras of her career. From her early TK years, to her dabbling in RnB, to creating her hip-pop image, Namie has proven that she's a legendary chameleon in the history of J-pop.

"181920" is Namie's first best album, released in the first month of her hiatus in which she took time off to have and take care of her son. It chronicles all her singles from when she was 18, 19, and 20, from her official solo debut "Body Feels EXIT" to her most recent at the time, "Dreaming I was dreaming". In addition it has the two most popular singles of her life with "SUPER MONKEY'S", "TRY ME" and "Taiyou no SEASON". A few years later it was re-released as "181920 & films", which also contains all the corresponding videos.

"LOVE ENHANCED" is Namie's second best album, and contains her singles from her hiatus until "I WILL". It shows the transition from her TK melodies to her more urban songs. The album was more of a self-cover album, as it contains mostly new arrangements and even tracks with new vocals. It also contains her "song+nation" project single featuring VERBAL. Sales wise, the album marked Namie's decline in popularity at the time.

"BEST FICTION" is Namie's third best album, and her best selling yet. It contains all her singles from "Wishing On the Same Star" to "60s70s80s", plus two new songs. The album represents her shift to "hip-pop" music, and proved Namie's reemergence as the dominant force in J-pop, as it charted at #1 for more than one week and had a long chart life. It was the #2 album of 2008 and won a Japan Record Taishou Award. The covers were purposefully over-photoshopped to represent the "fiction" element of the title.

"Checkmate!" is Namie's first themed compilation album. It contains all her "best" collaborations with other artists throughout her career, most notably other urban artists. Four new tracks were recorded for the album, including the hits "Wonder Woman" and "make it happen". The album was originally slated for release in March, but the Great Tohoku Earthquake of 2011 delayed the release by one month. 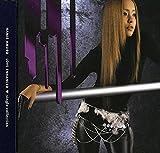