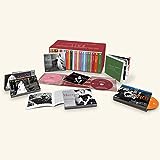 "An opera begins long before the curtain goes up and ends long after it has come down. It starts in my imagination, it becomes my life, and it stays part of my life long after I've left the opera house."

Maria was born in New York City on December 3, 1923 and was given the name Cecilia Sophia Anna Maria Kalogeropoulus. She was the daughter of Greek immigrants George and Evangelina. They shorten their last name to Callas when Maria started grade school. At the age of 7 (seven), Maria started classical piano lessons. However she soon lost interest due to her undying passion for singing and acting. Yes, at 7 she knew what she wanted to do, and would not persue anything else! In her teens, Maria's parents seperated and she moved to Greece with her Mother. There she studied under Elvira De Hildalgo at the Royal Academy of Music. At her young age it was forbidden for her to enter that school. However, she was seen as such a special performer that an unprecedented exception was made. At the age of 16 she performed at the Royal Opera House of Athens in Boccaccino. In her early 20's she scored her first leading role in Tosca. In August of 1947, she made her Italian debut in La Gioconda at the Verona Arena. From there, she became an international sensation.In 1954, Maria made her American debut in Norman, at the Lyric Opera house in Chicago. By 1960, her health, carreer and marrage started to decline and eventually, all 3 crumbled. She divorced due to an affair, and the died far too young at the age of 53, on September 16, 1977.

Master Class is the story of Maria's life. On the silver screen, Academy Award winning actress, Faye Dunnaway portrays the legend herself. In the Broadway Play, Tyne Daly plays her.

Please read on to see where she is ranked. The 12 Best Opera Singers of all Times. Read over 30,000 times!