About the Band Nightrage, How it Was Formed, Members for the Debut Album, and Musical Style

Most fans of melodic death metal wouldn’t associate Greece with melodic death metal but there is at least one well-known example of it. The band Nightrage is one example of this type of band. The band was formed in Thessaloniki, Greece by guitarist Marios Iliopolous and his good friend Gus G. The band may as well have been formed in Sweden because the vocalist for their debut album Sweet Vengeance is vocalist Tomas Lindberg who is from Sweden. The bassist for this album is Frenchman Brice Leclercq who would leave the band after the album. The music of Nightrage is a mixture of Dark Tranquillity, In Flames, and Arch Enemy basically making them into a hybrid of Swedish melodic death metal.

For this first album by Nightrage, you could say that they were an international sort of lineup because they had members from Greece, France, and Sweden.

Analysis of the First Five Songs

The album begins with the fast and hard-hitting song called The Tremor. The truth hurts for people who choose to not accept it. The vocals sound like Jacob Bredahl and in some cases, Marco Aro but the voice of Tomas isn’t as a low harsh of a growl but more like a higher raspy kind of harsh style if that makes any sense. There is that influence of early In Flames for those of you that remember the album Whoracle. When the sun sets, it seems that a person’s perspective can change. Hero is a song that is very much influenced by Swedish band In Flames. The song is basically about a person that thinks they are a hero but they really are not a hero because their visions have been lost. Note: having a personal vision or a mission statement is critical because it gives you an idea of the path that you may want to take for your life. On a related note, one of my missions is to provide viewers with interesting reviews and commentaries on the various genres of heavy metal. The end of the song Gloomy Daydreams features some impressive Colony era influenced guitar work. Colony of course is the brilliant 1999 album by the band In Flames.

Analysis of the Second Half of the Album Sweet Vengeance

The song In My Heart brings awareness to the subject of what it feels like to have life on this Earth and for some people, life is like hell and there is no paradise for them. It depends on how you analyze life itself, whether you choose to look at the good or the bad things in it. The song Ethereal is a philosophical view about life as a person seems to be dead on the inside and they are not really living their life’s true purpose or values. The song Circle of Pain is a song about the fact that some people that we considered as friends are actually not friends but they are people that will lie and deceive us wanting to take advantage of us in any way possible. The band also really explores in depth the flaws of human nature including hate, misery, greed, and superficial words which really mean nothing in the grand scheme of things. The album ends with the acoustic instrumental called The Howls of the Wolves.

"At the Ends of the Earth"

How Good of an Album is Sweet Vengeance?

Overall, Sweet Vengeance is a very good album from this Swedish and Greek band but it does not quite measure up to other bands in Sweden which is okay because often times, a band’s debut is just a measuring stick for how they can thrive. Or does this album measure up to Swedish melodic death metal bands? This is a subjective opinion but Nightrage may be the best melodic death metal band in all of Greece. On further analysis, the vocals also kind of sound like a variation of Jacob Bredahl formerly of the band Hatesphere.

How Does the Album Sweet Vengeance Feel Like In 2020 & Beyond?

"The Howls of the Wolves"

Rate the album Sweet Vengeance by the Band Nightrage

A Map of Thessaloniki, Greece the Birthplace of the Band Nightrage 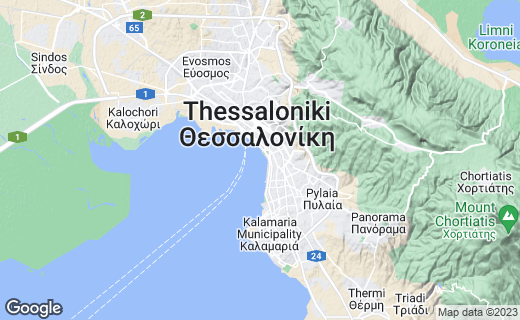