No Tomorrow is the second album by underground rap artist Shua. Once again this up and comer delivers hard hitting beats and biting lyrics drawn from events in his personal life. He's young, he has big dreams, and his pissed. With topics ranging from people holding him back from doing what he wants, relationships, and commentary on the state of the world, Shua doesn't pull any punches on the people he knows, the general populace, or the corporate elite.

The demon within doesn't play as big of a role in "No Tomorrow" as it did in "The Great Below" but it's presence is still felt through the anger Shua displays in this album. Anger and self-doubt, many of us can relate regardless of what our dreams are. We don't like people looking down on us for pursuing big goals and it's quite cathartic to listen to someone who has these same feelings and basically giving a giant middle finger to those people and the inner demons in all of us.

One of the first songs on the album, Dead Weight is symbolic in the sense that he's cutting out all of the people holding him back from fulfilling his aspirations. In his own words, he's cutting the dead weight from his life to show the world that he is great. Anyone who tells him that he's not going to make it has no place in his life. He's shooting for the stars and no one is going to stop him.

"No Doubt" is about Shua dealing with the inner demon telling him no one cares about his message and he is doomed to failure. But every time he thinks about quitting, something else comes up and he mans up to push through that self-doubt. He can't bring himself to give up his goals, and if he has to shatter that inner demon repeating what critics say about his music, he's going to do it. By the end of the song, you can't help but root for him, knowing that he comes out of that self-doubt with confidence that no matter what happens, he's going to make his voice heard.

No Tomorrow is a much more mellow toned song, Self-doubt comes back as a role, before giving way to Shua's anger at the human race due to our tendency to treat each other like crap. But there may not be a tomorrow for us, so why live like we're guaranteed another day? Shua is out to show himself at his best every day. It's an attitude we should live up to, we don't know when our time will come. Wouldn't you rather be remembered as the friendly neighbor who did anything for others rather than some selfish jerk who wouldn't help another person unless there was something in it for you?

Pissed off Shua is back in full force, lashing out at women who reject him for his aspirations. It's one of his darkest songs, full of pure anger and spite at womankind. I can't help but feel this song is a quite misogynist and it's one of the few songs from Shua that I honestly don't like. Both sexes can be ignorant and try to drag us down with them into their unhappiness, and not everyone is like that. Keep your head up, Shua. You'll find that someone who supports your dreams and isn't hanging around because they want your money.

The final track on the No Tomorrow Album is considerably more upbeat and positive. He finally completely overcomes that self-doubt, seeing other people going for their goals and reaching varying levels of success and thinks to himself, "why not us?" It's a nice way to end the album, accepting that he may never become a big star and have his message heard by millions, but that's not going to stop him from trying. A lot of people want to be famous but are afraid of failure, and Shua shows that that's just a self-defeating attitude to take. As a writer, I take this song to heart when I'm working on various ideas and stories. I have that crippling self-doubt that most, if not all, artists go through. But why not me? It'll be better to at least say that I tried to be the next best selling author than resign before my feelings get hurt. 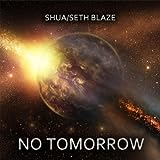 No Tomorrow [Explicit]
No Tomorrow, available as an album or individual songs.
Buy Now