What are the Strike Witches?

Strike Witches is a popular anime and manga story about female girls in the military in the year 1944. This lovable series is full of action, girls, and guns.  The main reason why the strike witches were formed was unidentified flying objects called Neuroi were attacking the planet and the military couldn’t compete with their aircraft. There powers are shown being in use when their tails and ears, all a different animal. Each witch has its own special abilities but all can use a striker unit. A striker unit is the machine they were around there legs that amplifies there natural witch powers for incredible speed and shields. The plot line follows a witch named Yoshika Miyafuji (age 14) who is enlisted into the army, regardless of her hate of the war. The series channels all emotions, sadness and happiness resulting in an awesome story. Oh yeah, there is a twist – the strike witches don’t wear pants.

The 501st Joint Fighter Unit (Strike Witches) Consists of 11 girls ages 12-19 that are all from different countries around the world.

Yoshika is the main focus of the story. It is her story being told throughout the anime. She is fourteen years old and is from the Fuso Empire. Her special power is to heal people and her parents owned a clinic. The Striker Unit was the genius design of her own father. She was afraid of war and didn’t want to take any part in it, although she really wanted to help people. After a ship from her homeland was attacked by the Neuori and she was forced into combat and helped the ship survive was she willing to take part in the 501st Joint Fighter Unit.

Mio is the squadron leader of the 501st. She is the one who went out to search for Yoshika and asked her to come with her as her powers would serve much better in the war then being a healer. She is the oldest of the witches at age nineteen. She is the only other witch from Fuso. A veteran fighter, she is the oldest and most mature and disciplined of all the witches. Her power has her possess a magic eye that helps her find the core of the Neuroi ships (the target to destroy.)

Minna is a ranking officer in the group. She cares about everyone’s life in the group after losing her own lover in the war. It is because of this she gave the command that the witches could not come in contact with any of the males in the military.

Lynette is one of Yoshikas best friends in the group. She is from the Britannian Commonwealth and the middle child of eight siblings. Her very domestic attributes are from taking care of her brothers and sisters at home.  Lynette ends up becoming the sharpshooter in the series. Her magical abilities allow her to supercharge her power into shots she can fire. 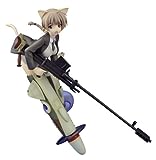 Perrine is a wealthy 15 year old Gallian girl who looks down on others for their less-refined habits.  She is always on edge and is always upset with Yoshika for whatever she does. Her magic ability called Tonnerre makes it possible for her to strike down multiple targets at once.

Erica is a 16 year old ace. She alone has over 200 confirmed victories and is ranked Flying Officer. Ironically to her ace combat skills she is really a sloppy person who ignores choirs and doesn’t really care what’s going on. Her power named Sturm manipulates gusts of ether to attack enemies.

Gertrud, 18, is a Flight Lieutenant who is quiet, efficient, and private. She supports the witches from the shadows. Her magic power gives her physical strength that givers her outstanding strength to the extent she could move a large steel girder more than 10 times larger than herself. Her darkness is mostly because of her younger sister named Chris who was injured during the invasion of her county. Her little sister looks somewhat like Yoshika, leading to past memories effecting Gertrud at times.

Francesca is the youngest of the witches at age 12. She is a native of the Duchy of Romagna and is currently a Pilot Officer. She is childish, self-indulgent, and ignores training and duties to do what she wants or to wonder off and take a nap. Her magic allows her to generate energy in front of her and then blast it forward.

Charlotte is a 16 year old girl from United States of Liberion. She is tall and fully grown in apperence. Her attitude is one of a thrill-seeker who loves to see how fast she can go. Just like a speedy hair, her tail and ears of that of a rabbit. Charlotte, due to her mechanical skills became the first person to break the sound barrier. Before enrolling in the 501st she was also a motorcycle racer who broke the land speed record on Bonneville Salt Flats using a modified Indian motorcycle identical to one used by legendary New Zealand speed bike racer Burt Munro. Her name was changed to Shirley Yeager for the English version.

Eila (15) is a top ace whose hobby is fortune telling with tarot cards. Her features are a black fox and that reflects her mischievous approach to life.

Sanya who is 13 is enlisted out of the Orussian Empire. During the day she prefers to stay inside in the dark of her room. She is nocturnal in nature. During the day she falls asleep on her feet as she runs the night watch to make sure Neuroi don’t attack at night. She isn’t used to people and gets somewhat anxious when around others.

The Strike Witches collection dvd contains the complete season one of the anime series. Both English and Japanese only discs are available so make sure you get what you pay for! (The English contains both languages and is more expensive currently.) The two dvds involve Strike Witches 01 -12 all episodes of season one. An extra iron on Strike Witches 501st Joint Fighter Wing patch comes in the box also.

Strike Witches is also a manga and light novel. The manga contains the original characters and the way the writer planed, although the anime is just as good.

Will you watch Strike Witches? If you seen it did you enjoy it?

Hopefully this helped you get to know the witches a little better and learn a little more about the series. I personal give it a 5 out of 5 stars and it also was voted “Jury Recommended” during the 12th Japan Media Arts Festival Awards (2008). So for a great story, pretty girls, and yes a little Strike Witches fanservice then Strike Witches are the way to go! This anime series was released to the US in English early April 2010.

Please give this hub a thumbs up, share it with your friends, and click here to check out some of my other articles!