According to the author's note at the beginning of this book, this novel was originally published by Jack Higgins in 1962 under the title of The Testament of Casper Schultz.

There was no mention in the original book of the name Martin Bormann, who was Adolph Hitler's private secretary and number two man in Nazi Germany.

It was only by changing the title and deleting all references to Bormann, that Higgins was able to get his publisher to accept the book for publication in 1962.

At the time of original publication, which was the same year the story took place, the Cold War was at its height and a mere 17 years had passed since the formal cessation of hostilities between the Allied and Axis powers in Europe.

Technically it would be another 28 years before a peace treaty - known as the Treaty on the Final Settlement With Respect to Germany or the Two Plus Four Agreement - between the former Allied powers and Germany was signed in Moscow on September 12, 1990 which officially ended World War II in Europe.

In addition to the periodic capture of top Nazi war criminals such as Adolph Eichmann in 1960, there were frequent rumors of sightings of Martin Bormann in South America and other places.

Despite the periodic tales of Bormann sightings, Martin Bormann has never been located or captured.

With the war still fresh in everyone's memories and a need for a united front in the Cold War, it was not a good time to bring up tales of prominent people, including former government officials in the Allied governments, who had quietly or not so quietly sympathized or even collaborated with the Nazis in the early years of the war when the outcome was still in doubt. 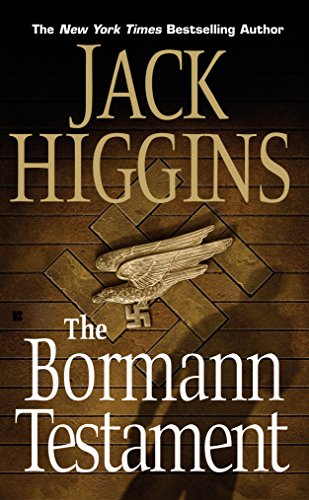 By 2006 these concerns had vanished and Higgins was able to republish the book not only in the form originally intended but, in Higgins' words, with a little more as well.

A Secret Agent is Awakened in the Night

The story opens with British secret agent Paul Chavasse, being awakened by a telephone call shortly after collapsing, exhausted into bed.

Having just returned from a brutal assignment in Greece which has left him totally exhausted, both physically and emotionally, he needs rest.

Despite the late hour and Chavasse's exhaustion, his Chief orders him to report immediately. Loyal agent that he is, Chavasse quickly responds to the request and hurries to report for the new assignment.

A man, claiming to have knowledge of Martin Bormann as well as being in possession of a manuscript containing Martin Bormann's memoirs, has approached a British publishing house after being turned down by a German house.

Chavasse is given the assignment of going to Germany to meet the man, known as Hans Mueller, in order to verify the existence and authenticity of the manuscript as well as obtain it before others learn of its existence.

He is also charged with tracking down Bormann through Mueller. Since the manuscript supposedly names names it is sure to rouse the interest of many.

These would include the Western powers, the Soviets, the Israelis, ex-Nazis hiding in high positions in West Germany as well as prominent people in the West who once had close ties to the Nazis.

To assist Paul, who will be traveling under his own name but, as his cover, pretending to be the publisher, is Sir George Harvey.

Sir George is a former Minister of intelligence in the war time British government and now a wealthy investor who holds a major equity interest in the publishing company in question.

Traveling on the same ferry and train to Germany as Paul, Sir George will be available to be called in, if needed, to add to Paul's credibility as the publisher.

The assignment turns out to be anything but simple and, as with Higgins' other spy thrillers, is packed with action and surprises.

A Glimpse Inside the Mind of Secret Agent Paul Chavasse

In addition to action and drama, the reader is given insight into the emotional make up and drives of men like Paul Chavasse.

A chance encounter, following the first mix-up in plans, with Mark Hardt, a young Israeli agent, causes Chavasse some moments of introspection.

Hardt is a believer and is motivated by a cause which, in his case, is avenging the Jewish victims of Nazism by hunting down and bringing to justice the Nazis responsible for their deaths.

Chavasse, already somewhat emotionally burned out, finds the idea of working for a purpose appealing. For Chavasse spying is a profession in which getting the job done right is the main driver in his life.

Reflecting on his life, Chavasse comes to the realization that the job has become the main focus of his life to the exclusion of everything else.

He is even forced to admit to himself that, had he been born a decade or two earlier in Germany rather than England, he could just as easily entered the same line of work for the Nazis. In a way it is the job, not the employer and not loyalty to the nation that motivates him.

In this respect Chavasse is much like Sean Dillon, Higgins' hero of later novels. Dillon, an ex-IRA terrorist and later freelance terrorist who, despite the cold blooded detachment he brings to his job, still retains a touch of humanity.

In Dillon's case, he is duped into flying a mission of mercy to aid some orphaned children in Serbia during the troubles in Bosnia and ends up the prisoner of a super-secret British intelligence organization. When given the choice of death by firing squad without trial or changing employers, this ex-IRA terrorist easily switches sides and goes to work for British Intelligence.

While Chavasse spends his career with British Intelligence, he is forced to admit that he is motivated more by his near addiction to the adrenalin rush that comes from a total focus on a job that continually brings him face to face with death than to any cause.

Links to Some of My Other Book and Movie Reviews

Chavasse cares for Anna and seriously considers leaving the service and marrying her.

Anna, however, she sees through him and knows that he has become so dependent on the adrenalin rush that is an integral part of the profession that he has chosen that he will never adjust to normal middle class life.

In this way Chavasse is much like a drug addict who periodically looks wistfully at normality but cannot break his dependency on chemical stimulants.

The main difference here is that while the drug addict satisfies his cravings by ingesting the external chemicals his body craves, men like Chavasse satisfy their cravings by forcing their bodies to produce the desired chemicals internally.

Like all Higgins novels this one is fast paced with lots of the action that readers expect in any thriller of this nature. But its true strength is in the character development. Finishing a book like this is very much like meeting and getting to know a new friend very well.

Higgins tends to use the same agents in many of his novels, with new insights into their lives and personalities with each new story thereby allowing us to get to know and develop a friendship of sorts with fictional individuals like Paul Chavasse and Sean Dillon.

Like all forbidden fruits, there is a certain allure to the secret agent life style and there is a part in many of us which, despite the danger and emotional havoc, is attracted to that life style.

Fortunately, a combination of common sense and cowardice keeps us from throwing caution to the wind and becoming secret agents ourselves.

Both Paul Chavasse left his job as a lecturer in languages at a university, and Sean Dillon who abandoned his acting career, in order to embrace a career that requires them to continually put their lives on the line.

However, as readers, we have found a way through the novels of Higgins, Buckley, Ludlum and others, to vicariously experience the thrills of the secret agent life through fictional characters like Chavasse and Dillon while still enjoying the physical and emotional safety of normal middle class life.