The History Of Motown Records

Do you like good music?  Without a doubt, some of the best music that has ever been produced came out of a small little recording studio in Detroit, Michigan.  What started as a small loan to a barely known songwriter became known as Motown Records that produced some of the greatest talent in music history.

Berry Gordy was a local songwriter in Detroit who wrote songs for Jackie Wilson. In fact, Gordy was the author of Wilson’s Lonely Teardrops that was a huge commercial success. However, Gordy did not receive much of the credit or money from Lonely Teardrops and decided that the money was in producing and distributing music.

In 1959, Gordy’s sisters started a small record label. They asked Gordy to be the label’s President. However, Gordy had plans of his own. In that same year, Gordy started Tamla Records with an $800 loan from his family. Tamla’s first signed act was The Matadors, which eventually became the Miracles. The Miracles lead singer was Smokey Robinson.

Smokey Robinson and the Miracles became an instant success. Gordy then merged the Tamla record label with his new label, Motown Records under the corporate umbrella of Motown Record Corporation. records to Motown Records, the nickname of his native Detroit. Motown Records incorporate Tamla’s successful acts including, Barrett Strong, Mable John and Mary Wells. Later, Motown had its first #1 hit with the Marvelettes “Please, Mr. Postman.”

During the 1960s, Motown Records produced 110 top ten hits.  Performers under the Motown label including Smokey Robinson, Stevie Wonder, Marvin Gaye, The Supremes, the Four Tops and the Jackson 5.  Motown also later signed The Temptations under Gordy Records.  In all, five different labels made up Motown Records.  The amazing part is all were produced at the little recording studio located at 2648 West Grand Boulevard, Detroit, Michigan, also known as Hitsville, USA.

The Move To Los Angeles

In 1967, after a few acts left Motown over royalty disputes, Motown Productions was created to produce television shows featuring Motown artists.   Shows included Dianna Ross and the Supremes and the Jackson 5 and were very successful productions spanning all racial and generation lines.

By 1969, the Motown operations had been gradually moving towards Los Angeles.  In 1972, Motown moved all of its operations to California in an effort to build on its early television success and begin to make motion pictures featuring Motown artists.  In all, Motown produced many films including the highly successful movie “The Wiz” in 1978.

Throughout the years Motown lost some of its biggest acts including Gladys Knight. Yet, Motown always found new acts to take their place. During the 1970s and 1980s Motown produced records by Lionel Richie and the Commodores. However, by the mid 1980s, Motown was losing money and Berry Gordy was forced to sell his ownership in Motown Music Corporation and Motown Productions. Motown Productions became de Passe Entertainment. But Motown kept producing successful music acts through the 1990s including Boys II Men and Johnny Gill.

By the end of the 1990s, Motown had such stars as Brian McKnight and Erykah releasing records on one of its labels. However, in 1998 Motown became part of Universal Music Group which reunited Motown with many of its original producers and early labels. Today, Motown as it still exists still produces albums. Many of the great artists that got their start in the Hitsville Studio left Motown but many have returned. Stevie Wonder is the only artist from the early period to stay with Motown his entire career.

Motown Records celebrated its 50th Anniversary in January of 2009. As part of the celebration, A Complete Box set of Motown’s #1 hits was released. But nothing beats the music Motown produced in the early 1960s that introduced the world to amazing talents including Stevie Wonder and Michael Jackson. 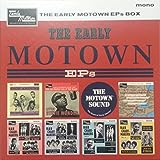