The Other Side of Down by David Archuleta (Album Review)

David Archuleta is my favorite male pop singer. I can not even begin to describe to you just how much his second album The Other Side of Down means to me. This album was release back in 2010 but I still listen to it quite frequently. It's great for walks and working out. It's great for lifting my mood.

I know that my review on this album is really late but now that I have had the album for a long time and it is ingrained to my soul I think I can probably give a better review and something a little more in depth now that I have most of the lyrics and melodies memorized.

When I first heard "Something 'Bout Love" in August of 2010, I knew I had come across something really special. That song had me hooked from the first listen. Not only did it have powerful vocals but additionally a great message. The hook of the song is my absolute favorite when David sings, "Don't fight! Don't hide those stars in your eyes! Let 'em shine tonight!"

Do you know what that means? That means you can be yourself and let your love shine to the world and those around you. Life is hard. Love is hard. Archuleta explains that "there's something about love that breaks your heart - it sets you free." I'm sure the meaning of the lyrics can be taken in many different directions. (That's what great about music in general - individual interpretation and feeling!) But I think it's easy to sum up this single: love conquers all!

Music Video for Something 'Bout Love:

So, unfortunately the album sells for The Other Side of Down were not so hot. The album to date has only sold somewhere over 60,000 and the record label Jive later dropped David from their roster. Of course, to me album sells only matter because when I love someone's music I want to see them do well. And that means coming out with new material. Major record labels are ruthless. If they are not making bank off an artist then they get dropped. Thankfully, David was picked up by an independent label called Highway Records and released a new CD called Begin. in the summer of 2012.

The Other Side of Down: A Positive and Driving Force

The reason David Archuleta's The Other Side of Down is so good is because it is a positive and driving force of its own. It doesn't matter how bad of a mood I am in, when I stick that CD in the player my life becomes better. This album is all about making you feel better. It's all about the message of trying not to let life get you down because at the end of the day all that matters is that you take a step back, relax, and try again.

"I might get tossed around, but I'm always bouncing back!"

"One foot in front of the other, no, no, no, nothing's going to break my stride!"

I like the themes that are presented and I love the flow of each song. The Other Side of Down is special and worth listening to on YouTube, iTunes, Apple Music, Spotify, or other music services.

Thank you for supporting music! 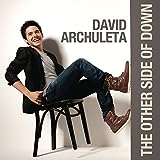 The Other Side Of Down
Buy Now