50 Things You Did Not Know About Zombies

We have all seen them, shambling mounds of deranged former humans devouring the flesh of the living. They travel in hordes ever ready to attack the living. Some have limbs missing, others have jagged broken teeth. Reality is this simple creature known as the zombie is misunderstood. I am going to list a few facts about our gentle friend you may not know.

These facts were collected by dedicated men and women and some zombies that were unidentifiable but very cooperative. Each fact comes from at least 7 minutes of hard work and labor. We must express that you take the warnings in this text serious, Heaven forbid you disprove one of these facts and we have to hunt you down and.... well, never mind that. Just be careful when dealing with zombies.

The Library where zombies roam 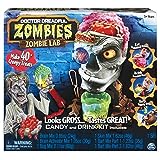 How You Gonna Do It?

How will you kill a zombie

Most zombies are not that bad at all. In fact they are simple creatures full of wonderment.