All music lovers have their favourite albums, and will always make up a top ten, This is my  list of the top albums of the 1970's, and of course in no particular order.

The 1970's was a fabulous decade for music , with a great variety, and some of the great albums of the era remain timeless, and are still selling today.

Pink Floyd-The Dark Side of the Moon

Pink Floyd began life in 1967 formed by Syd Barrett on guitar and vocals, Roger Waters on guitar, Nick Mason on drums and Rick Wright on keyboards and later joined by guitarist David Gilmour who replaced Syd Barrett.Dave mason joined the band for Darkside, and many voices were used including the tour manager and roadie! Paul McCartney's voice was recorded but never used

This was Pink Floyd's eighth album, and is almost a mental jigsaw puzzle,there are messages in every song. Where there are no words the instruments paint the visual picture for ourselves.

Recorded at London's Abbey Road studios,it took more than eight months to produce- an exceptionally long time for it's day.The album was launched at a special listening session at London's Planetarium in February 1973. It has sold over 50 million copies, and seemed to be forever in the charts during the 70's and 80's.

The first single taken from the album was Money - which included a rhythmic accompaniment  created from the sampled sounds of clinking coins and cash registers.

The symphonic  Great Gig In The Sky  was sung by Claire Torry, who's  rangy vocals complimented Richard Wright's beautiful piano contribution making this one of the classic tracks.

The darkside won a Grammy award for the best engineered album. and is considered by many critics as an all time truly unique  classic masterpiece of music. 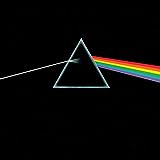 The Dark Side of the Moon [Explicit]
Buy Now

Many people may regard On The Run as dull, but this instrumental track gives you the feeling that you are on the run!The running footsteps, heavy breathing, the airport voice a reminder of always having to keep moving,and the synthesizer lends itself well to this track.The explosive ending lets your imagination wonder where you have ended.

Time is an amazing Floyd song.It starts off with clocks ringing and then goes into a subdued intro with eerie drum sounds.Then it bursts into the verse.A timeless classic.

And remember that "There's no dark side of the moon, really; Matter of fact, it's ALL dark