An Idiot Abroad: One of the funniest TV shows ever

Who wouldn't like an all expenses paid trip abroad to see the fabulous Seven Wonders of the World? Form an orderly queue please - I think that most people would jump at the chance.

But this DVD shows probably the only person on the planet who really didn't want to go on such a wonderful trip, Karl Pilkington.

Who is Karl Pilkington?

He's an ordinary lad from Manchester. He's happy in places he knows. He's never wanted to gallivant round the world. When he was younger he traveled a few times - to Wales.

He thought that was pretty foreign and exotic - he couldn't understand why they wouldn't speak English - England is, as he says, just down the road.

This isn't an acted comedy show - this is Karl's genuine experience. He's egged on, tormented and laughed at (a lot) by the team back in England, Ricky Gervaise and Steve Merchant who find his comments and observations hilarious. So do I and millions of other viewers.

The Great Wall of China

His first televised travel was to China. Completed bemused by the public toilets, the unusual dietary habits and the way that the writing is upside down and back to front, he was baffled by the Great Wall of China. Alright, he said, you can see it for miles, but you can say the same about the M6 - and at least you can drive on that.

iPods but no toilet doors?

Karl has, to say the least, a pretty strange - but hilarious - view of most of the things he encounters.

One of the first things he notices is that toilet cubicles have no doors.

How is, he asks,that iPods are made in China and yet they're not capable of knocking up a few MDF doors?

You can see more of this in the video below.

With the phenomenal success of the first series of the show, they just had to continue and it's just as funny as the first.

Idiot Abroad, An: Season 2
You'll want more, that's for sure. And although we watch new episodes on BBC America, we need to have the DVDs so we can watch them at anytime. They are two funny to watch just once - we like to enjoy them over and over again.
Buy Now 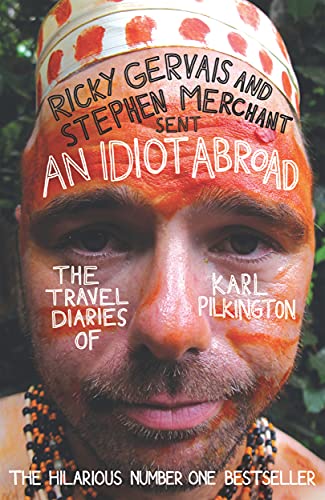 An Idiot Abroad: The Travel Diaries of Karl Pilkington
This book is the perfect companion piece to the DVDs of the TV series. Check out the images below - some are quotes from the TV program and others are from the book - all have me laughing in no time.
Buy Now

Politically incorrect and quite bit of bad language.

I love it! The video below shows Karl on a visit to China. As they are filming, he decides to pop into a public loo for a pee. This is not what he expects at all...

You'll see more episodes in the related videos at the end.

What is it about Karl Pilkington and abroad?

There are, strangely, some english people who are far happier at home in Britain rather than anywhere else. I say this, but maybe other nationalities have those people too?

For many of us,the idea of travelling to other countries means adventure and new experience, but not to Karl evidently. (Mind you,I can't see anyone enjoying the public conveniences in the video above).

Our country is known as the British Isles. As an island nation, we are seafarers, travellers, adventurers. Mostly. Karl Pilkington is one of the exceptions.

The Wonders of the World? Karl would rather be sitting on the sofa at home with his missus, Suzanne, and be enjoying a bottle of beer, a few bags of crisps and watching some good old English telly.

Travelling abroad wasn't an option for many British people in the middle of the twentieth century and many people, especially men, had seen enough of foreign climes when they'd served in the forces in the Second World War.

But in the late 1950s and early 60s, air travel became more and more affordable for the average person. Pioneers of the travel industry developed package holidays - an all-in price for air fares and hotel accommodation.

Places such as southern Spain,Ibiza and Majorca suddenly had a huge influx of visitors from Britain. And what would you see on signs in café windows? In English...

That says it all perfectly, I think.