Thousands of toys and promotional items have been created for fans of The Beatles Yellow Submarine movie since the animated film first premiered in London on July 17, 1968. Learn about variations to the classic Corgi Toy submarines and see the Yellow Submarine figures made by Funko, McFarlane Toys and Rock Iconz.

Two new figures of the Yellow Submarine and Captain Fred were issued in February 2014, as part of the Funko Pop! Rocks series of rock 'n' roll musicians.

These stylized figures have quickly become collector's items, like the original Yellow Submarine made by Corgi, one of the most prized of all Beatles toys. Find the best vintage memorabilia, clothing and Beatles books, art and gift ideas.

John Lennon, Paul McCartney, George Harrison, Ringo Starr and the Blue Meanie have their own Funko Pop collectable character. Captain Fred and a newly sculpted Yellow Submarine toy will be released at the New York Toy Fair in February.

The original Corgi Toy, Serial No. 803 from 1969 is made of metal and rolls on wheels, which causes the periscopes to rotate. There are several known variants -- look for different colors of the hatch doors. This model was produced until 1997 when No. 05401 was issued with some minor changes to the same basic design and size. The box for the 1997 series has a top flap that holds a collectable Beatles Corgi Toy Catalog.

Four unique Beatles figures (2 inches tall) are included in the 1999 limited-edition Corgi Yellow Submarine No. 05403, packaged in a black box. Another edition with this serial number was issued in the year 2000 using the original white and yellow hatch doors.

A smaller "mini" Yellow Submarine Number CC05404 came out in 2000 with hatch doors that are open all the time with the Fab Four, and non-rotating periscopes. Number CC05801 is also a mini-sub, created in 2002, with yellow hatch doors that are permanently closed. Compare photographs of the all different models with descriptions by Model Collector UK.

Every hobby and profession has a unique language, and toy collecting is no exception. Get to know the terms you'll find when searching for rare toys...

McFarlane created two series of Beatles Yellow Submarine figures. Series 1 was originally released in 1999 and the complete set includes the Love Hand, Jeremy, Captain Fred, and a fantastic Blue Meanie figure. The floating Yellow Submarine in McFarlane Series 1 is fine in the bathtub with the kids. Series 1 was reissued in 2004, due to popular demand, and the Saturday morning cartoon Beatles toy figures were issued the same year.

Series 2 came out in 2000 and the figures are spectacular. First, the Beatles are dressed as members of Sargent Pepper's band, each playing an instrument. The "minor characters" that come with each package are perfect renditions of the psychedelic monsters from the animated movie: Apple Bonkers, Snapping Turk, Sucking Monster, and the awesome four-headed Bulldog. 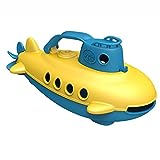 The same great movie from 1968, digitally remastered in 2012 with high-resolution animation and available on DVD and Blu-Ray disc.

Blu-ray disc. The limited-edition CD comes with a booklet of Beatles history and notes about the recording sessions. "For a limited period, each CD will also be embedded with a brief documentary film about the album" with archival footage, rare photographs and unreleased studio chat.

Yellow Submarine
Remastered at the Abbey Road Studios to keep the sound quality of the original recordings.
Buy Now

A set of five, hand-painted and numbered statues from Rock Iconz.

Each 8" figure comes with a certificate of authenticity in a series limited to 4000 pieces. Note: The submarine sold out immediately.

Five Statues of the Beatles in costume and the Blue Meanie are available online.

Happy Christmas and Merry New Year from the Beatles

The Beatles cut record for all the members of their fanclub every Christmas with songs and music, spoken word nonsense, laughter and general craziness from the lads.

Funko Pop! Rocks catalog - Part of the huge collection of figures made by Funko

The Sea of Time - Time to see the Yellow Submarine Movie!