Why I'm making this page about Burl Ives, America's Balladeer

I'm making this page about Burl Ives, America's Balladeer because I think Burl Ives is one of the most overlooked artists in music history. Burl Ives' voice is perfect for the folk ballads which he loved to sing and sang throughout the decades of the the 30's and 40's and into the 50's. Of course, you know by now, if you know me, that I'm especially partial to folk music and I especially like folk groups, but I would just as soon hear Burl Ives singing solo as to hear a group like Peter Paul and Mary, or The Kingston Trio, although all have the great sound which characterizes folk music.

Between solo folk artists, I would rather hear Burl Ives any day than Pete Seeger or Woody Guthrie. Don't ask me to define it, I just feel that Burl Ives' voice is more suited somehow to the folk genre. Later, and ironically during the folk revival of the 60's Burl Ives turned to country music, probably due to his testimony before the house un-American activities committee, which testimony Pete Seeger referred to as a betrayal of himself and other folksingers and of the cause of freedom. (For more click the Wikipedia link below). but I still say Burl Ives' strong suit is folk music.

In case you haven't heard him, take a listen:

Burl Ives' activities in the 50;s: 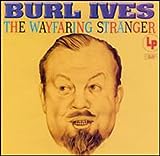 In 1960, he expanded the "The Return of The Wayfaring Stranger" album with Columbia Records into a 33 1/3 LP album. The album had the same type of traditional folk songs as the original album. I had both. They make a nice set. Here is the 2000 CD, (below). [From the Amazon Editorial Review:]" A long-out-of-print collection of wonderful Burl Ives performances, reissued with the original liners plus 11 bonus tracks-almost doubling the length of the original release! Includes John Henry; Billy the Kid; Mule Train; Old Blue; The Worried Man Blues; Wayfaring Stranger; River of Smoke; Lady from Laramie , and 15 more." 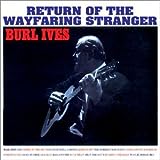 From the 60's to the 90's he became more involved with television, starring in the series "The bold ones."

Also in the 60's, during the height of the folk revival, Burl Ives, for some reason (perhaps that which I stated in the intro.), began singing more country music than folk, popularizing songs like "Little Bitty Tear Let Me Down, " "Mr. In-between" and "My funny way of laughing." (For a more detailed bio, click the blue Wikipedia link above.)

But, if you ask me, Burl Ives' best suit was definitely the folk ballads and the best albums you can possibly get of his songs are the two ones that are listed above, which consist of all folk ballads.

Having smoked pipes and cigars most of his adult life, Burl Ives died in April 1995 of complications of mouth cancer.

In case you haven't heard Burl Ives' country songs, - take a listen to these two videos::

In the first one,country star, Johnny Cash introduces him as America's Balladeer. There are some folk songs in the medley but I put it here for the first song, which is definitely country.

Country song 1: "A Little Bitty Tear" (along with some folk songs with Johnny Cash)

Burl Ives even tried his voice at singing children's songs. I don't think it's his bet suit, but, he does seem to relate somewhat to children. Listen to one of them below and make up your own mind.

Complete Burl Ives: Folk, Country and Children's songs, all in one place:

The 4CD set below is a great mix of folk, country and children's songs, so if want a full sampeling of Burl Ives, that's the one to get. But if you want only his folk stylings, stick to his 2 "Wayfaring Stranger" albums listed above

Poll: DO YOU AGREE?