How To Compose Music with Sibelius Software

You will see links to work I have published on-line with this and other programmes and an opportunity to buy Sibelius software.

Images from my own photo collection, please do not copy.

My experience of computer music before Sibelius

I never was much of a techno wizard. I am one of those people in life who find it hard to figure a microwave oven out or programme a video, so computers made a slow start in my musical life. I was convinced they had a future though. At school in the early 1970s I belonged to the Maths Club and together with many friends and two brilliant maths teachers, Mr Edward Higgs and Mr Leo Solomon (also a renowned jazz pianist) we entered a competition to win a computer terminal. Yes, I said terminal... it was basically a keyboard and a modem connected to a University Mainframe in Manchester I think, and yes, we won it for a music project. Our idea was to programme a computer to write Mozart and crazy as it seems now, we did....

A terminal, a phone line and a mainframe....

Half the club - the crazy muso ones - analysed Mozart's melodies to try to find rules, the other half collated them into tables and probabilities and our magic teachers wrote a programme in Basic computer language to do the job. It was a hit!

We had a year's free modem connection to the mainframe and after that it faded from use as the cost of the hook up was so expensive.... How times have changed! It started with the earliest little home computers in the 1980s and now we have our own powerful computers at home and can link with millions of others via the internet.

Just think, now we can not only compose and publish our own music, we can even design mugs with dancing camels for sale - and they do....

Well, how can you have Mozart and Sibelius together unless they are in your CD collection? Apart from arranging Mozart in the style of Sibelius? That would be rather grand, but I don't intend to go there - too much music of my own to write in too little time - BUT I have heard it speculated about!

What would Mozart have done with sibelius software? Do you know, I don't think Mozart needed it. I think that Mozart had one of those Asperger genius type brains that consider all possibilities simultaneously. One of the type of genius brains that could become a grandmaster at chess, or tell you without thinking for longer than 15 seconds not only what day of the week Elizabeth the First was born on, but precisely how many hours elapsed between her birth and Elizabeth the Second's!

Wouldn't it be something to have a brain like that? Well, yes, but it would be so very, very noisy! I know when I compose (with sibelius) the themes bounce around for days afterwards and I can't think or sleep straight. Think what that would have been for Mozart! That is some internal orchestra!

I have worked with every version of Sibelius from 1.8 up to 5.2 and I recently bought myself an upgrade to Sibelius 7. For the educated musician with some competence in computing, Sibelius is the industry standard notation software. The student version is less expensive and more appropriate for Students learning the basics about music. 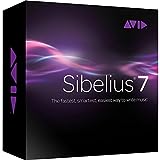 Moving and Developing Over Time

So in the late seventies and early eighties the personal computer happened. The little 64K Spectrums and Ataris for gamers, the educational BBC B, which I never could figure how to start up... The Amstrad word processor I proudly bought. The Amigas which always crashed when you tried to run Music X.... Then the PC with Windows and the Apple Mac in rivalry.

I saw that great things could be accomplished with the early music programmes if you could get by the fact that school computers crashed as often as they performed and then I read about a new phenomenon.... Sibelius 7. This was a programme that only ran on Acorns at the time and the price of an Acorn and Sibelius software was twice my department's small capitation allowance. I went to the Headmaster, an IT enthusiast, and said I would be willing to buy the software for myself and the children to use if he bought the computer. Unbelievably in retrospect, when virtually every school now has multiple site licences and several computers in its music departments, he refused. Little did I know then that he was writing me out of the script at the school for financial reasons nor did I know when it finally blew up that getting out of that school was the best career move so far....

In 1997 I was made redundant. I replaced the Amstrad with a Tiny PC, took two years out as a private guitar teacher and in 1998 I auditioned for LMS eventually becoming a fulltime guitar teacher. In 1999, my line manager introduced me to Sibelius 2 - a world away from the early prototype that ran on Acorns - and I was off making my own arrangements and compositions for students. Most impressively, they looked like real music unlike the handwritten manuscripts I had been handing out for years. In time, I got up the courage to put some of my compositions and arrangements on line for the world to print off - some free, some for $1, others for a little more and even now I find it so uplifting to see people worldwide buying my music or using my free stuff. It is a hobby, but one that continues to grow, and I wanted to share it here....

After much careful thought I decided to open a store on the Sibelius Music site.

I chose a good time - right when they are in the middle of upgrading the whole site to a new version - but I opened my music store selling music downloads of original pieces and arrangements. Many of the pieces are for guitar, or groups with guitar and other instruments. At the moment a favourite combination is guitar and flute and I have some folksong arrangements that are doing well. I hope in the near future to be able to record some vocals and upload them for some of my songs....

Again, I have to say if I can do it, so can anyone with a little technical knowledge. Although music has been a lifelong passion and I work as a professional the whole thing with computer music is that anyone who understands how instruments should sound can do something. It is an advantage to have musical knowledge, but I even know of game designers who write their own themes without playing a note!

Who knows, one day you might even be able to sing the notes in! You can certainly input with all sorts of midi instruments and I use just the normal computer keyboard. Good luck with your sibelius composing everyone!

Self publishing technology and Lulu.com

Originally available on Amazon, but withdrawn with Market Reach, these popular books are now exclusive to Lulu and are also available in Epub format.

An exciting development - ... new Kindle DX can be used as a pdf music reader

The new Kindle DX also handles MP3s. It is more practical for musicians to use as a notebook. As yet it works from pdf files, but if Amazon and Sibelius were to get together and set it up to run with the Scorch Direct X application it would become a very powerful educational tool indeed for musicians and educators!

Computers make all sorts of things possible for everyday users. Sibelius has been the way forward for so many....

Software in the UK

These links go to Amazon.co.uk

If you are a UK reader and interested in any of these products it will be disappointing that they are unavailable, so the links in this module will take you to Amazon in the UK.

Digital Interface for recording guitar and vocals on your computer:

Visit me on Sibelius Music - My Homepage

Some of this music is free to download and print but you need to allow Scorch, an active X programme, that will print your score out for you.

My latest arrangements are three Chopin Mazurkas for guitar duet.

At the moment editing scores is not easy. Why is it that websites and software designers feel the perpetual need to fix what ain't broke and give you something less user friendly in return? Any, enough grumbling, suffice it to say that for now all new scores are in "Other" until the sorting bug is fixed! :P

This video documents a visit from Green Spaces to Liquorice Park, and a little bit of leafy fun. I arranged the Vivaldi for guitar group and composed the Dance of the Fisherman and the Sea Nymph for flute duet using Sibelius and NCH software.